On the first day of 1942, Gilbert Roberts, a 41-year-old retired British naval officer turned game designer, arrived at Derby House, in Liverpool, for his inaugural meeting with his new boss, Sir Percy Noble.

The admiral was greying but still youthful, and wore his authority with, as one observer put it, “naturalness.” That day, however, Noble was in a hostile mood.

“I thought the Admiralty were sending me a captain,” he said, woundingly. Noble explained that he had been instructed to give Roberts the entire top floor of Derby House, comprising eight rooms. There, using wargames, Roberts and his team of Wrens, young members of the Women’s Royal Naval Service, were to get to work on the problem of the U-boats which had, for the past three years, sunk millions of tons of essential food and fuel making its way from the east coast of America via merchant ships. The U-boats, it seemed, had developed an effective tactic that had, to date, evaded the Allied navy, tasked with repelling their attacks. Roberts and the Wrens planned to use wargames to identify this tactic.

Noble – 52 with a headful of hair and a trim waistline — was well liked and respected by his staff, whose opinions he would often seek regardless of their rank or seniority. Still, he couldn’t quite mask his skepticism toward Roberts’ enterprise.

“Well,” Roberts recorded his new commander-in-chief saying. “You can carry on but don’t bother me with it.”

Stinging from Noble’s remark, which reignited the dismay that he felt from his earlier dismissal from the navy, Roberts labored his way upstairs to the top floor of the building.

His plan was simple. Using the floor as a giant board, the Western Approaches Tactical Unit, or WATU, would design a game that approximated a wolfpack attack on a convoy in the Atlantic. One team would play as the escort commanders, the other as the U-boat captains. They would take turns to make their moves, firing torpedoes, dropping depth charges, the U-boats diving and surfacing to make their attacks, the escort ships wheeling around in great arcs as each side hunted the other.

These games would be based on real battles that occurred at sea to allow participants to see why the escort commanders acted the way that they did, and whether they might have lost fewer convoy ships and sunk more U-boats had they done things differently.

One of WATU’s first tasks was to restage a battle from a few weeks earlier, in December 1941, in which the British ships had successfully hunted three U-boats. Roberts and his team believed that this, the battle for convoy HG.76, held the secrets they were searching for. The team arranged 48 ships in 12 columns. Then they added the tracks of the three U-boats known to have participated in the battle, U-434, 574 and 131.

The stage set, Roberts began to move the convoy, which spread across six white lines on the floor to represent its six-mile width, in two-minute intervals and at a simulated rate of ten knots. Each move was made in precisely the same pattern as the actual escort a few weeks earlier.

Blow by blow, Roberts imitated the action, as per the official reports. Seeing the battle from a crow’s-nest perspective above the board, a question formed in his mind. If the U-boats were firing from outside the perimeter of the convoy, as was widely believed, how had HMS Annavore, which was in the center of the convoy, been sunk? Might it be possible, he wondered, that the U-boat had attacked the ship from inside the columns of the convoy?

There was, he reasoned, a simple way to prove his theory.

“Hold everything,” Roberts told his staff, as he rushed into his office to make a phone call.

Roberts picked up the receiver and asked the operator to put him through to the Flag Officer Submarines in London, hoping to speak to its chief of staff, an old friend, Captain Ian Macintyre.

To Roberts’ astonishment, the flag officer himself, Admiral Sir Max Horton, picked up.

Roberts explained who he was and asked Horton if he might be permitted to ask a question. During the last war, Roberts asked, would you ever have crept among the ships of a convoy to fire a torpedo?

“Of course,” replied Horton. “It is the only way of pressing home an attack.”

“Thank you, sir,” said Roberts, then hung up.

It was late, but Roberts asked Jean Laidlaw, a 21-year-old woman responsible for statistical analysis, and one of the younger Wrens, Janet Okell, to stay behind with him to reset the plot and run a new game on the giant board. They hurriedly reset the game. This time, Roberts placed a U-boat model in the center of the columns of the convoy and ran the events of the battle in reverse. If the range of its torpedoes was around two and a half miles, it was reasonable to imagine that U-boat captains would fire from less than half that distance, in order to maximize their chances of scoring a direct hit.

Between them, Roberts and the Wrens began to plot different scenarios that might have enabled the U-boat to sneak into the convoy without being detected. Only one checked out: the U-boat must have entered the columns of the convoy from astern. And it must have done so on the surface of the water, where it was able to travel at a faster speed than the ships it pursued. By approaching from astern, where the lookouts rarely checked, the U-boat would be able to slip inside the convoy undetected, fire at close range, then submerge in order to get away.

Roberts and the Wrens headed to the kitchen to make coffee and a round of corned beef sandwiches. The conversation continued to center on the battle they had left on the floor of the game room. The group discussed how if they were a U-boat captain having made a point-blank-range attack on a merchant ship, they might attempt to escape unharmed. The game had enabled the fledgling tacticians to think like U-boat captains, and from that perspective the answer suddenly seemed obvious: having made your attack, you would of course dive. Then you would sit and wait for the convoy to roll overhead.

With the hidden U-boat tactic abruptly unveiled, Roberts wanted to try out some potential countermeasures that might foil the plan. The team returned to the game room. Roberts assumed the role of the U-boat captain, and Laidlaw and Okell played as the escort ships. A countermeasure revealed itself immediately. Rather than splay out from the convoy at speed, dropping depth charges at random, as was current common practice, Laidlaw and Okell lined the escort ships up around the convoy. While the convoy continued on its way, each escort ship performed a triangular sweep, listening for U-boats. They immediately picked up the position of the attackers.

It was, by now, the early hours of the morning; in all the excitement time had passed unnoticed. Roberts ordered a staff car to return the two women home. The next morning Roberts invited the skeptical Admiral Percy Noble to watch a demonstration of their findings.

Noble entered the game room flanked by his staff. The commander-in-chief warily eyed the chalk markings on the floor, and the canvas sheets decked out like ship portholes. What was all this make-believe nonsense?

Undeterred, Roberts began to explain their discoveries — how the U-boats would slip between the convoy ships on the surface of the water, at night, when they were unlikely to be spotted, make their attacks, and then dive to wait until danger had passed.

The atmosphere was frosty. Noble had made no secret of his condescending skepticism towards WATU’s work. How could this former naval officer, with his nubs of chalk and jumbles of string, contribute anything to the battles being waged out at sea?

But as the game played out the Admiral began to sit forward in his chair in astonishment. One of the Wrens, playing as a U-boat, fired a torpedo from within the convoy’s columns, then dived. Roberts performed the team’s newly developed counter-tactic, moving the escort ships in triangular sweeping patterns designed to flush out the hidden U-boat. While performing the sweeps, one of the escort ships “picked up” the Germans’ position on its radar.

As he watched Noble saw, for the first time, the cardinal errors that had been responsible for such tremendous loss of life at sea. When the demonstration was finished, the Admiral stood to his feet, congratulated Roberts and asked what the maneuver was to be called.

Laidlaw explained that she had christened it Raspberry.

It was, she said, a razz of contempt aimed at Hitler and his U-boat fleet.

The commander in chief then turned to one of his men and told him to take down a message to be sent to the Prime Minister. “The first investigations have shown a cardinal error in U-boat tactics,” he said. “A new, immediate and concerted counter-attack will be signaled to the fleet within 24 hours.”

Adapted with permission from A Game of Birds and Wolves: The Ingenious Young Women Whose Secret Board Game Helped Win World War II by Simon Parkin, available now from Little, Brown and Company. 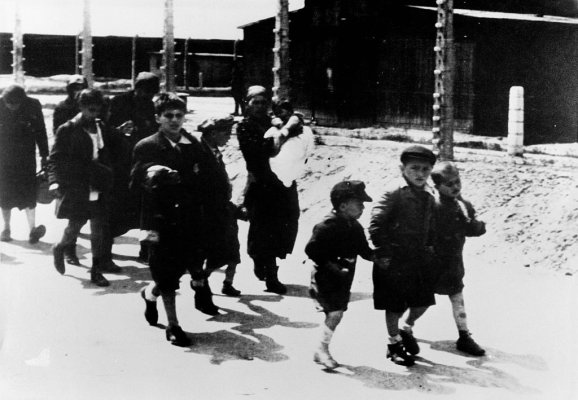 A Surprisingly Large Percentage of Young French People Don't Know About the Holocaust, Study Finds
Next Up: Editor's Pick