The World Economic Forum’s annual meeting, informally known as Davos for the Swiss ski town where it’s held, is typically a conference about the economy and geopolitics. It makes sense that in 2020, as Australia burns and activists turn out by the millions, Davos approximated a climate conference.

The conversation held over the past few days showed that it’s become impossible to ignore reality: a warming planet is reshaping geopolitics and threatening the economy as we know it. Around the halls of the conference center in Davos, CEOs and government ministers, politicians and celebrities, talked about big solutions to fix that. They discussed how GDP has failed us as a metric of societal health and the need for new government support for climate mitigation.

“I don’t want to be naive, but I want to acknowledge that the center of the global economy is now saying things that many of us have dreamed they might for a long time,” Al Gore said at a dinner convened by WWF International. “They’re saying them forcefully and eloquently.” The question is, where does that conversation lead us?

A Clear and Present Crisis

Most people with even the loosest familiarity with the science of climate change know that it poses a long-term risk that could lead to drowned coastlines and charred cities. Yet, for years it remained a secondary issue for corporations concerned with short-term earnings and government officials who didn’t view it as a kitchen table issue. For that reason, it remained on the margins of conferences like Davos, which instead centered around the economy. “I can remember when climate was talked about in a tent outside,” Rachel Kyte, a long-time climate leader and the dean of the Fletcher School at Tufts University, told me.

What’s changed is the growing immediacy: climate change has become a clear and present crisis. Australia is on fire. Heatwaves struck much of the world last year, including Western Europe. And, in the last five years, the cost of climate-related disasters in the U.S. topped $525 billion, close to a third of the cost of natural disasters since 1980. Meanwhile, climate activists have forced corporate leaders to at least say they’re listening.

The risks posed by climate change were underscored even before the conference began, with the release of the WEF global risk report. All five of the top risks in terms of likelihood touched on climate and the environment, including extreme weather events, failure to slow emissions and invest in adaptation, and biodiversity loss.

These fiscal risks helped drive the conversation around climate change in Davos. Just a few days prior to the start of the conference, BlackRock, the world’s largest asset manager, said climate change would lead to a “fundamental reshaping of finance” and promised to rethink its strategy. “Usually, the conversation immediately pivots to sort of far off long-term risks,” Brian Deese, BlackRock’s global head of sustainable investing, told me in Davos. “Those risks, while they do accelerate out into the future, are more pressing on the market today than most market participants understand.”

That was underscored by an announcement in Davos from the International Monetary Fund that climate change “already endangers health and economic outcomes.”

Meanwhile, companies made new commitments to protect nature and biodiversity, acknowledging nature’s centrality to their supply chains. And a group of investors—called the Net-Zero-Asset Owner Alliance—committed to having a zero-emissions portfolio by 2050 grew to more than $4 trillion in assets. “Momentum is growing at an incredible pace,” said Edward Mason, head of responsible investment at the Church of England, which joined the alliance at Davos. “It really feels like we have reached a tipping point so that we can do this.”

Towards a “Better Capitalism”

But despite all the talk at Davos, that change is still not happening fast enough, and many say the efforts that have been made are too piecemeal. In perhaps the most publicized moment of the week, Greta Thunberg said “pretty much nothing has been done, since the global emissions of CO2 have not reduced.”

Of course, a lot has been done, but those efforts are also far from adequate. Global temperatures have already warmed 1° C since the industrial revolution and are on track to rise to 3°C even if governments follow through on their current commitments, blowing past the Paris Agreement’s target of keeping temperature rise well below 2°C.

And, while investors and corporations wield enormous power, there is widespread agreement among experts that actually tackling climate change—to the extent that it can be tackled—will require governments to step up in a major way.

There are a range of different approaches to tackling climate change, and at Davos leaders politely discussed which they preferred. But the discussions were much broader than wonky policy concerns like how to structure a carbon tax (though there was plenty of that). Broadly, participants discussed how to end the multi-trillion giveaway that fossil fuel producers receive in the form of subsidies and whether we should move away from GDP as a measure of societal wellbeing. “The version of capitalism we have today in our world must be reformed,” said Gore.

It’s fitting, then, that the official theme of this year’s Davos gathering was “better capitalism.” Around the halls, political leaders and business honchos talked about the need to rethink our political and economic system, in large part to address climate change and its byproducts. They chatted about the challenge of growing inequality, and many shook their heads at President Trump’s speech cheering economic growth and dismissing climate change. “Our capitalism must be sustainable; it must allow us to fight against global warming following a rapid and credible calendar,” Bruno Le Maire, the French finance minister told reporters, according to a translation. “We must move quicker.”

The question is, when push comes to shove, will all the talk about changing the system amount to anything more than words?

There are a number of challenges ahead. For all the corporate leaders that say they will tackle climate change, there are others that aren’t so interested. As while some investors move away from heavy polluters, other remain ready to swoop in hoping to make a quick buck.

Jennifer Morgan, the executive director of Greenpeace International, described the dynamic as a “tension” between the companies that see themselves as part of the solution and “an old energy” driving companies that operate with business-as-usual assumptions. A Greenpeace International report released during Davos showed that 24 banks that attended Davos this year financed the fossil fuel industry to the tune of $1.4 trillion between the adoption of the Paris Agreement and 2018.

Governments have their own challenges. Some, like the U.S., aren’t responding at all. Others, like the EU, have done a lot already, picking the low-hanging fruit, making further reductions more challenging. Meanwhile, developing countries still need to figure out how to continue to grow their economies while limiting the increase of their emissions.

At Davos, there was widespread commitment, but not always detail. This year will be a critical test of whether we cans get that detail as governments prepare to make new commitments to reduce emissions under the Paris Agreement ahead of the November UN climate conference in Glasgow. Davos was a good start; leaders are talking. Now they need to act. 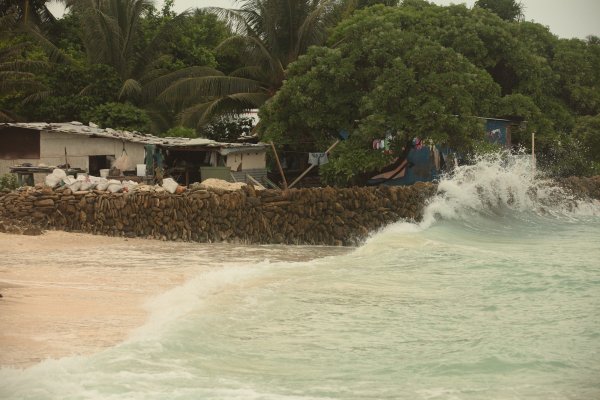