Hundreds of Thousands of Protesters March in Iraq Amidst Growing Anti-U.S. Sentiment

A new sign greets travelers leaving the Baghdad International Airport, with white-on-red Arabic letters on a shrapnel-pockmarked wall. It proclaims the spot is the “the site of the American crime,” where on January 3rd, a U.S. drone strike killed Iranian general Qasem Soleimani and Abu Mahdi al-Muhandis, deputy leader of Iraq’s government-sanctioned armed groups and a legendary anti-ISIS commander among the country’s majority Shi’ite community.

Another sign of the anti-U.S. sentiment in Iraq: the quarter- to half-a-million Iraqis who peacefully took to the streets of Baghdad on Friday to protest the killing and demand all American troops leave the country. The gathering was a disciplined but undeniable display of the growing resentment of the U.S. military mission that had been welcomed in 2014 to fight ISIS, and a clear signal of how the rising political fortunes of pro-Iranian Iraqi politicians like march organizer Shi’ite cleric Muqtada al-Sadr could hasten the departure of U.S. troops.

“Sadr was on good behavior today because he wants now to be known as pragmatic politician instead of Molotov-cocktail-throwing politician,” one senior U.S. official said of the march, speaking anonymously to describe the precarious security situation of U.S. diplomats in Iraq. The U.S. Embassy in Baghdad was attacked on New Year’s Eve by Iraqi militiamen who surrounded and breached the compound’s gates over a 24-hour period before Iraqi security forces finally intervened. Two Iraqi officials estimated Sadr’s Friday crowd reached 500,000, but the senior U.S. official put it at “two-hundred thousand marchers, not the million he’d called for.” Nevertheless, the U.S. official added, “He’s still a force to be reckoned with.”

Sadr, a longtime political enemy of the U.S. whose armed militia used to target American forces during the U.S. occupation of the country, ordered his followers on Friday not to enter the security zone housing the embassy, and they listened. It’s part of a policy of non-violent resistance agreed upon by Sadr and other top Iraqi militia leaders in the wake of Soleimani’s death. The leaders met in Qom, Iran, roughly two weeks ago, according to a senior Iraqi official, choosing to convene outside Iraq partly out of fear that they too might be targeted or at the very least, surveilled, after the Soleimani-Muhandis killing.

The march shows the rising power of the pro-Iranian blocks in Iraq despite months of violent popular protests directed against Iran and the parties allied with it that led to the resignation of Iraq’s now-caretaker Prime Minister Adel al-Mahdi. “This gave them a boost politically to the pressure him… to follow through with kicking U.S. troops out,” the senior Iraqi official told TIME.

The hobbled Iraqi leader has been grappling with how to enact a parliament vote demanding the exit of U.S. troops after the U.S. attack, whose ouster al-Mahdi has publicly embraced even as he has privately slow-rolled the action. He fears a total American pullout will prompt the departure of Western troops who have been training Iraqi security forces as part of the anti-ISIS coalition, and drain the country of international investment.

Those concerns have done little to shift opinions on the street — or the demands of politicians like Sadr whose political fortunes are allied with Iran and its long-term goal of removing U.S. troops from the region.

For now, al-Mahdi, who largely derives his political power from the Iranian-aligned groups, has been able to delay immediate action, as he does a “risk assessment” on how the withdrawal would affect the ISIS fight. His hesitation has also been leavened by President Donald Trump’s threats to sanction Iraq and force it to pay for improvements the U.S. military made to an Iraqi air base if U.S. troops are expelled. “We are happy to continue the conversation with the Iraqis about what the right structure is,” Secretary of State Mike Pompeo said at a State Department news conference, after announcing U.S. troops would be staying put.

On that front, the Americans and Iraqis may find some common ground. “The status quo is unacceptable, but a full withdrawal is unacceptable as well,” a senior Iraqi official involved in the discussions says. “We still have a common enemy called Daesh (ISIS) which we can’t just forget…but we need to redefine the U.S. role. Spying on Iran and assassinating generals won’t work,’” he said. Alternatives like NATO taking over the mission might appease public sentiment, he suggested, and restore the Iraqi government’s trust in American forces.

It’s an idea that is apparently on the table in Washington. “We’re at an early stage in looking at what NATO can do to expand the mission it already has in Iraq,” Amb. James Jeffrey, U.S. Special Envoy to the Global Coalition to Defeat ISIS, told reporters Thursday. “We have said that we’re not interested in talking about withdrawal because we don’t think we should withdraw; however, at the end of the day, this is obviously an Iraqi decision.”

“There’s a lot of people who want us to stay in Iraq as partners,” said Joey Hood, the former deputy of the U.S. Embassy in Baghdad, now the Principal Deputy Assistant Secretary of State for Near Eastern Affairs, in a Friday interview on Iraq’s news and satire program, the Albasheer Show.

He defended killing Soleimani on Iraqi soil. “It was not a choice so much as a necessity. This guy…was not only planning attacks on Americans, he had actually started carrying them out,” referring to the 2019 rocket attack that killed an American contractor in Kirkuk and the Iranian proxy attack on the U.S. embassy. “We needed to take action as soon as we could and where we could…It’s unfortunate that these sorts of things have to happen. We don’t want Iraq to be a battleground for anyone.” 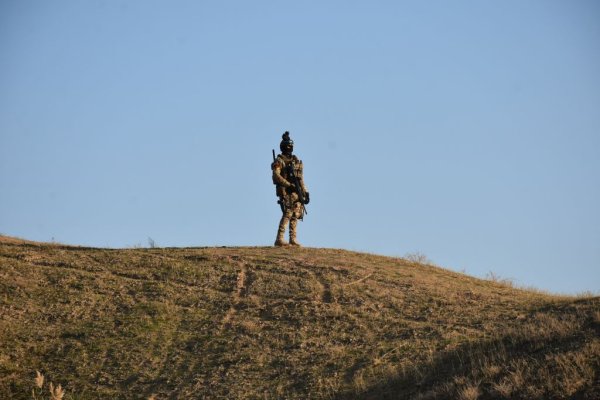 Why Iraqis Are Worried About an Islamic State Resurgence After Soleimani's Death
Next Up: Editor's Pick