Roger Federer of Switzerland serves during his Men's Singles third round match against John Millman of Australia on day five of the 2020 Australian Open at Melbourne Park on January 24, 2020 in Melbourne, Australia.
Getty Images—2020 Getty Images
By Sean Gregory

Australian John Millman, facing Roger Federer in the third round of the Australian Open on Friday evening down under, was leading 8-4 in a fifth-set tiebreaker, just two points away from pulling off the upset. But Millman’s end came soon enough, in a typical Federer flurry. A backhand winner, via Federer’s magic wand of a tennis racquet. Millman committed unforced errors, as Federer refused to relinquish the point. A Federer drop shot. Federer ran off six straight points, thanks to his angles and agility, still strong at age 38. He won the match, a 4-6, 7-6, 6-4, 4-6, 7-6 epic, to advance to the fourth round, in which he’ll face Márton Fucsovics of Hungary.

Federer enters the 2020 season seeking a cushion on his Grand Slam record. He’s won 20 Grand Slam singles titles, more than any other male player ever. But Rafael Nadal is chasing him down: Nadal won the French Open — his ridiculous 12th — and the U.S. Open in 2019, to give him 19 Grand Slam championships for his career. Federer last won a Slam two years ago, at the Australian Open. Novak Djokovic, who won the Aussie Open and Wimbledon — over Federer in the final — in ’19, is also in very much in the mix, with 16 career titles.

The tightening Grand Slam race is tennis’ most enticing subplot of the season. Federer could face Djokovic in the semifinals of this Australian Open, and Nadal in a potentially tantalizing final.

Federer, however, insists he’s not as focused on his Slam total as fans and media. “At the end of the day, I don’t play tennis just to protect that record,” Federer told TIME before the start of the tournament. “I‘m actually here to create my own story.” For Federer, breaking the Grand Slam record was a career pinnacle: he passed Pete Sampras, who won 14 singles titles, at Wimbledon in 2009, when he outlasted Andy Roddick in the final, winning the fifth set 16-14. “That was my moment,” says Federer, “anything else I always said was a bonus.”

Would Federer prefer to hold the Grand Slam record forever? Of course. But if Nadal, Djokovic or someone else down the road surpasses him, Federer swears he’s “totally at peace. Totally at peace.”

He’s already began planning for his future. Late last year, Federer announced he was becoming an investor in On, a Swiss footwear brand. Federer plans on being much more than a passive participant in the company: he’s a passionate sneakerhead, and he’ll be involved in the design of On shoes. Federer joins the growing list of superstar athletes who are doing more than simply signing rich endorsement deals with big companies (though Federer still has plenty of those, with companies like Uniqlo, Rolex, Credit Suisse). LeBron James has a production company; Tom Brady has his TB12 health imprint. Federer, however, hasn’t looked to other athletes for business inspiration: Federer said he was unaware of James’ production company, SpringHill Entertainment, until I mentioned it in conversation.

“I really have to do it my way, with my life, with my family, with my background being from Switzerland,” says Federer. “I listen to what my heart and my tummy tells me I should or shouldn’t do.”

His business instincts seem to be paying off. Team8, the agency he co-founded with his longtime agent Tony Godsick, reps none other than Coco Gauff, the 15-year-old American wunderkind who knocked off defending champion Naomi Osaka at Rod Laver Arena on Friday. Federer will stop playing tennis at some point. But his influence on the game isn’t going anywhere. 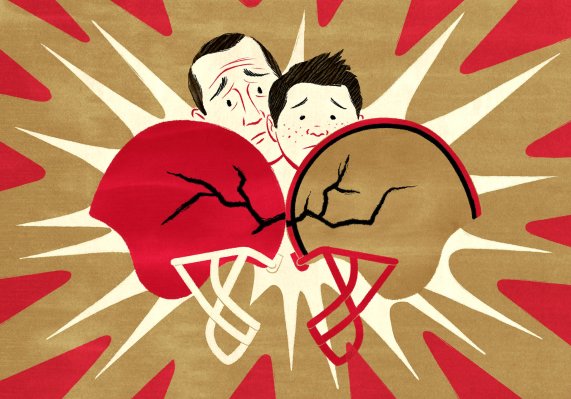 Is It Unethical to Watch Football With Your Kids?
Next Up: Editor's Pick