Face masks and hand sanitizers are becoming must-have accessories from Hong Kong to Japan as a deadly virus spreads across Asia. The only problem is getting hold of them.

Pharmacies across Hong Kong sold out of masks aimed at preventing viral infection, prompting authorities to say more will arrive next week. Taiwan banned the export of masks for the next month to ensure sufficient domestic supply. In Macau, authorities said sales would be restricted to a maximum of 10 face masks to residents or authorized guest workers who can present a valid ID card.

Regular hand-washing, face covering and avoiding crowds are becoming the main line of defense as Asian residents seek to avoid catching the new coronavirus, which in China alone has killed at 25 people and infected more than 800. The rapid spread of the disease has prompted Chinese officials to restrict travel for at least 30 million people and limit Lunar New Year celebrations.

Patients with the infection have been found across Asia, including Singapore, Vietnam, Hong Kong, Macau, Japan and South Korea.

At Cheung Tai Dispensary in Hong Kong’s financial district, supplies of masks and sanitizer ran out two days ago, and medical gloves are selling fast, according to an employee who only gave his surname Lee. The factories that make the products are closed for the Lunar New Year holidays, he said, which means they won’t be able to restock for at least another week.

“We are aware there is panic buying in the market,” Matthew Cheung, Hong Kong’s second-highest official, said at a press conference on Thursday. “A few batches of new face masks will arrive next week.”

Factories that are open are ramping up production. In Japan, plants that supply personal care company Unicharm Corp. have been working around the clock since Jan. 17 after orders increased ten-fold, according to spokesman Hitoshi Watanabe.

U.S.-based 3M Co. said it’s increasing output and working with distributors to ensure sufficient inventory to meet demand and supply existing customers, according to a spokesperson.

Demand is only likely to increase as shoppers stockpile across the region.

In Japan, Li Xing, 28, and Lei Xiaoqiang, 31, spent more than 6,000 yen ($55) at Welcia, a drugstore in Tokyo, to buy seven boxes of masks and other packages for themselves and their families. The Chinese tourists were visiting the city for four days, having departed from Shenzhen in southern China.

“In my country, in my home, they can’t buy masks” because they’re sold out, said Lei. The government has told everyone to wear them, he said. 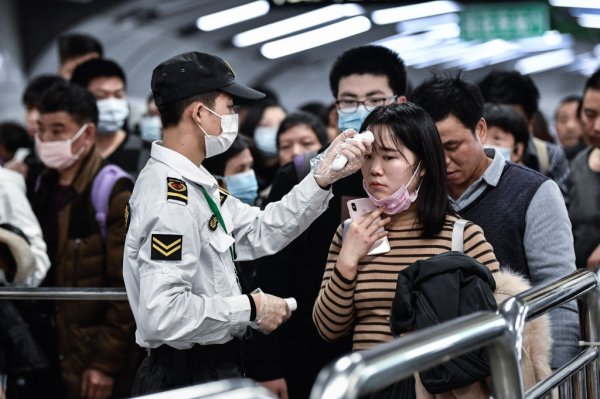