(Not the actual couple)
Emilio Labrador / Flickr
By Kyle Chayka

A man in China’s Hubei province is reportedly suing his ex-girlfriend for $6,450—all because she insisted on bringing her stuffed animal, Snoopy, on dates throughout their four-year relationship. According to a report from China’s Global Post, Snoopy was third-wheeling it all over the place: the boyfriend had to buy extra food and tickets to the movies just for the stuffed animal.

Eventually, the boyfriend snapped, throwing Snoopy in anger after refusing to take it (him, apparently) into the bathroom. He broke up with his girlfriend, but then decided the “mental anguish” caused by Snoopy deserved compensation.

This animal love triangle might be strange, but we’re guessing that the girlfriend had a not-so-secret case of plushophilia, a fetish for stuffed animals that’s well-documented on the Internet.

Plushophilia is different than being a furry—less than one percent of furries (anthropomorphized animal fetishists) are plushophiles, according to one study. The gentleman from Hubei probably would have been equally put off by either one, however. 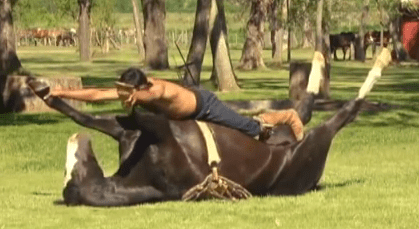 Now There's Yoga for Horses
Next Up: Editor's Pick