Movies about jobs and the toll they can take on the human psyche are a tough sell. How do you dramatize fatigue, anxiety and repressed ennui without boring an audience to bits? The best approach is to use an actor’s face to carry the burden, which is what Kitty Green does in her quietly harrowing debut feature The Assistant, set during one interminably stressful workday.

Julia Garner plays Jane, a recent college grad working an entry-level job at a hip film-production outfit, which evokes an earlier iteration of the Weinstein Co. The job comes with perks: in the morning, there’s a car to pick her up from her nondescript apartment building in Queens. But it shows up before dawn, and, bundled into a caterpillar-like scarf to fend off the cold, she grabs a few more minutes of much needed sleep in the back seat. Jane has to be the first in the office, to turn on the lights, to make the coffee, to tidy up around her boss’s desk. She finds a woman’s earring in his lair and places it discreetly in her desk drawer; it’s part of her job to look away from his questionable extracurricular activities.

Jane hopes to become a film producer, but for now, she’s on the ladder’s bottom rung. Two slightly more experienced colleagues (John Orsini and Noah Robbins) show occasional kindness, but they also radiate a malicious hope that she’ll fail, listening in voyeuristically as the bully-mogul boss berates her for something that isn’t her fault. (He’s never seen, though we hear his bark through the phone.) Later, after a different blowup, he’ll semi-apologize to her with an email that reeks of patronizing, and sinister, control: “I’m tough on you because I’m gonna make you great.”

There’s a #MeToo component of The Assistant, but that’s not the film’s focus. Instead, Green–director of the 2017 documentary Casting JonBenet–captures the jagged texture of the lives of overworked millennials and Gen-Zers, though anybody who has ever been pushed to the point of exhaustion in an entry-level gig will relate. For so many young people, women in particular, workplace exploitation is granular–you don’t have to be the victim of outright sexual assault or threats to be affected by a higher-up’s bad behavior. Garner is perfectly cast, a pixie of steel. You can see by the stern set of Jane’s lips and by the way, time and again, she just barely represses an eye roll, that she’s tough enough to handle all of this–and yet she knows she shouldn’t have to.

At the end of a workday, stressed-out people often crave a drink or a smoke. Jane instead turns to carbs and sugar, in the form of a giant deli muffin that she can’t even finish. It’s a tiny flourish that cracks your heart open. When you’re young, everyone tells you that you have to work hard to get ahead. But how hard is too hard, and what’s unreasonable? The Assistant captures that shaky sliver of youth when you don’t yet know the answer to those questions. 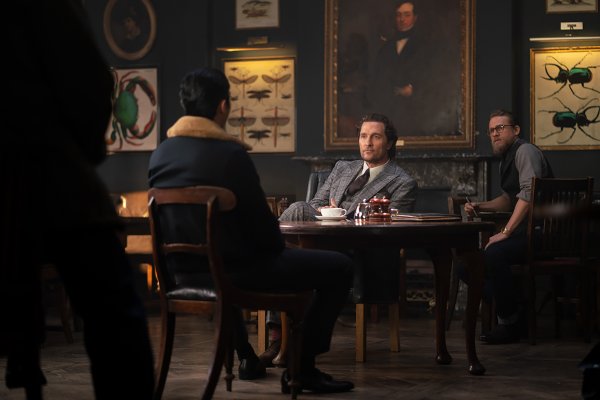 The Gentlemen Is Not Nearly as Classy as Advertised
Next Up: Editor's Pick