The two men who spent the night in jail in 1998 on sodomy charges, John Lawrence, center, and Tyron Garner, right, sit with their attorney Lee Taft, left, during a press conference in Houston on June 26, 2003.
Michael Stravato—AP
Ideas
By Marlon James
James is the author of the New York Times-bestseller Black Leopard, Red Wolf, which was a finalist for the National Book Award for fiction in 2019. His novel A Brief History of Seven Killings won the 2015 Man Booker Prize.

This is not an essay about lynching. But the curious landmark case of Lawrence v. Texas made me think about it all the same. And not just because it was inflamed by two different kinds of panic over a specific fear in the unpoliced white imagination, what writer Greg Tate once called “the black sex machine gone berserk.” Quick recap: When Robert Eubanks, a white man of Harris, Texas, called the police on his friend John Geddes Lawrence Jr., a white, gay fifty five- year-old medical technologist, and mutual friend Tyron Garner (black), it was because he noticed that Lawrence and his on‑and-off again lover had hit it off way too well, and while he went out to get soda, he jealously surmised that they were getting it on. Many white people profess ignorance at how racism actually affects black people yet demonstrate full awareness of how to use it for the most damage. Eubanks called the police, counting on their hair-trigger reaction, yet more likely discounting how bloody these encounters usually play out.

But Eubanks, in an action that would go viral with white women twenty years later, called the police on a black person having too much fun. And like quite a few white men from the good old South, Eubanks knew exactly what to say to get his revenge. He called the police to report not a sex but a gun crime, specifically “a black male going crazy with a gun” at Lawrence’s apartment. The recklessness of Eubanks’s imagination remains stunning, but the black gun in the white mind has often been inseparable from the black cock. As for hard black cocks, the police claimed to have seen that and more when they stumbled on Lawrence and Garner in flagrante delicto. If nothing else, Eubanks was as excellent a reader of racial assumptions as he was of sexual chemistry. Garner was two things in the Middle American fancy wrapped into one: big black gun as phallic symbol and a big black penis as gun substitute. It’s remarkable how a case that would go on to make great strides for sexual orientation started out with white America’s warped perceptions about race. This was a case that could have gone to the Supreme Court for very different reasons had the police chosen to act differently—meaning had they assumed that Garner was the kind of threat Eubanks claimed he was. But whatever it was the police saw those two men doing, both were arrested and charged with a misdemeanor under Texas’s anti-sodomy law.

Slippery-slope theory is a common trope of conservative thinkers, as is conflation, but the opinion was nonetheless curious given that in states like Texas, acts of bestiality were actually legal. Texas made it illegal only in 2017 on condition that lines such as “act involving contact between the person’s mouth or genitals and the anus or genitals of an animal or fowl” were struck from the law. As for lynching, that became illegal only in 2019. I make this wide digression to point out that whether it was overturning an unjust illegality (consensual sex between men), or outlawing a long-accepted legality (lynching black men and women, sex with a donkey), there’s a sense in America that justice too often comes too late.

You don’t have to be gay to see the ripple effect of Lawrence. For one it overturned Bowers v. Hardwick (1986), a Supreme Court decision that even a few members of the Court knew should never have happened: it upheld a Georgia statute that sexual privacy did not deserve constitutional protection. Intimate sexual activity was one of our freedoms after all; at least it was to benefit from due process. Lawrence v. Texas paved the way for gay marriage and, with it, curiously enough, a wave of gay men who would have disapproved of both Lawrence and Garner.

But the details of the actual case remain fascinating because it shows two clashing visions of America finally going to war, both clutching the Fourteenth Amendment like a Bible: those demanding that freedom for all should mean all, and those demanding that traditional values must mean that what many consider freedom isn’t freedom at all but leeway to deviate from morality. There are more things you should know. Antonin Scalia’s dissent is fascinating in its frightfulness, especially when you consider that Lawrence was not that long ago. He found this judgment in line with the infamous homosexual agenda, an abstract concept that seemed sprung from a fake document, like a Protocols of the Elders of faggotry.

Except in this case Scalia brandished a working definition. He laid it out as “the agenda promoted by some homosexual activists directed at eliminating the moral opprobrium that has traditionally attached to homosexual conduct. The Court has taken sides in the culture war, departing from its role of assuring, as neutral observer, that the democratic rules of engagement are observed.” He did not stop there but went on to conclude in a way similar to long-standing opponents of civil rights legislation that this was a turn against the way the American people chose to evolve and that the Court showed it was “impatient of democratic change.” This is important because even in the wake of gay marriage, and homosexuals voting for Trump, even world-famous gay stars are still being bashed and beaten, and many other world-famous people have been inching back to that time when they could still get away with being publicly homophobic.

The Court’s decision was more in line with a liberal version of where America could possibly go, but I wonder if Scalia’s remarks aren’t a more accurate capture of where America might still be now. We (meaning us liberals) like to think that progressive legislation eventually produces progressive change of thought, but the Trump years have loudly and violently proven this not to be the case. We also like to ignore that progressive triumphs nearly always come with violent right-wing backlash, scrambling to conclude that the Manson murders, for example, were senseless when they were simply racist. Manson wasn’t trying to end the sixties’ dream; he was trying to get black people framed for the murder so that it would start “Helter-Skelter,” a race war.

Racism and anti-Semitism came unhooded in 2017 despite decades of civil rights. Speaking of civil rights, the Supreme Court rolled back on protections the very same week it approved gay marriage. Roe v. Wade is constantly under siege, this time to wither it from the branches, not the root. Bakers are taking to the courts for the right to not bake cakes for same-sex weddings, funeral directors are refusing gay corpses, and for an administration that came in with the help of so many homo-millions, the rollback against protections of LGBQ and, in particular, trans people has been alarming.

I migrated to the United States in fall 2007. Some people flee to, some run from, some do both. I left Jamaica to save my life, but contrary to the connotation immediately raised by coupling “Jamaica” and “gay” in the same sentence, I was only fleeing myself—or, rather, a version of myself intent on killing me. This version of myself couldn’t imagine a place where I could hold another man’s hand for more than four seconds, could never even imagine admitting to being gay in the first place.

The previous sentence is not true. I imagined it all the time. I lived in the fantasy of it, delaying as long as I could the reality of it never happening. Other times I disconnected from it completely and imagined two other men living out wildly romantic lives, usually two handsome white men, as if my imagination had turned into a drama on the WB network. No gay person running to America fools himself into expecting a country decked out in rainbow colors or that you can’t be gay-bashed in New York City. But we run in the hope that we will not be excluded from life, liberty, and the pursuit of happiness because we flex queer. Note that those three words are all abstractions, and gay Jamaicans younger than me are far more interested in pursuing them in their own country. And lawmakers are constantly chafing against Lawrence v. Texas, playing with it, trying to corrupt it, and using it as a basis to claim that it restricts the very Fourteenth Amendment that made it possible. Scalia himself asserted that the same rationale that overturned Bowers v. Hardwick could be used to send women back in the closet with the coat hanger.

But what drew me to these United States was the idea that simply being myself was protected by law, even if at the time I didn’t know what that self was. This is a crucial thing for those of us who never had a chance to grow into ourselves in our home countries. We migrate to America to simply become. And while Lawrence v. Texas arrived far too late for far too many, for people like me, it came just in time.

From FIGHT OF THE CENTURY, edited by Michael Chabon and Ayelet Waldman. Reprinted by permission of Avid Reader Press, an Imprint of Simon & Schuster, Inc. 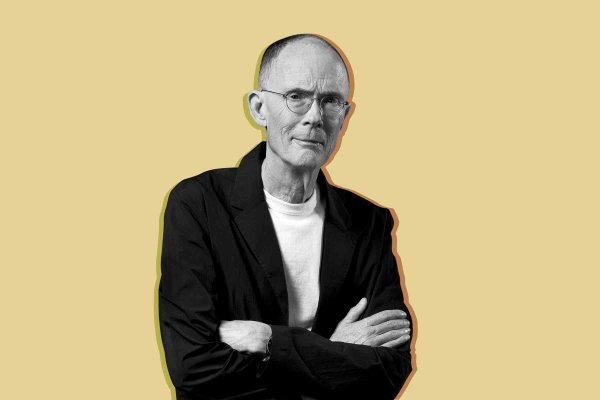 Sci-Fi Novelist William Gibson on the Invention of the Term "Cyberspace" and How AI Could be Truly Intelligent
Next Up: Editor's Pick