The U.S.S. Miller Will Be the Navy's First Aircraft Carrier Named for an African-American

(Jan. 17, 2020) In this file photo taken May 27, 1942, Mess Attendant 2nd Class Doris Miller stands at attention after being awarded the Navy Cross medal for for his actions aboard the battleship USS West Virginia (BB-48) during the Dec. 7, 1941 Japanese attack on Pearl Harbor. The medal was presented to Miller by Adm. Chester Nimitz aboard the aircraft carrier USS Enterprise (CV-6) during a ceremony in Pearl Harbor, Hawaii.
U.S. Navy
By Josiah Bates

Miller is noted for his heroics during the 1941 attack on Pearl Harbor, when he took control of a machine gun on the U.S.S. West Virginia and fired back at Japanese planes. He later received the Navy Cross for valor, making him the first African-American to receive the honor.

The U.S.S Miller, a destroyer escort, was previously named after him. That vessel was decommissioned in 1991.

“Doris Miller stood for everything that is good about our nation, and his story deserves to be remembered and repeated wherever our people continue the watch today,” Acting Secretary of the Navy Thomas B. Modly said in a press statement.

While gathering laundry on the U.S.S. West Virginia the day of the Pearl Harbor attack, Miller heard the alarm on his ship sound. He went to his battlestation, but it was damaged by enemy fire. After attempting to help a mortally wounded commanding officer, Miller manned a .50 caliber anti-aircraft machine gun and fired at the Japanese planes until he ran out of ammunition. He then helped other injured sailors evacuate.

“I think that Doris Miller is an American hero simply because of what he represents as a young man going beyond the call of what’s expected,” Doreen Ravenscroft, a team leader for the Doris Miller Memorial, told the Associated Press.

Ravenscroft also told the AP that African-American men in the Navy were not allowed to man a gun in 1941.

“Without him really knowing, he actually was a part of the Civil Rights movement because he changed the thinking in the Navy,” Ravenscroft added.

Miller died aboard the U.S.S. Liscome Bay when it was hit by a Japanese torpedo two years after Pearl Harbor. 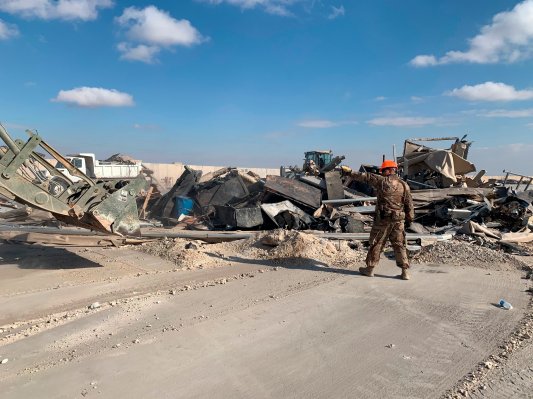 11 U.S. Service Members Were Treated for Concussion Symptoms After Iranian Missile Attack
Next Up: Editor's Pick