The 5 Best Songs of the Week, from Halsey to BTS

It was a busy end of the week in the music world: Eminem surprise-dropped a 20-track album, and the head of the Recording Academy was removed from her post just 10 days out from the 2020 Grammy Awards. This week, we’re paying attention to Mac Miller‘s thoughtful posthumous album Circles, Halsey’s Manic, BTS’ first single off their February album, Soccer Mommy’s “Circle the Drain” and King Krule’s “(Don’t Let the Dragon) Draag On.”

There are two ways to listen to K-pop: passively consume the music on its surface value — which can be very fun, to be sure — or dig deep into the universe that the artists and their teams have crafted, often a maze of connected narratives that blend visuals with song lyrics and sound. BTS rewards the latter kind of attention in spades; their focus on detail is one part of the group’s ability to amass such a passionate following. “Black Swan,” the first single off of the 7-member group’s upcoming Map of the Soul: 7 project, comes to us in two forms. One is an ethereal R&B song. The other is a music video featuring a group of coed dancers from MN Dance Company, in lieu of the group’s members themselves, performing contemporary choreography over an instrumental-first version of the song. It kicks off with an epigraph from the dancer and choreographer Martha Graham: “A dancer dies twice — once when they stop dancing, and this first death is the more painful.” BTS’ desire in this phase to express their passion for their art and its impact on their lives has never been more evident. One of the short English phrases that pops up in the lyrics is particularly apt: “Do you hear me?” And we do.

Since her precocious 2015 debut with the moody Badlands, Halsey has made it clear she’s comfortable trying out new styles every time she releases new music. Luckily for her, she’s not just a pop star; rock sounds good on her, too. “3am,” off her bold new album Manic, proves it. She airs out her self-destructive tendencies with clear-eyed angst. “I know it’s complicated / ‘Cause everyone that I’ve dated says they hate it,” she sings. It may seem to echo the hit single from Avril Lavigne, but it’s a bit different here: this time, it’s the singer herself admitting that she might be the problem.

It’s hard to listen to something like Mac Miller’s beautiful “Hand Me Downs,” off his posthumous album, and not feel both profoundly sad for the loss and appreciative for what he left behind. His songs tenderly bridge tough subjects with warm, satisfying melody. It’s a gift in which his listeners may find some solace.

Don’t be fooled by her youthful-sounding voice and melodies that lean toward cheerful, sun-soaked pop: budding indie-rock star Soccer Mommy does not offer a picture of joy and optimism on “Circle the Drain,” off her upcoming sophomore album Color Theory. This is what might happen if Sheryl Crow went dark; acoustic Nashville rock that, when you pay closer attention, turns out to be just short of nihilistic. “Hey, I’ve been falling apart these days,” she sings, breathy and direct. It’s the same deadpan simplicity that nabbed her attention with her first project, and it brings great promise for what’s on the way.

King Krule is more a mood than anything, a feeling of oozing jazz. (It’s apt, then, that his 2017 project was titled The Ooz.) Archy Marshall has a knack for finding something gooey and velvety in sonic darkness. The often camera-shy British artist finds new levels of blurry, helpless sadness in “”(Don’t Let the Dragon) Draag On:” “Walls get taller / Self-medicate / ‘And how did you get this low?’ / That’s what the illness spoke.” This is the start of an album on the way, and it sounds like King Krule is still very much battling his demons. 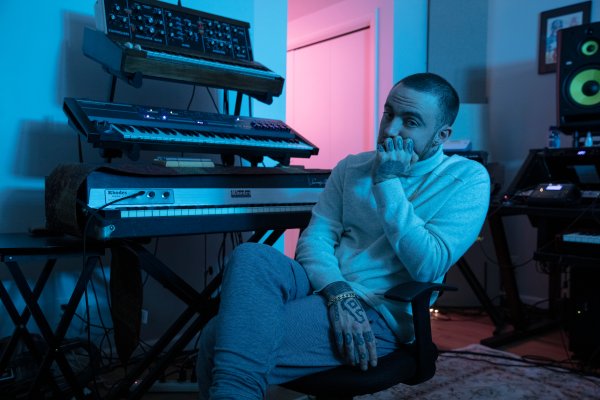 Mac Miller's Posthumous Album Circles Is a Heartbreaking Plea For Inner Peace
Next Up: Editor's Pick