The Complicated Truth About What U.S. Citizenship Means Today

Illustration by Mark Smith for TIME
Ideas
By Laila Lalami
Lalami is the author of four novels, including The Other Americans, a finalist for the National Book Award. Her new book, Conditional Citizens: On Belonging in America, will be published in April 2020

The first time I saw the Statue of Liberty was 25 years ago, from a noisy ferry that brought me and hundreds of other eager tourists across New York Harbor. Back then I was a foreign student, in Manhattan for three days to attend an academic conference on linguistics. I had only one afternoon to devote to sightseeing, and faced with the choice of which landmark to visit, I settled immediately on Ellis Island. The site loomed large in my imagination, likely because of its romantic portrayal in the American movies I had grown up watching. I ambled through the stately inspection room, where original chandeliers cast their pale light, sat for a few minutes on the wooden benches, then went inside the exhibit rooms, filled with artifacts documenting the arrival of immigrants.

I still remember the jolt of surprise I felt when I came across a portrait of three Moroccan men and a little boy, all clad in national dress–cloak, djellaba, cross-body bag, leather slippers. It was a trace of a history I didn’t know existed. After the surprise wore off, I began to wonder about their names, their pasts, their families, their reasons for emigrating. Years later, researching this picture online, I discovered that the photographer, an employee of the Executive Division of Immigration, had scribbled “Arab jugglers” on the back of the print. These were performers, then, seeking fame or fortune here. They forged new identities and became Americans, just like the other 12 million immigrants and refugees who passed through Ellis Island from 1882 to 1954. Or at least, that is how the story goes: America was formed from huddled masses yearning to breathe free.

As I walked around the exhibit rooms at the Ellis Island immigration museum, it never occurred to me that someday I would become an immigrant too, and eventually a citizen. At the time, my goal had been to complete a graduate degree in linguistics and return to Morocco. But my life took an unexpected turn when I met and fell in love with an American. I said yes to him, and yes to staying here. Years passed, during which I learned more about the country I now called home: its charms and foibles, its culture and history, its claims to being a “nation of immigrants.” And I came to understand that, like any origin story, this one leaves out inconvenient details.

The boundaries of Americanness, which seem so elastic in the myth of a “nation of immigrants,” have in fact been very rigid–and always, always contested. At the founding of the United States, American citizenship was available exclusively to “free white persons.” It took decades of struggle, and a bloody civil war, before citizenship was extended to formerly enslaved people and their descendants. Indigenous people, who were members of sovereign nations, did not have full access to citizenship until 1924. And for much of this country’s history, a slew of race-based immigration laws, like the Chinese Exclusion Act, prevented most immigrants from outside Western Europe from coming to the U.S. or claiming U.S. citizenship.

It is tempting to think that this ugly history is behind us. Yet even a glance at current headlines makes it clear how deeply entrenched white-supremacist ideas about Americanness remain. The Trump Administration announced in 2019 that it would cut the number of refugees the U.S. will resettle in 2020 to no more than 18,000, the lowest number since the program was created 40 years ago. These refugees come principally from Asia, Africa and Latin America, which is to say they often come from countries the President has frequently disparaged. Ken Cuccinelli, the acting head of U.S. Citizenship and Immigration Services, has long been an opponent of birthright citizenship and last fall told reporters that he doesn’t believe a constitutional amendment would be needed to end it. And Stephen Miller, the White House aide who has long echoed white-nationalist talking points and who is widely credited with being the architect of the Muslim ban, has pushed for sweeping changes to immigration laws that would favor people who speak English.

There are also rhetorical clues from this Administration and its supporters about who gets to be a “real” American. Last summer, Donald Trump called on Congresswomen Alexandria Ocasio-Cortez, Ilhan Omar, Ayanna Pressley and Rashida Tlaib to “go back” to the “crime-infested places” from which they came. (All but Omar were born in the U.S.) More recently, conservative cable hosts like Laura Ingraham and Brian Kilmeade insinuated that Alexander Vindman–an official at the National Security Council who testified that the President had asked the leader of Ukraine to investigate a political rival in exchange for military aid–might not be entirely loyal to the U.S. because he was an immigrant. It didn’t matter that Vindman was an active-duty officer in the U.S. Army; his allegiance was called into question.

Being American isn’t just a state of being, whether native or acquired. It’s a relationship between an individual and the nation-state. To be an American means, among other things, to have the right to vote in state and federal elections, to have protection from unreasonable searches, to be free to speak or worship or assemble without government interference. In the past, these rights, protections and liberties were not granted equally to all, and they still aren’t today. For instance, millions of formerly incarcerated people in states like Alabama, Kentucky, Florida and Mississippi have lost the right to vote and are therefore shut out of the democratic process. This has vastly disproportionate effects on black men. By comparison, Vermont and Maine, the two whitest states in the union, allow both incarcerated and formerly incarcerated people to vote. Citizenship is supposed to be an equalizer, yet in many ways it still functions as a tiered system that mirrors past racial hierarchies.

Four years ago, while I was visiting New York for a literary event, I took my daughter and niece to see the Statue of Liberty and Ellis Island. It was a cloudy day in June, but the air was thick with humid heat. Both girls were excited about seeing the national landmarks; both undertook ancestry searches at the interactive exhibits. Although neither site was new to me any longer, I felt just as moved as the first time I’d seen them. There is something deeply seductive about these symbols. Even with the awareness of America’s history of colonial expansion and white supremacy, the promise of life, liberty and the pursuit of happiness is still a potent lure.

I live with this contradiction every day, with the knowledge that the bleak past and the better future meet in the present moment. Citizenship is both an idea and an ideal, the journey from one to the other a measure of the nation’s progress. I wish this journey could be taken in a giant leap, even as I fear it will be walked slowly, fearfully, and with many steps back along the way. Yet I keep the faith. Perhaps it’s because I’m a novelist, whose work involves constant use of the imagination. Or perhaps it’s because I’m an immigrant, whose vantage point grants the privilege to look at the country from the inside and the outside. Either way, I know that promise is the best catalyst for progress. 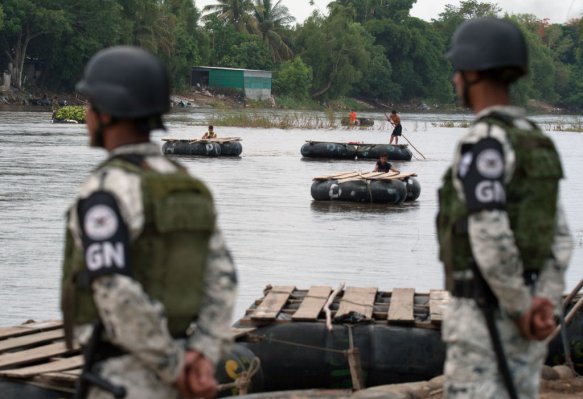 Border Apprehensions Decline For 7th Month In a Row
Next Up: Editor's Pick