‘As a journalist, I try to never have a final-final view of anything.’—Steve Inskeep, co-host of NPR’s Morning Edition and author of Imperfect Union
Stephen Voss for TIME
By Karl Vick

If he is in bed by 9 p.m., Steve Inskeep can get six hours of sleep before the alarm. He’s due at NPR’s Washington, D.C., headquarters at 4 a.m. for the live broadcast of Morning Edition that starts an hour later. It means the most intense part of his workday is over when a lot of people are just heading to the office around 7:30, and he passes the rest of the morning preparing for the next day’s broadcast. “But the afternoons are sometimes mine,” Inskeep says, over a clamshell of scrambled eggs and bacon in the NPR cafeteria. “Sometimes they’re not. Someone will say, ‘The Senator will talk to you at 4 p.m.’ And so I’m just going to have a long day, and it’s fine. But other days I can escape at noon, and I may go over to the Library of Congress.”

It’s where he researches his books, works of history that illuminate both the past and the present visible in it. The newest, published on Jan. 14, is Imperfect Union: How Jessie and John Frémont Mapped the West, Invented Celebrity, and Helped Cause the Civil War. It relates the life story of the man who popularized the settlement of the Great Plains and Rocky Mountains, and, kind of by accident, added the Pacific coast to the U.S. It is no less the story of the woman who found a rare agency of her own in ensuring that her husband’s name was widely known. It was Frémont who named the Golden Gate, as the proscenium to trade with China. The Republican Party’s first-ever nominee for President, he was so famous in his day that a magazine declared him one of the three most important figures since Jesus Christ.

“But it’s hard to figure out why,” Inskeep says, of the figure who today lives on mostly in the names of cities and streets that date to the era of his renown. “And I began to realize that for him, fame was the entire point. He went and did these explorations of the West, but they weren’t really about discovering new things, for the most part. They were about mapping trails that were already there and making it all explainable to the public and writing these beautiful lyrical reports that would become best-selling books or excerpted in newspapers so that people would be enticed to settle the West. To move west. Publicity was the point. And in the course of making the West more appealing, he made himself more famous.”

This was the 1850s, immigrants were falling out of favor with American-borns, and race, in the form of slavery, was the irreducible foundation for all political discourse. “The political arguments then feel like the political arguments now,” Inskeep notes. “The terminology has changed a little bit. The human emotions that underlie the politics are very similar. What’s happening here is America is establishing its borders and arguing over its identity: Who gets to be American and why?”

On the page, Inskeep’s voice sounds like it does on the radio, or wherever it’s heard out in the real world. “I will get into a taxi and just say the address and hear, ‘How are you doing, Mr. Inskeep?'” At a kids’ birthday party, another parent once told him, “You have an interesting voice. Have you ever thought about going into radio?”

In many ways, it’s the voice of reason. Inskeep has a way of approaching a topic that projects both curiosity and openness to new information, which is another way of saying he models responsible civic behavior. He does this so well that during live interviews, Inskeep can get away with quick asides to correct something incorrect that a guest has just asserted, and then just continue the interview. It’s particularly impressive at National Public Radio, a world-class news organization sometimes confused with its stereotyped listener: a liberal with a furrowed brow and a canvas tote. The reality, especially in remote parts of the country, is far more nuanced, and Inskeep holds no truck with the notion that the appetite for thoughtful and thorough reporting is governed by political inclination.

“I think, also, the whole thing about who is liberal and who is conservative, who is biased, is a way of not talking about the facts of the story at hand,” he adds. “It’s a way of telling people, ‘Don’t think about the facts. Don’t listen to this person because I say they shouldn’t be listened to.’ The reality is that everybody who is politically engaged in America has some kind of opinion about something. As a journalist, I try to never have a final-final view of anything. Almost everybody you talk to has an opinion, which doesn’t mean they’re invalid. The question is do they make an argument that makes sense? Do they show their work? Are there facts to support what they’re saying? And that’s what we should actually be looking at, regardless of the political background of whoever we’re listening to. Do they make any sense? Do they prove their case? Do they connect dots that obviously don’t connect?”

NPR headquarters stands a few blocks north of the U.S. Capitol, in what had been a warehouse for the local telephone company. At 6 a.m., the lobby is vacant, but upstairs, the vast central newsroom is awake and alert. In the control room, halfway through the morning show, Inskeep is in the chair on the right, co-host Noel King a few feet away on the left. He addresses the microphone like it was a person, one elbow propped on the arm of his chair, the other arm gesturing as he speaks.

Inskeep, 51, is tall and has the looks and presence to be on television, which he sometimes is, doing interviews in the field with regular people on a feature called Three Meals for CBS This Morning. But the roughly 14 million people who tune in to NPR’s Morning Edition each week is more than any TV news show draws on a given night. And as a news medium, public radio is uncommonly healthy. NPR has benefited from the surge in interest in the news since the 2016 election. And at the local level, new funding has public stations hiring.

“There might have been two reporters, and now they have 32. Like, a ridiculous increase,” Inskeep says. “That’s still nothing compared to the loss of the local newspaper that had 350 reporters and now has 35. But if you listen to WAMU here in Washington, you will hear serious, interesting, national-quality local-news coverage of things that matter. And people respond to that as well.”

Not everyone, of course. On my way to see Inskeep, the Uber driver asked what I’d like to hear. I said NPR, but he heard MPR and his Apple CarPlay brought up the song by Pop Smoke. National Public Radio produced a song by Sledding With Tigers. The world of news is not everyone’s.

It’s one of the reasons Inskeep writes books. Maybe it was mostly coincidence that his previous one, Jacksonland, published in 2015, centered on the populist President whom Donald Trump would declare his favorite upon taking office two years later. But it’s no less likely that from the place he has made in the news cycle, Inskeep was responding to deep tones that sound through generations.

“History is often on my mind, and the long view of things is often on my mind,” he says. “Probably the vast majority of things that get labeled breaking news are not actually things you need to know, and you won’t even remember them or need to remember them two hours from now. And I would rather spend the time that I have with people on the radio talking about things that I think they will need to know, that will be useful to them over time.” 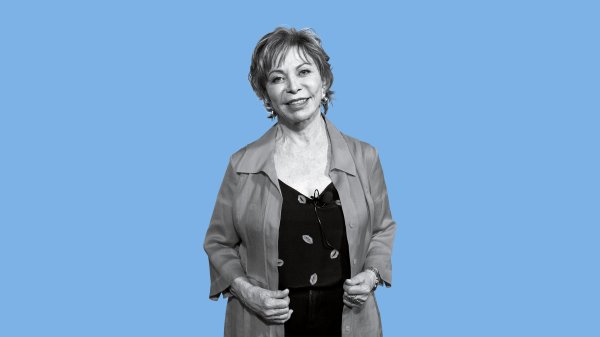 'I've Seen Everything.' Author Isabel Allende on Why She Doesn't Fear Death and the Inspiration for Her New Novel
Next Up: Editor's Pick