At least 44 people at multiple elementary schools, including at least 20 children, were injured after an aircraft apparently dumped jet fuel before making an emergency landing at Los Angeles International Airport, officials said.

The majority of the reported injuries occurred after a substance apparently landed around Park Avenue Elementary School in Cudahy, a city in Los Angeles County, shortly before 12 p.m. local time, the L.A. County Fire Department said. At least 20 children and 11 adults received minor injuries. Hazmat units deployed to the scene tested the substance and determined that it was jet fuel.

All of the reported injuries were minor, and no one was transported to the hospital, the L.A. County Fire Department said.

“Students and staff were on the playground at the time and may have been sprayed by fuel or inhaled fumes,” a Los Angeles Unified School District spokesperson said in a statement. “Schools immediately called paramedics, who are on the scene and are treating anyone who is complaining of skin irritation or breathing problems.”

The aircraft, a Delta 777-200 according to flight-tracking service FlightAware, experienced an “engine issue requiring the aircraft to return quickly to LAX,” a Delta spokesperson said. “The aircraft landed safely after a release of fuel, which was required as part of normal procedure to reach a safe landing weight.”

The flight, Delta Air Lines Flight 89, had been en route from Los Angeles to Shanghai.

The Federal Aviation Administration says it’s “thoroughly investigating the circumstances behind this incident.”

Dumping fuel is a rare but not unprecedented practice. An airliner fully fueled for a transpacific flight would likely exceed its maximum landing weight, meaning it isn’t safe to land with full fuel tanks. However, pilots are encouraged not to dump fuel over populated areas, and to dump fuel at a high enough altitude that it dissipates before reaching the ground.

Heath Montgomery, a spokesperson for Los Angeles International Airport, said that the flight crew requested an emergency landing after experiencing a “mechanical issue” and landed back at the airport at 11:47 a.m., about 15 minutes after takeoff.

The Los Angeles County Fire Department said that 30 emergency units and 65 personnel had arrived at Park Avenue Elementary School and conducted emergency care on scene. As of 1:11 p.m., none of those injured had been hospitalized.

The school district said that educators visited classrooms to ensure that all the children and staff members are safe.

The Los Angeles County Fire Department said on Twitter that there are no evacuation orders in place for the area. 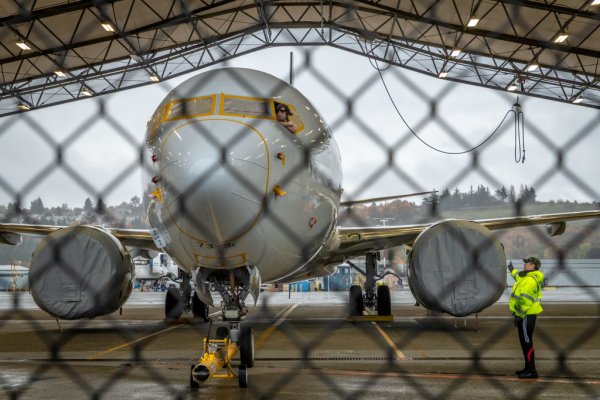 'This Airplane Is Designed by Clowns.' Internal Boeing Messages Describe Efforts to Dodge FAA Scrutiny of MAX
Next Up: Editor's Pick