Photo-Illustration by Matt Chase for TIME
By Mandy Oaklander

Madalyn Parker had been at her first job only a few months when the depression and anxiety set in. She had beaten back both in college, where she became so depressed that she stopped eating and going to classes. It nearly prevented her from graduating.

She kept her history to herself when she accepted a job as a web developer at the small software company Olark in 2014. But as the youngest (and only female) engineer, “I started getting panic attacks about work and being really, really stressed about not getting enough done,” says Parker, now 29. She went in to her Ann Arbor, Mich., office later and later, then less and less. Her performance slipped. Parker pulled aside the chief technology officer at a conference. “‘I don’t think it’s going to go away, so I feel like I should be open about it at work,’” she remembers telling him, and bracing for the worst. “Instead, his response was, ‘I wonder who else feels like this.’”

Parker had stumbled into a new kind of workplace—one as attuned to mental health as the people working in it, especially the young people. The Olark executive she’d approached, who is now 34 and the COO, ended up doing a presentation with her to colleagues, sharing his experience with burnout. The company’s unlimited-vacation policy allowed Parker to take all the sick leave she needed, and she worked from home more. “I’m taking today and tomorrow to focus on my mental health,” her out-of-office message read one day in 2017. “Hopefully I’ll be back next week refreshed and back to 100%.”

The CEO replied. “I just wanted to personally thank you for sending emails like this,” he wrote. “Every time you do, I use it as a reminder of the importance of using sick days for mental health—I can’t believe this is not standard practice at all organizations.” Parker posted the exchange to Twitter, and more than 43,000 people have liked it, including some millennials asking about job openings. Though she’s moved on to a different company, it still gets retweeted every day.

Mental illness is rising in every country in the world. Depression is so common and debilitating that it’s one of the leading causes of disability worldwide and, coupled with anxiety, costs the global economy about $1 trillion a year in lost productivity, according to the World Health Organization. Among millennials (who are ages 24 to 39 in 2020), depression is the fastest-growing health condition, the Blue Cross Blue Shield Association recently found. And it doesn’t stay home. In a forthcoming survey from the charity Mind, of 31,100 U.K. employees who reported ever having a mental-health issue, 52% also said they had experienced poor mental health at their current workplace.

Employees are less and less likely to hide it at their jobs. A 2019 poll by the American Psychiatric Association found 62% of people ages 20 to 37 feel comfortable discussing their mental health at work, compared with about half as many people ages 54 to 72. And when they don’t feel supported by their jobs, many leave. Half of millennials—and 75% of Gen Z-ers, who in 2020 are ages 23 and under—said they had voluntarily or involuntarily left a job in part because of mental-health reasons, according to a 2019 survey of 1,500 U.S. workers by Mind Share Partners, a nonprofit that provides mental-health training for corporations.

In the competition for valued employees, companies now see mental-health fluency as crucial. Beyond baseline coverage, global firms like Bank of America, KKR, Booz Allen Hamilton and Unilever are offering innovative solutions, from training employees to spot signs of depression in one another to fostering a less hierarchical vibe.

“Workplace culture has really changed from the baby-boomer generation,” says Kelly Greenwood, CEO of Mind Share Partners, which she founded after a leave of absence from a past job because of anxiety. “You’re supposed to be ‘on’ 24/7 and responsive to your company in a way that never existed in previous generations. The experience of being in a junior role now is much different from what it used to be.” Many young workers are also shouldering education debt as well as higher living costs. At the same time, discussing mental health grows more normalized. “Gen Z or millennials have often grown up going to therapy or [being] on medication, and increasingly, there are more and more mental-health clubs in high schools and colleges,” Greenwood says. “There’s a huge culture clash that happens when these folks graduate college and all of a sudden show up in a workplace where mental health is a taboo topic.”

When Michaela Chai started going to therapy on campus at University of California, Berkeley, she’d first turn off the location tracker on her phone. She didn’t want her friends who used the Find My Friends app to know where she was. “Growing up in an Asian family, we didn’t really acknowledge invisible illnesses,” says Chai, 22. “I was so scared about being found out.” She withdrew from her friends and thought about dropping out of college. But after being diagnosed with depression and starting medication, she felt better, eventually becoming something of a mental-health ambassador on campus.

Chai will soon bring that spirit to the workplace. If her future company doesn’t have a mental-health support group for employees, she plans to start one. And she wants to be transparent with her managers. “If I were to have my depression come back, I would definitely want to be open about it, rather than try to hide it,” she says. “It’s affected my academic performance, and I’m sure it would affect my work performance.”

The new rallying cry for companies trying to appeal to Chai’s generation is to bring your whole self to work. They’re starting at the top. When Paul Greenberg was the CEO of CollegeHumor, a comedy website, in 2012, he was having strong suicidal thoughts. He had struggled with depression all his life and had hidden it from everyone at work. Electroconvulsive therapy finally helped. In 2018, after starting a digital-video firm called Butter Works, he wrote about his experience in the Hollywood Reporter to help people with mental illness feel less alone.

“I wanted to go public with this,” he says. “It’s too important. This is a personal matter for me, but it’s also a work matter for our employees and our company, and this will help us all succeed better.”

As CEO of Butter Works, Greenberg promotes a culture where employees can put their mental health first. He bought a pricey insurance plan that covers out-of-network providers, which many mental-health professionals are. He tells employees and clients that he has a therapy appointment or a ketamine treatment in the same way he’d mention a lunch meeting. “I’m trying to create an atmosphere where people feel this is totally destigmatized, in the same appropriate way you’d talk about anything personal at work,” he says. Since he revealed his mental-health issues, younger employees have confided in him about their own, he says. “As soon as you normalize it, other people do too.”

At larger organizations, even the most supportive culture rings hollow if managers don’t telegraph it. The investment firm KKR will soon issue a handbook to managers that spells out, for the first time, how they should support the mental health of their employees. “It’s a starting point for us to remind managers that it’s really critical for them to model these behaviors that support a culture of health at the firm, where ultimately employees feel empowered to make proactive decisions around how they manage their own health and well-being without feeling like they’re going to be penalized in some way,” says Christopher Kim, global head of benefits at KKR, “whether that means going to see a doctor, getting a mammogram, spending time with a therapist, going to the gym or taking a run in the middle of the day.”

In 2019, Bank of America launched a 15-month manager-training program focused on resiliency and stress management, as well as signs of anxiety or stress to watch for in their direct reports. “We’re not trying to turn our managers into psychiatrists and psychologists and clinical professionals,” says Chris Fabro, global head of compensation and benefits for the bank. “But we have a responsibility for the wellness of our teammates, and as a manager, you have a responsibility to understand the programs and resources that are available.” The same year, American Express developed its first online training addressing mental health, available to all employees. “We were really positively surprised how many people took advantage of it,” says David Kasiarz, executive vice president of colleague total rewards and well-being.

Companies often stay quiet about mental health for the same reasons people do. When Booz Allen Hamilton added mental health to its employee-wellness program in 2015, “even my own team of HR professionals were a little nervous about going into this,” says chief people officer Betty Thompson. “They weren’t sure they were equipped to deal with what might come forward to them.” Now, when employees disclose issues, an accommodations team figures out how best to help, perhaps offering a quieter space to work or a more flexible schedule. In 2018 and 2019, the firm also trained all employees to spot the warning signs of depression.

Support can come from colleagues too. “We’re definitely seeing a growing number of peer-to-peer support programs being developed in the workplace,” says Darcy Gruttadaro, director of the Center for Workplace Mental Health at the American Psychiatric Association Foundation. “Connecting with others is really important, because mental-health conditions can be very isolating.” More than 200 companies—including Unilever, Starbucks and Zappos—have used Mental Health First Aid at Work, a four to eight-hour in-person course that teaches people how to talk to struggling colleagues and where to refer them. “We have had to turn people away and schedule more courses” because it’s so popular, says Cathryn Gunther, associate vice president of global population health at Merck, where employees who take the longer version of the course are designated as resources (identified by a custom email signature or a small button on their lapels—the company is still testing ideas) for other employees to go to.

When Chai graduates from Berkeley in May and decides where to work, “it definitely comes down to the culture,” she says. “Not how much money I’m making, but is this going to be healthy for me on a day-to-day basis, having the sort of hours I’m expected to work? My relationship with my manager: Will it be more top-down, or are we going to be able to have more face-to-face or horizontal check-ins?”

That’s the price of admission for access to more and more young workers. And smart companies understand. “I think it’s going to take us speaking up for what we want,” Chai says. “But I think they’re definitely going to get on board.”

TIME’s Davos 2020 issue was produced in partnership with the World Economic Forum. 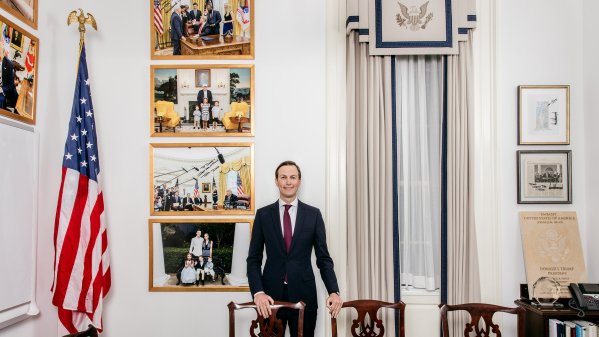