How Mad Men Gets the Writing Right: Q&A

There is no show on television that is more combed through, picked over and squawked about than Mad Men. Whether Joan mentions lustrous restaurant Le Cirque before it actually opened or Peggy says she “feels good about” something before that phrase became popular, it will be noted by (lovingly) persnickety viewers. Among the team of people checking and double-checking that these characters from the 1960s — and perhaps soon the 1970s — sound authentic are Allison Mann, the show’s head of research, and Erin Levy, writer and supervising producer. TIME spoke with them about how they keep Mad Men, which kicks off its final season on Sunday, firmly planted in the point of history where creator Matthew Weiner has steered it.

TIME: What steps do you go through to ensure that the language, particularly the dialogue, is accurate?

Erin Levy: Every season, we try to engulf ourselves in the period, watch movies from the year that we’re going to be writing about. We read TIME, LIFE, Playboy, the New York Times and the New Yorker. Then there are a lot of books, too, people writing in the time rather than about the time, which is important. We read John Cheever, who is a great source, and The Girls In the Office by Jack Olsen [about girls “who come to get a superjob in the big city” as the dust jacket says, in the late 1960s and early 1970s]. And then, coming on this show as a writer, my job is to write like Matt. Part of that is getting an ear for how he writes, and because you can have an ear for how someone else writes, you can have an ear for learning how a period is, too. Once you engulf yourself, you start to really get the hang of it.

So after the initial draft, what steps does the language go through in either getting approved or chucked out for being anachronistic?

Allison Mann: I go through the outlines as well, but once there’s a first draft of the script that’s distributed to everyone in our office, I go through it. Anything that is an idiom, I check. The idioms [like “what goes around comes around” in the Season 6 premiere] are more obvious than the more casual interjections, like the way you say “Excuse me” or “Wait a second,” those kinds of introductions to sentences that aren’t quite idioms… Looking at etymologies of words and phrases we use, we often find that these words are actually extremely old — a lot of it comes from Shakespeare. That’s fun to discover, especially about a phrase that you think might not be period or that sounds really contemporary, to say, this has been in the language, whether or not it was popular or common, hundreds of years.

Are there examples off the top of your head?

Allison Mann: All the things off the top of my head are from this season, so I can’t say …

So you sit there and scour the script and check etymologies. What if it is the case that a word has, say, been around since the 1830s but wasn’t popular during the time the season is set?

Allison Mann: The word merger was like that. I randomly caught this NPR program talking about anachronisms in shows. There was a linguist, and the only thing he pointed out in Mad Men was the word merger, because last season we were talking about that. I looked that up. It goes back to the 1850s, and it actually was commonly used. Language is really, really tricky to trace.

Erin Levy: Allison double-checks a lot of this stuff against articles of the time, to make sure it was being used. Sometimes you’re shocked as to where she finds certain databases.

Allison Mann: Any historical newspaper is a wealth of information about language in the period. So if there’s a whole article about a business merging, in the ’60s, and they reference the word merger multiple times, that means that the word was in the consciousness of the period. Because why else would that reporter be using that word?

So once you’ve given the script the okay, is it good to go, or do some words get chucked after that?

Allison Mann: As the scripts go through different drafts, I’m constantly revising the language in it. Because when you’re in your own period, you’re in our time, sometimes certain words feel so natural and old—I’m having to constantly prevent myself from assuming that something is period when it might not be.

Erin Levy: We also have people working on the show who were working during that period. They’ve been amazing references. If there’s something that you don’t expect, you can always go to these people and say “Hey, what do you think about this?”

Would you ever let an anachronism purposefully slip through, if a word or phrase was just right for the scene?

Erin Levy: No. In fact we’ve changed stuff before where we saw it and thought, it’s really funnier this other way, but we have to change it because it’s not right. And then we figure out a funny way to do it in the period.

Allison Mann: There are really, really obscure references … The decision has been made, maybe once, [to use] the idea that maybe the character coins the phrase. I won’t tell you which ones they are …

There is an expectation that Mad Men gets fact-checked like no other show. What is your reaction to linguists or lexicographers who are persnickety, saying that Don would have said “have to” instead of “need to” or whatever it might be?

Erin Levy: I think it’s amazing that people are that engaged, because we’re so meticulous about it, it makes them search harder for whether it’s true or not. It just shows the level of detail that goes into the show and the level of viewership that the audience has. It’s really incredible.

Allison Mann: It’s really exciting that people care that much, to look it up themselves. That means I’m not the only person doing it. It’s great to think other people are excited about doing it as well.

Are there general rules of thumb you might develop during a season, like typical linguistic habits that people had? If so, how much do those change from season to season?

Erin Levy: I would say that there has definitely been an adjustment. As we got later in the 60s, there was an effort [to include] certain words that were coming into the world that hadn’t existed before. Some of them were introduced by Ted Chaough’s character [who, played by Kevin Rahm, is Peggy’s boss and love interest in Season 6], because it was a new character coming in and we could say, oh, this character is hip, he understands. And you’ll see other characters are using terminology that certain characters wouldn’t because they’re a little bit more of a ’50s type of person.

Allison Mann: Right. The writers aren’t just going to have the characters saying “groovy” and all the stereotypical ’60s words unless it’s warranted, unless it’s natural for that character to be saying that. They’re not going out of their way to interject period language.

Erin Levy: I think Ted Chaough was the first person who said groovy on the show. And we’re saying that’s part of his character, that he’s aware of what’s going on in the culture.

Are there types of language that are particularly interesting or difficult to work with, like business lingo or slang?

How would you characterize Matt’s style?

Erin Levy: It’s just a hard question. He such a complex writer. He has this amazing ability to write both dramatic and funny scenes. You may be in the middle of something so emotional, and then all of sudden you’re laughing. And I also think he has an incredible ability to write to silences. People always talk about the silences on the show and how they mean so much, but they only mean something if you have written to that point. And Matt really understands the value of doing that, and that moment of silence, communicating some verbally as well as non-verbally.

Is that a hard craft to learn — writing to silence?

Erin Levy: At a certain point when you understand the show, you just understand that. You view it and understand how to do it. Sometimes we have a tendency to want to explain things that may not be completely evident, and on this show, we just trust the audience to understand what’s going on. And that’s something that you learn, but I don’t know if it’s difficult. In a way, it’s a profound thing to learn.

Are characters ever crafted with this notion in mind, that they could bring a different type of language to the show?

Erin Levy: Certainly when you’re bringing in new characters, you’re trying to bring in someone who hasn’t existed before. And that can have to do with someone who is in touch with the culture, and language will become a part of that.

Are there things people are always asking you when they find out what you do?

Erin Levy: People always ask about the writers’ room. There’s a group of writers and we figure out the stories together. Matt comes in at the beginning of the year, and he has an idea of where he wants to go for the season. Lots of times he has very specific things that he wants to do. And we then start figuring out the arcs of the characters and fill in what’s missing and bring in the ideas that we have. As the season goes on, Matt gets pulled in a million directions, he’ll come in and we pitch things to him. A lot of us who became writers on the show were fans of the show beforehand. So we come in and can’t believe we’re writing the show and just want to make a story that would be exciting for us, too.

Allison Mann: We can’t go into details, but I guess the one thing we can say is that we are going forward in time. I can’t tell you how far forward into time. So there are a few phrases I’ve checked that are becoming acceptable, that are becoming part of the landscape of language as language unfolds in time. 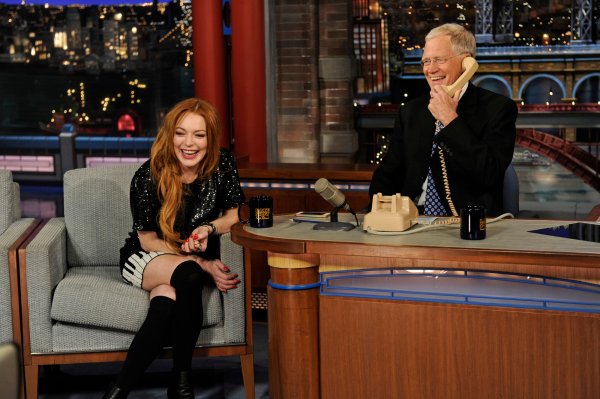 Lindsay Lohan Calls Oprah on The Late Show
Next Up: Editor's Pick