The last thing on Geru Drolma’s mind was becoming an internet celebrity. All she wanted was to make rent.

But the steamed buns Drolma rose at 5 a.m. each morning to make in her village in western China’s Sichuan province just weren’t selling fast enough. So with the bills mounting up, Drolma set off to hunt for wild fungi she hoped to sell at the local market, following the same azalea-strewn mountain paths carved by generations of her fellow ethnic Tibetans before her.

Finding the best fungi varieties—like the sought-after matsutake, or pine mushroom—is not easy. The finest specimens only grow around the roots of pine trees from August to September at an elevation above 13,000 feet. But Drolma grew up foraging on the frigid Tibetan Plateau, and was well-trained by her father how to spot that telltale bulge of the earth, the loosened topsoil, which betrays a fattened mushroom ripe for picking.

“Matsutakes can only be found by experienced people,” Drolma, 22, tells TIME, adding with a laugh, “My husband, for example, hasn’t dug out a single one so far!”

Matsutakes are one of the world’s most valuable mushrooms. Impossible to commercially farm, they can command up to $1,000 per kilo in the tony delis of Tokyo or Shanghai. Not that people in Drolma’s remote village on the Tibetan plateau had any idea. That was until Drolma posted a cellphone video to live-streaming app Kuaishou of her trip for picking fungi.

That post received 600,000 views; commenters swamped Drolma with positive feedback and requests for matsutake mushrooms and cordyceps, another fungus native to the region that grows on the bodies of caterpillars and is used in Traditional Chinese Medicine, and can fetch a whopping $20 per gram.

Before long, Drolma had sold the family’s small shop and dedicated herself full time to live-streaming. As her celebrity grew, so did demand for fungi, leading Drolma to set up a collective with local villagers and farmers. Last year, the group generated $500,000 in revenue over the five-month picking season—an enormous windfall in what’s historically one of China’s most impoverished regions. Other than foraging, her posts showcase other aspects of traditional Tibetan life, such as roasting meat over campfires, dancing in traditional garb, and herding black pigs across the snow-capped landscape. Just over two years since she posted that initial viral clip, Drolma now has 1.9 million followers.

“My family strongly opposed our decision to concentrate on live-streaming at the beginning,” she recalls with a smile. “They didn’t understand online money you cannot see or touch, and said that I acted like a beggar by taking videos during private times like meals. But I never thought about giving up.”

It’s a success story that highlights how even people in the most far-flung communities are being lifted out of poverty by technology—particularly artificial intelligence, or AI. Since China embraced economic reforms in the late 1970s and embarked upon an export-led boom, rural people sought fortunes in coastal manufacturing hubs, which often decimated the communities they left behind. But now, modern delivery services and AI-powered online marketing are allowing people like Drolma to develop flourishing businesses that showcase and enhance traditional life without leaving home. Eradicating poverty by 2020 is a key policy priority of China’s strongman, President Xi Jinping.

For a while, it was Drolma’s natural charm that clicked with harried urbanites eager to rediscover China’s forgotten cultures. But key to connecting content provider and consumer were the algorithms employed by the Kuaishou live-streaming app that she uses, which has garnered 200 million daily active users since its launch in 2011.

All uploaded content is forensically parsed: the facial expressions of those featured, any objects included or action taking place, what background music is playing, even the style of a protagonist’s dancing. Any words uttered are automatically transcribed by embedded voice recognition software and mined for keyword tags.

Users, too, are evaluated depending on their location, whether they connect by Wi-Fi or 4G, and their behaviors on the platform, such as how often they click, comment and share videos. Kuaishou doesn’t only show users content that directly correlates to their interests, but also attempts to broader the topics they see depending on what works with similar profile types. That, the firm says, enhances users’ experience. The firm recorded close to $78 million in gross revenue in the second quarter of 2019, according to data analytics firm Sensor Tower, a 57% year-on-year rise.

“We want to give as many people as possible the opportunity to be seen by the world,” says Zheng Wen, head of AI for Kuaishou.

While most social media is dominated by a tiny number of celebrities and viral videos, what sets Kuaishou apart, says the firm, is the “democratization” of the 15 million videos uploaded every day by its 700 million registered users. The app helps laypeople without any photography training produce professional-style video clips—including Hollywood-esque special effects—with just a click of a button, and ensures that those clips are seen by a wide range of people.

Kuaishou’s archive of 13 billion videos is filled with surprise stars, ranging from wacky amateur inventors, rural schoolchildren who must scale cliffs via rickety ladders to reach class, to chefs who specialize in giant seafood. An online store and gift application allows easy monetization.

“China is so vast and dynamic,” says Maggie Long, until recently senior public relations officer for Kuaishou. “Your life might be really common to yourself, but it can be really interesting to other people.”

Drolma can attest to that, though she’s careful not to lose touch with what led to her stardom in the first place. Thanks to the revenue streams offered by an AI-powered app, she hopes her two young children can live prosperous lives while maintaining their traditional Tibetan culture.

“I grew up digging mushrooms and feel that my life is meaningful in this way,” says Drolma. “So I love it very much.”

—With reporting and video by Zhang Chi/Daocheng, Sichuan 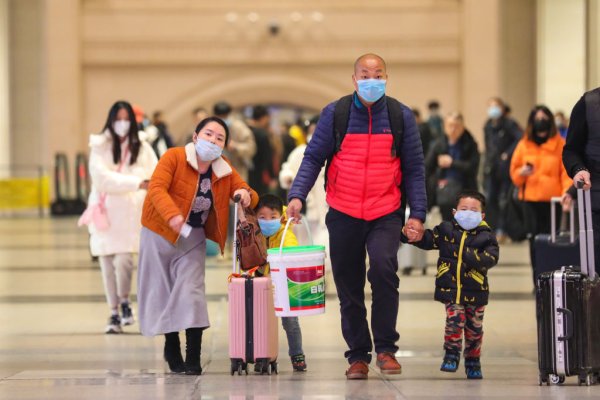 Wuhan Coronavirus Death Toll Rises to 26
Next Up: Editor's Pick