Who Is Carlos Ghosn, the Businessman Who Fled House Arrest in Japan and Turned Up in Lebanon?

Carlos Ghosn, former chairman of Nissan Motor Co., center, sits in a vehicle as he leaves his lawyer's office in Tokyo, Japan, on March 6, 2019.
Takaaki Iwabu—Bloomberg/Getty Images
By Tara Law

Auto industry experts say that Carlos Ghosn has a long history of beating the odds. During his tenure as the head of Nissan, he managed to step inside a company entrenched in the insular world of Japanese automakers and lead the company from the brink of bankruptcy to financial success.

Now, Ghosn seems to have pulled off a feat that seems even more improbable: escaping 24-hour surveillance in Japan to fly to Lebanon, apparently to avoid prosecution for alleged financial crimes.

Here’s what you need to know about the strange escape of Carlos Ghosn, the disgraced former head of one of the world’s biggest automobile groups.

Who is Carlos Ghosn?

Carlos Ghosn was long regarded as one of the titans of global auto industry. During his tenure as the head of Nissan and the French automaker Renault, he earned the nickname “Le Cost Killer” for closing factories and laying off employees. But he was credited for modernizing Nissan by bringing it back from the brink of bankruptcy and building what was regarded as the world’s largest automobile group.

Late in his tenure, however, Ghosn, who has French, Lebanese and Brazilian citizenship, reportedly started to butt up against Japanese corporate culture, where CEOs are generally paid less than in other countries and executive humility is valued.

In November of 2018, Nissan announced that an internal investigation into Ghosn and another executive found Ghosn’s compensation had been underreported. There was also evidence that Ghosn committed other misconduct, including personal use of company assets, the investigation found. Japanese authorities arrested Ghosn in Tokyo on Nov. 19 of that year, according to Bloomberg.

What are the charges against Ghosn?

Ghosn faces up to 15 years in prison on charges of financial misconduct.

The indictments against him include accusations that another former executive underreported Ghosn’s income, and that Ghosn transferred an investment loss to Nissan during the 2008 financial crisis, according to the Associated Press.

Ghosn has denied all of the allegations against him. After fleeing the country, he said in a statement that he left because he faced “injustice and political persecution,” according to the Associated Press.

Ghosn also appears to have broken Japanese law by jumping his bail and traveling to Lebanon.

How did Ghosn end up in Lebanon?

It’s not much of a surprise that Ghosn decided to go to Lebanon, a country where he is a citizen and has a home, and that does not have an extradition treaty with Japan. The bigger mystery is how he managed to escape 24-hour manned and video surveillance and travel out of Japan — even after his passports had been revoked.

The Wall Street Journal reports that Ghosn’s associates and his wife, Carole, had worked for months to form a plan to spirit the executive out of Japan. The Journal and other outlets reported that a private jet flew Ghosn from Japan’s Kansai International Airport to Turkey, and he was later moved to Lebanon. Various reports have suggested that he arrived in Lebanon using an ID card, a French passport, or a forged passport.

The Lebanese Foreign Ministry says that he arrived in the country legally, according to the Associated Press.

Can Ghosn be deported back to Japan?

After Ghosn fled Japan, Interpol, which fosters international cooperation among police departments, sent Lebanon a “red notice” for Ghosn, meaning he’s wanted for arrest. However, Lebanon is not obligated to send Ghosn back because it doesn’t have an extradition treaty with Japan.

Membership in Interpol is voluntary, and Lebanon doesn’t face any legal ramifications if it decides to ignore the red notice, says Michelle A. Estlund, a lawyer who specializes in Interpol criminal defense work.

“There are countries that don’t take any action, even if they know a person is the subject of a red notice and they know that the person is in their country,” Estlund says. Although ignoring the order may threaten Lebanon’s democratic relationship with Japan, it’s “not going to be penalized by Interpol or part of Interpol” if it chooses not to extradite Ghosn, she adds.

Estlund notes that a country may decide not to extradite someone for a variety of reasons. Extradition can be especially unlikely if officials are concerned that a prosecution may be politically motivated — as Ghosn alleges is the case in Japan.

In an interview with the Associated Press, Lebanese Justice Minister Albert Serhan seemingly cast doubt on whether Lebanon would return Ghosn to Japan. “Lebanese authorities have no security or judiciary charges against him,” Serhan said. “He entered the border like any other Lebanese using a legal passport.” 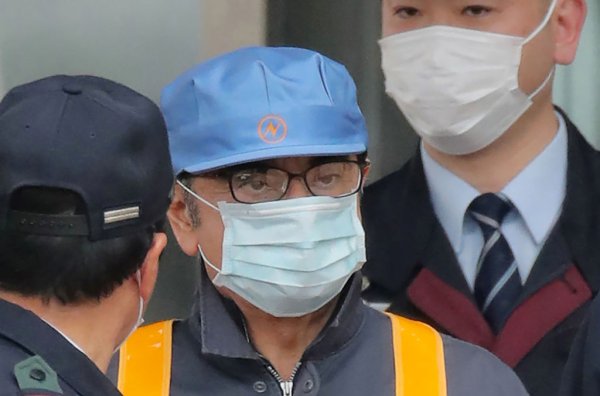 How Did Carlos Ghosn Escape Japan?
Next Up: Editor's Pick