An apparent kidnapping in Las Vegas just after midnight on Jan. 1 was captured on a Nest home surveillance camera showing a distressed woman unsuccessfully trying to escape a man who was chasing her, according to video released by police. The footage above is distressing.

The video, filmed at 12:48 a.m. on Jan. 1 at a home near Warm Springs Road and I-215, shows a crying woman running towards and banging on a door, pleading for help. A man exits a white sedan, and quickly runs up behind her before throwing her onto the ground and kicking her in the stomach.

“Get in the car,” he says, as she struggles. The man proceeds to drag her by the hair towards the same car before driving off.

The Las Vegas Metropolitan Police had requested the public’s help in identifying the victim and assailant; the agency said in a statement emailed to TIME that 23-year-old suspect, Darnell Rodgers, had been arrested on Jan 2. because of tips provided provided by the public. Rodgers has been charged with kidnapping and domestic battery.

The victim was also located but police did not elaborate on her condition. 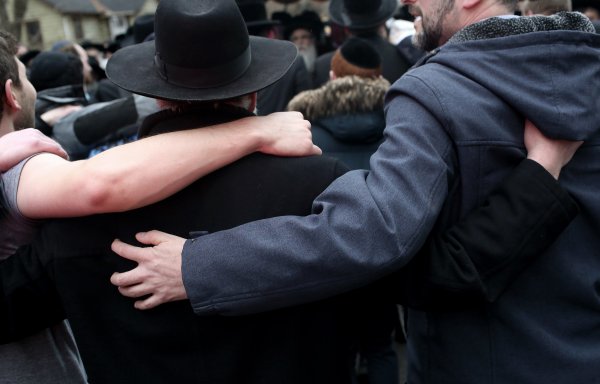 Family Says Victim Injured in Hanukkah Attack, 72, May Not Regain Consciousness
Next Up: Editor's Pick