Indonesian authorities re-opened the Halim Perdanakusuma airport in Jakarta for limited operations, as the death toll rises from the city’s worst flooding in almost seven years.

At least 16 people have died from the New Year’s Day flooding, with half of the victims in Jakarta, according to the disaster mitigation agency. Heavy monsoon rains had lashed the Indonesian capital and nearby cities since New Year’s Eve, and the weather agency expects the adverse weather to last until next week.

State-run airport operator PT Angkasa Pura II allowed the use of 30 meters of the 45-meter-width runway starting Wednesday afternoon at Halim Perdanakusuma, the city’s second-biggest airport. For now, the facility only caters to Airbus A320 and Boeing 737 planes, according to Polana B. Pramesti, the Transport Ministry’s director-general of civil aviation.

As many as 45 flights from the Lion Air group were diverted and rerouted, while 29 flights were canceled on Jan. 1, the airline said in a statement.

The country’s weather agency forecasts possible thunder and strong wind in the coming days, the Cabinet Secretariat wrote in a Jan. 2 statement.

President Joko Widodo ordered government agencies to prioritize security and rescue measures. Infrastructure matters will be discussed after the evacuation process is completed, the president told reporters in Jakarta on Thursday.

The Jakarta provincial government on Wednesday instructed schools and some offices to be prepared to provide shelter.

In January 2013, more than 30 million residents of the city were affected by flooding that killed dozens of people and inundated areas including the central business district. 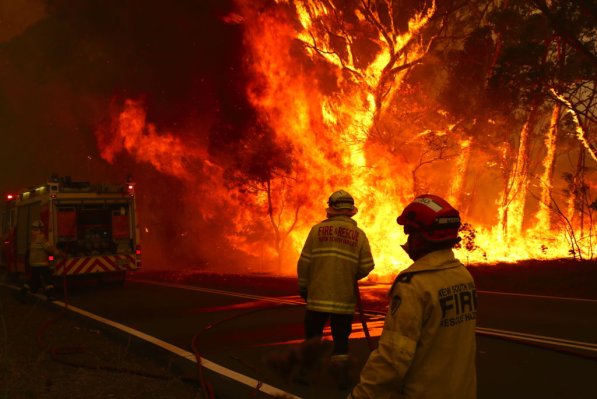 Bushfires Rage Outside Every Major City in Australia
Next Up: Editor's Pick