The chief of the Mobile, Ala., police department has apologized after two officers posed in a photo with a “quilt” constructed of cardboard signs that were apparently taken from people experiencing homelessness.

In a photo originally posted on Facebook, a pair of Mobile Police Department officers grin as they hold up the quilt, which displays more than a dozen signs such as “Trying to make it. Anything Helps. God Bless You.” The post, which was apparently taken down or made private, reads, “Wanna wish everybody in the 4th precinct a Merry Christmas , especially our captain . Hope you enjoy our homeless quilt! Sincerely, Panhandler patrol.”

On Monday, an apology from Mobile Chief of Police Lawrence Battiste was posted on the department’s official Facebook.

“As a police department entrusted with serving and protecting our community, we offer our sincerest apology for the insensitive gesture of a Facebook post by two of our officers where they are holding up a homeless ‘quilt’ made of panhandling signs,’ the post said. “Although we do not condone panhandling and must enforce the city ordinances that limit panhandling, it is never our intent or desire as a police department to make light of those who find themselves in a homeless state. Rather, our position has always been to partner with community service providers to help us help those faced with homelessness with hope to improve their quality of life.”

“The officers, the person taking the photo, the person that posted this and their supervisors should all be fired!! They all have shown they lack the professionalism and empathy required to obtain public trust!!” wrote Chris Shawver.

A department spokesperson confirmed to TIME that the officers’ names are Preston McGraw and Alexandre Olivier. The officers are still on active duty, but they are facing an internal investigation to determine whether they will be required to undergo training or punishment, the spokesperson said in an email.

About 551 people are homeless on any given night in Mobile City, Mobile County and Baldwin County, according to the National Alliance to End Homelessness. 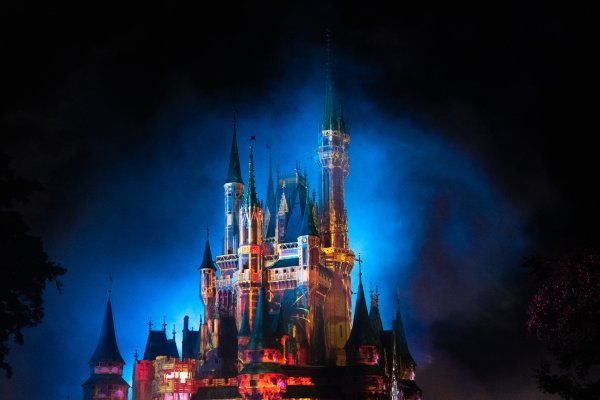 Woman Jumps From Ferry Boat at Walt Disney World in Orlando
Next Up: Editor's Pick