At least 28 people have been killed in a typhoon that devastated parts of central Philippines over Christmas, The Associated Press reports.

Typhoon Phanfone made landfall on Dec. 24 over the coastal province of Eastern Samar, according to the Philippine Atmospheric, Geophysical and Astronomical Services Administration (PAGASA). Destructive winds and heavy rains tore off roofs and inundated several holiday hotspots before the storm cut a path out to sea.

Known locally as Ursula, the typhoon forced tens of thousands of people to evacuate over Christmas, and disrupted holiday celebrations in Asia’s largest Catholic nation.

Boracay and Coron, popular destinations known for their white-sand beaches, were among the areas where tourists were stranded and communication lines were down.

“Everything within 100 meters of the airport looks broken. There are a lot of frustrated people at the airport as flights have been cancelled,” one tourist who was stuck at an airport that services Boracay told Agence France-Presse.

One disaster response officer described how power outages in the coastal town of Batad in Iloilo province turned the area into a “ghost town.”

“You can’t see anybody because there was a total blackout, you can’t hear anything. The town looked like a ghost town,” Cindy Ferrer of the regional Office of the Civil Defense told the Associated Press.

An estimated 115 domestic flights were canceled, according to the ASEAN Coordinating Centre for Humanitarian Assistance. Ferries and plane services were also suspended, AFP reports.

Several provinces in Visayas, a cluster of islands in central Philippines, were severely flooded on Christmas day, according to local paper Rappler. Photos showed houses and vehicles submerged in muddy floodwaters.

Typhoon Phanfone is traversing a similar path to the one taken by Super Typhoon Haiyan in 2013. One of the most powerful storms on record, Haiyan is estimated to have killed up to 10,000 people.

As the first major landmass facing the Pacific typhoon belt, the Philippines is prone to devastating natural disasters and records around 20 major storms per year.

An 11 a.m. notice Thursday said that Typhoon Phanfone had weakened as it moved over the West Philippines Sea, but left more rain in its wake in metro Manila and the tourist province of Palawan. A 5 p.m. update later that day noted that the typhoon would maintain its strength as it moved West-Northwestward; maximum sustained winds reached as high as 75 mph near the typhoon’s center. 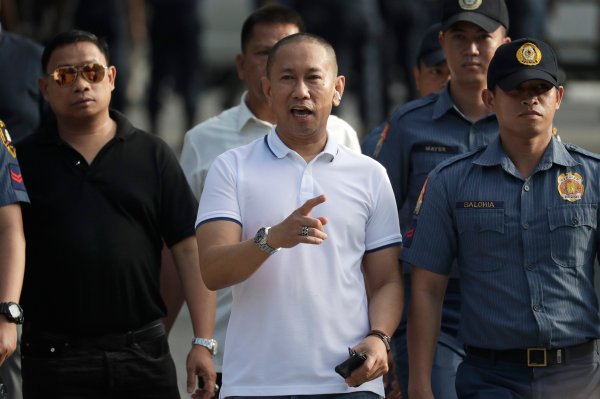 Members of Philippines Political Family Convicted in Deadliest Attack on Journalists in History
Next Up: Editor's Pick