Law enforcement in Colorado located a Texas family that had been missing for more than 24 hours in the San Juan National Forest on Dec. 24, 2019.
Photo courtesy of San Miguel Sheriff's Office
By Sanya Mansoor

Law enforcement found a Texas family “alive and with no serious injuries” on Christmas Eve after they were missing for 24 hours in Colorado’s Rocky Mountains.

Colorado’s San Miguel County Sheriff’s office said in a statement on Facebook that a man and his wife, both in their thirties, were with their 12-year-old daughter when they went missing in the San Juan National Forest on Monday. They were driving a rented truck from El Paso, Texas, to deliver furniture to Norwood, Colo., the statement said.

Law enforcement was tipped off to the family’s need for help after receiving a call from a concerned family member on Monday around 7 p.m. Initially, authorities could not find the family, even as they pursued a multi-county search into the night. But on Tuesday morning, San Miguel County Undersheriff Eric Berg found a truck, not far off from the family.

Berg was operating his personal aircraft when he spotted the truck, shortly before 9 a.m. A few minutes later authorities found the family walking on a forest service road just a couple of miles from the vehicle, the sheriff’s office said.

The man told deputies that they “relied on electronic GPS for the fastest route” to Norwood and were stuck in deep snow early Monday morning, according to the statement. Their efforts to dig the truck out of the snow were unsuccessful, he told police. To stay warm through the night, they “ran the engine overnight for heat and covered themselves in furniture blankets.” The next morning they prepared for a long journey trudging through the snow, wrapping their “tennis shoes with shipping plastic.”

Sheriff Bill Masters said in a statement that the family was lucky to be found but urged the public to remember that electronic GPS systems are not always reliable.

“The family is lucky to have had moderate temperatures and our ability to use aircraft to locate them,” Masters said. “But people need to remember that electronic GPS systems are not always the best guide.” 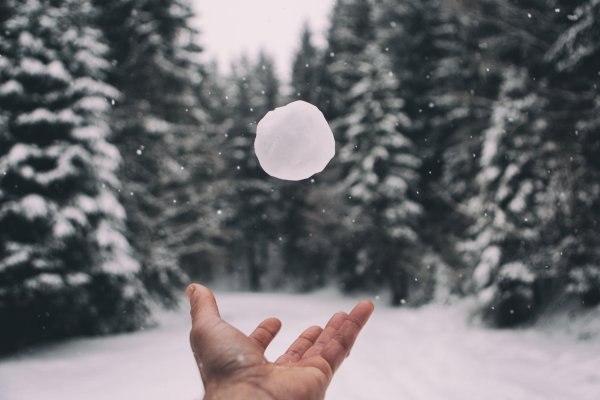 Snowball Fights Are Illegal in One Wisconsin Town. Now It Might Reverse the Longtime Ban
Next Up: Editor's Pick