Napp Nazworth, a politics editor at evangelical Christian newspaper The Christian Post, announced on Monday that he had resigned from his job after learning The Post planned to publish an editorial in support of President Donald Trump.

“I was told by our managing editor that they were going in the direction of being a ‘pro-Trump publication,’ and that they were [going] to publish an editorial that I could not support,” Nazworth tells TIME in an interview Tuesday, following a series of tweets in which he announced his resignation. “So it was sort of a mutual decision… we can no longer work together basically.”

The Christian Post told TIME in an emailed statement that they are “so very grateful for Napp’s contribution’s contribution over these many years” but stressed the company’s commitment to a diversity of opinions. “We will remain a publication rooted in our Christian faith and committed to objectivity in our reporting and diversity in our opinions,” the statement said.

Nazworth announced his resignation on Twitter on Monday evening, before the editorial was published. As of Wednesday morning the post has more than 73,000 likes.

“They’ve chosen to represent a narrow (and shrinking) slice of Christianity. That might be a good business decision, short term at least. But … it’s bad for Democracy, and bad for the Gospel,” he wrote in subsequent tweets. “It means there will be one more place where readers can go for bias confirmation, but one less place where readers can go to exercise their brains on diversity of thought.”

Nazworth, who had worked at The Christian Post for eight and a half years, says he would have been fine publishing the pro-Trump piece as an op-ed.

“As the politics editor of The Christian Post I have always welcomed diverse voices. I’ve published many op-eds I disagreed with,” he tells TIME. It was only once he learned the paper planned to publish the piece as an editorial, making it the position of the newspaper as a whole, versus that of an individual writer, that he felt he had to resign.

The Post’s editorial criticized the decision by another evangelical Christian magazine Christianity Today — which was founded by the famed evangelist Billy Graham — to publish an editorial of its own on Dec. 19, calling for President Trump’s removal from office. Evangelical Americans make up a sizable portion of the President’s base, and the CT editorial made headline news.

“CT’s disdainful, dismissive, elitist posture toward their fellow Christians may well do far more long-term damage to American Christianity and its witness than any current prudential support for President Trump will ever cause,” The Christian Post‘s editorial, written by Senior Managing Editor John Grano and Executive Editor Richard Land argues. It was posted on Monday.

Christianity Today‘s editorial kicked off a firestorm of a debate both among and beyond the evangelical community. President Trump hit back at the publication on Twitter, writing “I guess the magazine, Christianity Today, is looking for Elizabeth Warren, Bernie Sanders, or those of the socialist/communist bent, to guard their religion.”

In an open letter addressed to the paper, nearly 200 evangelical leaders condemned the op-ed. Meanwhile, Christianity Today has reported its subscriptions increased after the op-ed was published, and defended its position in a subsequent editorial on Sunday.

“Of course, we appreciate the support and listen humbly to the criticisms,” the second editorial titled “The Flag in the Whirlwind: An Update from CT’s President” said. “But at the end of the day, we write for a readership of One. God is our Tower. Let the whirlwind come.”

“I was actually kind of shocked that [the Christianity Today editorial] got so much attention. In 2016 they had a similar editorial,” Nazworth says. He adds that The Christian Post also published an anti-Trump editorial in 2016, titled “Donald Trump Is a Scam. Evangelical Voters Should Back Away.”

“People don’t realize there is a pretty big contingent [of evangelicals] that don’t support [Trump] as well,” he tells TIME.

Nazworth says that, while he agreed with a lot of the Christianity Today editorial, he believed it “sort of came out a little too early regarding whether or not Trump should be removed.”

“We haven’t had the trial in the Senate yet, and I think Trump should have the opportunity to defend himself,” he says. “The evidence is overwhelming but there is a reason to have the trial.” 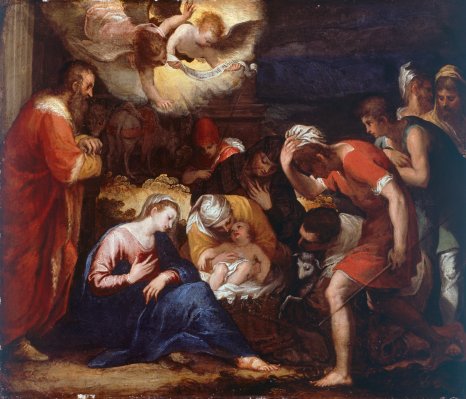 The Revolutionary First Christmas
Next Up: Editor's Pick