The unprecedented bushfires devastating swathes of Australia have already pumped out more than half of the country’s annual carbon dioxide emissions in another setback to the fight against climate change.

Fires blighting New South Wales and Queensland have emitted a combined 306 million tons of carbon dioxide since Aug. 1, which is more than half of Australia’s total greenhouse gas footprint last year, according to Niels Andela, an assistant research scientist at NASA’s Goddard Space Flight Center in Maryland and collaborator with the Global Fire Emissions Database. That compares with the Copernicus Atmosphere Monitoring Service’s estimate of 270 million tons in just over four months.

Destructive blazes have erupted in 2019 from the Arctic to the Amazon and Indonesia in what scientists are calling an exceptional year for wildfires. As places like Australia grapple with extreme weather conditions such as severe droughts and frequent heatwaves — often aggravated by climate change — they’re likely to suffer from more persistent and ferocious fires that will typically start earlier and last longer.

“We have been closely monitoring the intensity of the fires and the smoke they emit and when comparing the results with the average from a 17-year period, they are very unusual in number and intensity, especially in New South Wales, for being so early in the fire season,” said Mark Parrington, a senior scientist at Copernicus, the European Union’s atmosphere observation program.

NASA uses satellite data to analyze the correlation between historic fire detection and modeled emissions from historic fires. That relationship is used to predict emissions based on active fire detection in almost real-time. Andela acknowledged that the methodology is still under development and that there is a large degree of uncertainty associated with the estimates, meaning they could be on the high side. It could take months for more accurate estimates to be generated by fresh satellite data, he said.

Around 200 blazes were burning across the world’s driest inhabited continent on Monday. New South Wales, the most populous state, remains at the forefront of the disaster with almost 800 houses lost since the fire season began unusually early in the midst of winter. The crisis has spread to South Australia state, where an estimated 86 homes were destroyed at the weekend.

Organic matter aerosol and carbon monoxide, good tracers of smoke, have already transported across the Tasman Sea to as far as South America, Copernicus said in an emailed response to Bloomberg.

And conditions are unlikely to improve anytime soon. Australia’s Bureau of Meteorology is forecasting above-average maximum temperatures for most of Australia for at least the first quarter of next year. Northern New South Wales and southern Queensland are experiencing record-breaking dryness, and very low levels of soil moisture threatens to slash national summer crop output for a second year by 52% to 1.24 million tons, according to the Australian Bureau of Agricultural and Resource Economics and Sciences.

Wildfires across the globe have released approximately 6.38 billion tons of carbon dioxide into the atmosphere in the first 11 months of this year, according to Copernicus. These blazes can be responsible for far greater air pollution than industrial emissions and produce a combination of particulates, carbon monoxide and other pollutants, which can be hazardous to the health of all life on the planet, the European group said.

According to Andela, it’s not uncommon for Australia’s emissions from wildfires to exceed CO2 from fossil sources because large wildfires in savannas and grasslands, mainly in the northern regions of the country, are a natural part of ecosystems. But this year’s fires in New South Wales — largely occurring in forested areas — are exceptional as it can take much longer for the vegetation to recover.

“In savannas and grasslands, regrowth of burned vegetation typically absorbs the emitted carbon dioxide within a few years, but for forests, this may take several decades,” he said. “From a carbon cycle perspective, the key question for New South Wales would be how quickly the vegetation is able to recover, or if some forests may never fully recover at all.”

Australia’s conservative government in 2014 dismantled a carbon trading mechanism that put a price on emissions. Prime Minister Scott Morrison says the nation is on target to meet its Paris Agreement commitments, but at the same time wants to increase sales of coal — the biggest export earner last year. 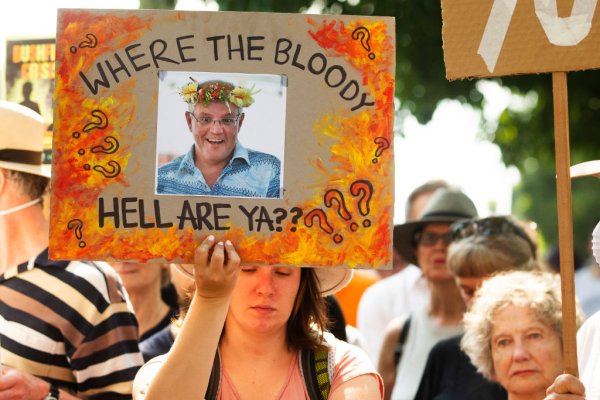