A pilot on a jet carrying Amazon.com packages that crashed near Houston in February had a record of repeatedly flunking flight tests and may have become disoriented in clouds, according to newly released documents.

The pilot mistakenly thought the plane’s nose was pointed too high and jerked the jet down so steeply that the Boeing Co. 767 dove into a marsh, even as the captain fought to pull up, according to National Transportation Safety Board records released Thursday.

“Lord…you have my soul,” Conrad Jules Aska shouted a second before the high-speed impact of the Atlas Air cargo plane, according to a transcript of the cockpit recording.

Aska, serving as copilot on the flight, Captain Ricky Blakely and a third pilot for another airline, Sean Archuleta, who was sitting at the rear of the cockpit, died in the crash on Feb. 23. The impact littered a bay near Houston with packages and debris.

The NTSB released 2,279 pages of raw investigative reports, providing the first insights into what led to the crash of the jet, which was on a contract flight for Amazon. They stopped short of providing any formal conclusions of the cause, but raised issues with pilot hiring practices and the availability of previous records of failures.

The safety board will conclude the cause of the crash sometime in 2020. Atlas, a division of Atlas Air Worldwide Holdings Inc., said in an emailed statement it is cooperating with the NTSB’s investigation.

“We remain devastated by the loss of Flight 3591 that claimed the lives of two of our valued pilots and a colleague,” the company said in the statement.

Atlas’ training and workforce “meet or exceed all government safety standards” and the company continually evaluates its hiring procedures, the company said.

The jet was descending routinely toward Houston George Bush Intercontinental Airport when it hit turbulence at 12:38 p.m. local time, according to the NTSB.

The copilot made two comments about being in an aerodynamic stall, which can cause a dangerous loss of lift on the wings. However, the plane was flying normally and nowhere near a stall, according to investigators.

The copilot then added full takeoff power without informing his captain, as is required. A few seconds later, possibly due to being disoriented and thinking the plane’s nose was pointed too high, he pushed forward on the control column and the plane nosed over.

It reached speeds of about 500 miles (805 kilometers) per hour, according to NTSB data.

The copilot’s previous history of failures during training is likely to become an issue in the accident investigation. The NTSB cited similar issues after a crash on now-defunct Colgan Air killed 50 in 2009 near Buffalo, New York.

The Federal Aviation Administration has been attempting to create a better system of logging airline pilot records since that crash, but hasn’t completed the effort.

Aska didn’t mention in his job application to Atlas that he’d been employed briefly by two other carriers, but had departed after being unable to complete training, according to the NTSB.

The airline wouldn’t have hired him if it had known his complete record, the director of training told investigators.

Confusion reigned in the cockpit during the final dive, according to the recording of their comments and flight data.

Blakely, attempting to counteract the dive, was pulling the controls in the opposite direction as the copilot.

“Oh, lord have mercy myself,” Aska said as the dive began.

“Pull up,” shouted Archuleta from the jump-seat. 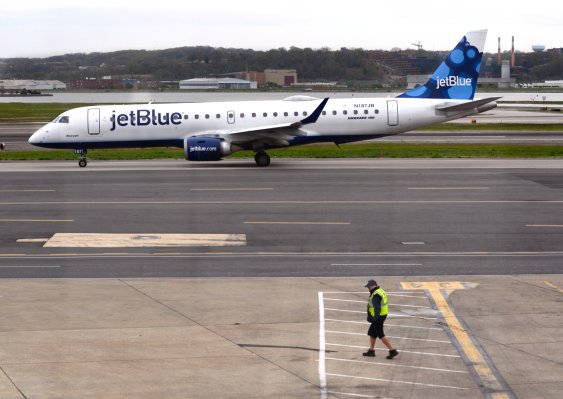 This New JetBlue Security Question Is Proving Almost Impossible to Answer. Or Is It?
Next Up: Editor's Pick