Bethlehem Is Gearing Up for Its Busiest Christmas in Years. But the Town Is Also Worried

For centuries, Star Street in Bethlehem—believed to be the path taken by Mary and Joseph from Nazareth to the Church of the Nativity—was a bustling hub for craftsmen, workshops, and souvenir stores. It was the center of Palestine’s mother-of-pearl industry in the late 19th century until it crumbled a century later amid a tide of global economic stagnation. Star Street fell into decline, particularly after Bethlehem, a small town of 25,000 in the West Bank, was besieged by Israeli troops at the height of the Second Intifada (or Palestinian uprising) in 2002.

But now Star Street is being restored—and with Christmas just around the corner, Palestinians are hoping that visitors and pilgrims will make their way in large numbers to celebrate Jesus’ birth in Bethlehem. Christmas is the most popular time for visitors; this season alone, the city’s mayor expects 1.4 million tourists in Bethlehem. “I have been mayor for 2.5 years. I have celebrated Christmas for three seasons and each season, [celebrations] are more organized and more attractive for the local community and for tourists,” says the city’s mayor, Anton Salman.

Since 2017, the numbers of tourists have been on the rise, explains Salman. Bethlehem has especially grown into a hub for pilgrims who visit the Church of the Nativity, which marks the site of Jesus’ birthplace. And this season, Palestinians are looking to capitalize on the ongoing restoration of important historical and religious sites.

“The reconstruction of Star Street will be done before Christmas,” says George al-Ama, a researcher who specializes in Palestinian cultural history. The street “was recently used by the Custos of the Holy Land who came to Bethlehem carrying a relic from the Vatican.” The artifact — a piece of wood thought to be from Jesus’ manger — is being celebrated by Palestinians, who are excited it’s back just in time for Christmas and hopeful it will attract more pilgrims to the city this festive season.

Main doors of Mosaic centre in Bethlehem and a view of the Star Street in Bethlehem, West Bank on April 6, 2019.
Dominika Zarzycka/NurPhoto via Getty Images

Bethlehemites are also gearing up for the Christmas period with a newly renovated Church of the Nativity, which has undergone restorations since 2013 to its leaky roof, tattered windows, and covered mosaics.

“We completed the consolidations of the Narthex — the entrance of the church — the roof and then we started with the external wall facades, wall mosaic, wooden Architrave and internal plastering and columns, floor mosaics and currently we are [working on] the marble tiles,” explains Afif Tweimeh, a Palestinian engineer overlooking the restoration work.

The renovations helped the team uncover several images of Jesus, angels and saints. Workers also found a small baptisimal font within a larger vessel that Tweimeh believes was used to baptize babies.

“Every day in this project is a special day. This was especially [true] when we were restoring the wall mosaics. From here to there you can see different shapes,” he said, referring to 1,300-square feet of wall space. “It was just amazing.”

Priests pray in the Grotto of the Church of the Nativity, the site where Christians believe Jesus was born, in the West Bank holy city of Bethlehem on December 18, 2019.
Musa Al Shaer—AFP via Getty Images

But Bethlehem has not reached its full potential as a tourist destination, says Fadi Kattan, a popular Palestinian chef. “Tourism is not aid. Tourism is a development tool,” he adds, highlighting that unskilled Palestinians can find jobs much more easily in the tourism business. “The only sector in this country where we can deal with unemployment of people who [don’t] have formal education is tourism.”

As a boy, Kattan used to play in a forest near his home in Bethlehem, filled with thyme, a prickly plant locally known as akoub, and other herbs. Today, Kattan, 41, can no longer forage that area for the indigenous spices used in the dishes he prepares for visitors. The forest has gone, replaced by an Israeli settlement.

Kattan runs Fawda, a gourmet restaurant at Hosh al-Syrian, a guest house he also operates just a few blocks away from the Church of the Nativity. This Christmas, he’s expecting a full house, but there are many obstacles in ensuring his guests have a merry one.

“We have no access to a lot of our own resources,” he says. “Most of the farmers [I get my produce from] are in villages just outside of Bethlehem. I have no guarantee of getting [the produce] delivered every day,” because of Israeli checkpoints and hindrances to movement, he explains. Bethlehem is only five miles from Jerusalem, is hemmed by Israeli settlements and disconnected from the Holy City by a 479 mile-long separation wall.

Even some delicacies that are popular on Palestinian dinner tables are forbidden from being harvested because Israel considers them protected plants.

“Israel has forbidden us from foraging akoub, a little delicacy [you find] in a very short season,” Kattan says. “The Israelis say it’s forbidden for us to pick it because it’s an endangered species, while at the same time in Israel, it is being picked and sold on their markets. This double standard is a problem.”

Kattan says Bethlehem needs to find its identity outside the Christmas period. “We need to offer something that’s cultural…and combines a bit of the spiritual,” he said. “Bethlehem has enormous potential. Our potential is forbidden for us to exploit, because of the Israeli settlements and the separation wall,” that cuts Bethlehem from its twin city, Jerusalem.

When the Oslo agreement was signed between the Palestine Liberation Organization (PLO) and Israel in 1993, there were 40-50,000 settlers living in the Bethlehem area, according to Suhail Khalilieh, head of the settlement monitoring department at ARIJ, a local research institute.

“From that time on, Israel has built more than 30,000 housing units,” he said, adding that the number of settlers today is approximately 165,000, quadrupling in size over the past two decades. “Bethlehem will [see] at least double this number within the next decade if nothing changes.” Approximately 51 miles of the wall is erected on Bethlehem land, leaving “about 27% of the area off limits to the Palestinians,” Khalilieh says.

And because of access, it’s not always easy to promote Bethlehem as a tourist destination or to capitalize on its historical and religious sites. “Tourist buses have to queue at the Israeli checkpoint and come from there to Bethlehem,” George Rishmawi, a Palestinian tourism expert. “It’s not very easy to visit Bethlehem; many people try to avoid it for this reason.”

When tourists do come, they spend only a few hours in the city, mainly visiting the Church of the Nativity, before heading back to Israel. Some Palestinians believe this is problematic, as it creates a disconnect between Bethlehem and its people.

“It reflects a Christian theology in which [many] look at our land but don’t look at the people, communities and history,” said Rev. Munther Isaac, Lutheran pastor of Bethlehem. “If you look at travel itineraries, they follow biblical sites only, as if nothing happened in time from the year 33 AD until today—as if no one lived here, as if no culture developed here.”

Despite the long-standing issues hampering tourism in Bethlehem, positive changes on the ground have seen the number of Bethlehem’s hotels expand. Days before Christmas eve, Manger Square is abuzz with tourists taking selfies by the newly lit tree erected by the municipality.

“I believe this year will be an attractive season for tourists,” Salma says. “We are hoping that despite the hardships, this season will be better than before. Some people have fears because of the occupation. But the city is quiet, calm. There’s nothing to be afraid of.” 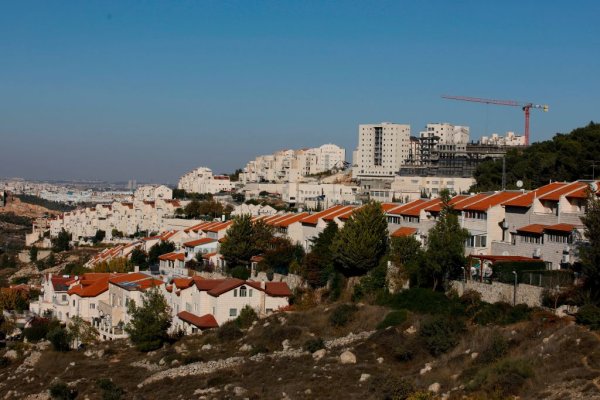 What to Know about the U.S.' New Israeli Settlements Policy
Next Up: Editor's Pick