The look, the sound, and the speech of Hollywood’s Golden Age did not originate in Hollywood. Much of it came from Europe, through the work of successive waves of immigrants during the first half of the 20th century. The last several of those waves brought a group of traumatized artists who were lucky enough to escape Hitler’s death trains and extermination camps. All were antifascists; a few were Communists; most were Jews. These were Hitler’s gift to America — prodigious individuals who enriched the film culture and the intellectual life of our nation, and whose influence continues to resonate. Plenty of writers have explored the ways these refugees, exiles and émigrés managed to escape from Europe. Fewer have told about the Americans who had the courage to take them in. Of those heroic citizens, at the top of the list for her uncompromising conviction and generosity, was a too-often-forgotten screenwriter in Santa Monica named Salka Viertel.

Salka Viertel was a recently naturalized American when Hitler’s war began, having arrived from Berlin on a visitor visa in Hollywood with her husband during one of the earlier waves of emigrating filmmakers, in 1928. She became a proud and grateful U.S. citizen in February of 1939, only months before the official outbreak of war in Europe on Sept. 1 of that year. It was her very Europeanness that had alerted her early on to the growing conflagration across the Atlantic, well before Hitler took power in 1933. She had been raised in a well-heeled Jewish family in a garrison town in Galicia called Sambor, on the fringes of the Austro-Hungarian Empire, where she’d been born in 1889. And she came of age as an actress on the stages of many European cities, most notably Weimar-era Berlin. Long before the advent of National Socialism made anti-Semitism official state policy in Germany, Salka Viertel was quite familiar with its lethal intentions. Thus after 1933 she was extra sympathetic to the attempts of the panicked human beings who began to launch themselves desperately, in any way they could, toward the possibility of safety in America.

An estimated ten thousand refugees from Germany and Austria settled in greater Los Angeles between 1933 and 1941, a significant part of “the most complete migration of artists and intellectuals in European history” up to that time, according to California historian Kevin Starr. Members of Salka Viertel’s own family were among those refugees, as were hundreds of her friends and many more strangers. In Santa Monica, she made it her mission to provide a refuge for them in her own home and to absorb them into her social and professional network, all to help them survive in a wholly unfamiliar new world.

America’s own deeply rooted anti-Semitism, the eruptions of homegrown fascism that emerged in the 1930s with rallies sponsored by the Silver Shirts and the German American Bund, and widespread anti-immigrant sentiments stoked by such fearmongers as Father Coughlin were factors in the Roosevelt administration’s reluctance to alter strict immigration policies that had been further tightened during the Great Depression. While Roosevelt was not unsympathetic to the plight of Europe’s Jews, during the early years of his administration his chief concerns were domestic, focused on boosting employment and fostering an economic recovery. Later, after 1941, he concentrated almost exclusively on winning the war. And so it became clear that rescue for the Jews, as Hitler set out methodically to kill them all, was not likely to originate with U.S. government agencies. It would be individual efforts such as Salka Viertel’s, synchronized with organizations like Hollywood’s European Film Fund and Varian Fry’s Emergency Rescue Committee..

But Salka Viertel has been more or less forgotten in America, because too few people believed that what she accomplished was important. To survive and flourish in the hostile environment of the Hollywood studio system; to use her influence at the studios to petition for sponsors, affidavits and jobs for refugees; to turn her home into the endpoint of a transatlantic routing network for those refugees, providing welcome, food, shelter, camaraderie and introductions to potential employers; to speak out against intolerance, censorship, political inquisitions, and the curtailing of human rights in the name of national security — all seeds of fascism in the United States that threatened to sprout as poisonously as they had in Germany: in the end, none of this has been deemed thus far to be worthy of our attention. It was just one woman’s response to the events of her day — events that, clear as they may seem in hindsight, were as bewildering in their time as those in our time are to us.

What kept the luckiest of the 1930s refugees going, as Elie Wiesel wrote about Adam in the book of Genesis, is that God gave them a secret: not about how to begin, but how to begin again. Yet it was impossible to begin again without the help of people like Salka Viertel, who welcomed them into a community after their own had been eradicated.

It was a personal financial crisis that had brought Salka Viertel to California in 1928, and it was another that forced her to leave, in the early 1960s, to begin a self-imposed exile in the Swiss Alps. Both predicaments had come about through a larger political context, but they were not, in the end, a political story. They were, and are, a human story. A woman, finding good fortune in a foreign land, comforted and fed and housed the survivors of an overseas genocide. In her old age, when her fortune was gone, only a few family members and friends remained to feed and comfort her, and to remember her after her death. As witnesses to this story, we might ask again: what does it say about our values that we have chosen to dismiss so large and estimable a life as Salka Viertel’s?

Excerpted from The Sun and Her Stars: Salka Viertel and Hitler’s Exiles in the Golden Age of Hollywood, coming soon from Other Press. Copyright © Other Press, 2020. Reprinted by permission of Other Press. 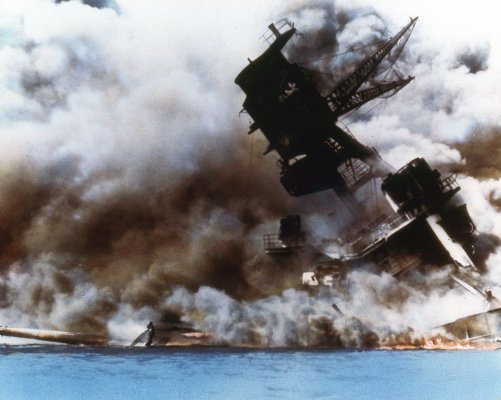 What Happened to USS Arizona?
Next Up: Editor's Pick