An immigrant family on the dock at Ellis Island, N.Y., looking at New York's skyline while awaiting the ferry to take them there, in 1925.
Bettmann Archive/Getty Images
By César Cuauhtémoc García Hernández

Every year, roughly 4 million people visit the Ellis Island immigration station, wandering the manicured museum grounds and gazing at the nearby Statue of Liberty. But today’s experience visiting the tiny speck of land off the southern tip of Manhattan is a far cry from what Ellen Knauff saw there in 1948. “The whole place [had] the look of a group of kennels,” she wrote in her memoir years later.

Born in Germany, Knauff spent part of World War II working for the United Kingdom’s Royal Air Force and later the United States Army. After the war, she married Kurt Knauff, a U.S. citizen and Army veteran stationed in Germany. Newly married, she traveled to the United States for the first time in 1948, planning to benefit from a special immigration law enacted by Congress to make it easy for soldiers to return home with their new loves.

Instead, Ellen was greeted by the hard reality of the Ellis Island immigration prison. These days, most people think of Ellis Island as the place that welcomed generations of newcomers. That is certainly true. As many as 12 million people are thought to have first stepped foot in the United States through the island’s immigration offices, which opened on Jan. 1, 1892. But in 1907, its busiest year, one out of ten arriving passengers experienced Ellis Island as a hurdle rather than an open door, spending days or months stuck inside the detention center.

“As we approached Ellis Island, I could see that parts of it were enclosed by double wire fences topped by barbed wire and marked by what appeared to be watchtowers. These fenced-off areas were subdivided by more fences,” Knauff recalled. “I called Ellis Island a concentration camp with steam heat and running water,” she added, borrowing language that the New York Times had used several years earlier when the facility held people of Italian, German and Japanese descent during the war.

Knauff was part of the 10% who got stuck there. After she arrived at Ellis Island, despite her American husband, she was not permitted to continue into the United States.

Immigration officials refused to tell Knauff why she couldn’t leave. They claimed that her presence in the United States threatened national security, but refused to disclose their evidence. Insistent, Knauff fought all the way to the Supreme Court. There she received little sympathy. The justices granted the federal government broad powers to keep people out. “Whatever the procedure authorized by Congress is, it is due process as far as an alien denied entry is concerned,” the court announced in January 1950.

With judicial approval, immigration officials kept Knauff on Ellis Island while she mounted a public-relations campaign. A few times, she won temporary relief from confinement, only to be returned to the island prison months later. In total, Knauff spent almost two years stuck there. Eventually she convinced immigration officials to give her a hearing where she learned why she was so threatening to the United States. Witnesses claimed she was a Communist spy, a powerful accusation in the early years of the Cold War. Under the antiseptic light of transparency, the government’s claims were revealed to be too flimsy to continue confining her. Immigration officials had acted on nothing more than “hearsay, uncorroborated by direct evidence,” the board of immigration appeals concluded. Ellen Knauff finally made her way off the island for good in 1951.

By 1954, just three years later, President Dwight Eisenhower was ready to push immigration law enforcement in a radical new direction. That year, the Eisenhower Administration decided to shut down six immigration detention facilities, including the one on Ellis Island. “Today the little island between the Statue of Liberty and the skyline and piers of New York seems to have served its purpose,” Eisenhower’s attorney general Herbert Brownell announced on Nov. 11, 1954. Instead of operating large immigration prisons, the federal government would make confinement the exception not the rule. As officials decided whether migrants were deportable, they would let people live wherever they wanted, blending into communities. This “is one more step toward humane administration of the Immigration laws,” Brownell continued.

A few days later, the final person held on Ellis Island, Arne Peterssen, left on a ferry heading toward Manhattan. A newspaper report at the time described him as “a Norwegian seaman who had overstayed his shore leave.” The United States government knew that he had entered the country with permission to stay temporarily and it knew that he had not left. Peterssen was as deportable as if he had come to the United States without the government’s permission. Yet immigration officials released him into the bustle of New York City. It remains unclear what happened to him after that. We don’t know if he left the United States, stayed in New York, or headed somewhere else in the country. All we know is that the United States decided that a migrant’s violation of immigration law was no reason to lock him up.

Difficult as it is to believe today, the United States government got remarkably close to abolishing immigration prisons, even with the memories of war still fresh and the Cold War beginning. For the next 25 years, federal policy would not change. If the threat of Soviet military strength and the fevered pitch of Cold War ideological fights wasn’t enough to keep Eisenhower from shutting down immigration prisons, what is stopping us now?

César Cuauhtémoc García Hernández is the author of Migrating to Prison: America’s Obsession with Locking Up Immigrants and an associate professor of law at the University of Denver. 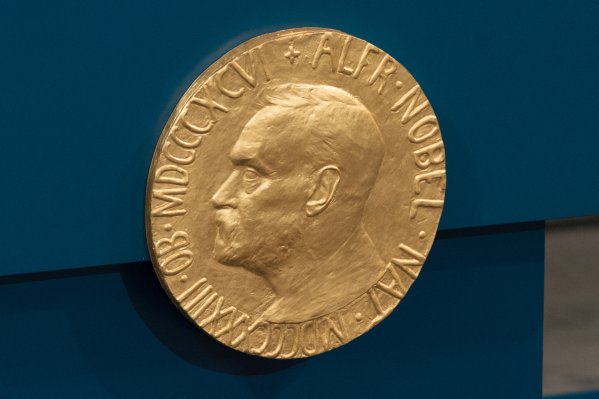 How the Meaning of the Nobel Peace Prize Has Evolved
Next Up: Editor's Pick