Americans Aren’t Supposed to Be Jailed Before Trial Just Because They Can’t Make Bail. But It Happens All the Time

When I was a new lawyer almost 10 years ago, I was at the jail in Montgomery, Ala., one night with a client to prepare for court the next morning. As we discussed what would happen in his case, one of us made a joke, and we both laughed for a few seconds. Then, under his breath, he said, “I don’t think anyone has smiled at me in a couple weeks.”

I have been thinking a lot recently about what his words say about our society.

In the six years before my organization, Civil Rights Corps, filed a constitutional civil rights lawsuit challenging the money bail system in Harris County, Texas, 55 human beings died in the local jail in downtown Houston because they were too poor to buy their release before trial. The American punishment system inflicts unspeakable cruelty every day, both in ways that make it into newspapers and viral videos and in ways that are only whispered about in jail cells late at night.

I have long been interested in the chasm between how the law is written and how the law is lived. An enduring theme of my short career representing directly impacted people is the difference between how we advertise the law with beautiful inscriptions on our public monuments or lofty words in judicial opinions taught in law schools, and how we use the law to crush the bodies and minds of poor people and people of color in our streets, our prisons, and our courtrooms.

One afternoon, not long ago, I was observing a local courtroom in New Orleans. A black man was wearing an orange jumpsuit. He was fully restrained in metal chains as the court heard his case. He stood in between eight or nine other men—eight or nine other black bodies wearing eight or nine other orange jumpsuits bound in eight or nine other sets of chains. I thought of James Baldwin’s letter to Angela Davis as she languished in a jail cell 48 years ago. “Dear Sister,” he began, “one might have hoped that, by this hour, the very sight of chains on black flesh, or the very sight of chains, would be so intolerable a sight for the American people, and so unbearable a memory, that they would themselves spontaneously rise up and strike off the manacles. But, no, they appear to glory in their chains; now, more than ever, they appear to measure their safety in chains and corpses.”

The question before the judge in New Orleans that afternoon was whether the man would be released back to his family before his trial. Because the man was very poor, if the court chose to require him to pay money for his release, he would likely be stuck in a jail cell until his case finished. If the judge released him with nonfinancial conditions of release, then the man could go back to his children, his spouse, his friends, his medical care—to all of the things, large and small, that give everyday life meaning. Because court cases can take a long time, this decision is a vital one. I had recently come across another man, in a different state, who had spent three years in jail on a drug possession charge because he could not pay $500 for his release while he waited for the state to run lab tests on the small amount of alleged drugs that led to his arrest. This is a pervasive problem, because almost half of American households cannot come up with $400 in an emergency.

In a hearing that lasted just a few seconds, the New Orleans judge required the man to pay $20,000 to be released from jail. Because the man could not pay, he would be locked inside the notorious New Orleans jail, which is under a federal consent decree due to the disgusting things that have been done for many years to the human beings who languish there. The court called the next case, and the man sat down. The man next to him stood up.

As a technical legal matter, the judge had done everything wrong. He violated the man’s constitutional rights by jailing him without inquiring whether the man could afford to pay and without making any determination that jailing the presumptively innocent man prior to trial was necessary to serve any compelling government interest. Over 30 years ago, the Supreme Court explained in United States v. Salerno that, “In our society, liberty is the norm, and detention prior to or without trial is the carefully limited exception.” In fact, my organization had just won a lawsuit in New Orleans declaring that, under the U.S. Constitution, the judge was not allowed to do what the judge did because it violates a person’s rights to jail her solely because she cannot make a payment and without the government demonstrating that pretrial detention is absolutely necessary. Nonetheless, the judge did what judges in New Orleans and in over three thousand other cities and counties do every day: ignore the law on pretrial release. The man I saw had just become one of nearly 500,000 human beings to be kept in a jail cell every night in the United States before being convicted of anything, many of them because they cannot pay money bail.

As I left the wood-paneled courtroom and walked up into the gorgeous nave lined with giant glass windows, I thought about how it is inside some of the grandest buildings that our society does some of its worst deeds. I thought about how hard it is to get courts to do what the law requires, especially in a place like New Orleans. After all, in Louisiana, it’s not surprising that the judge would require as many people as possible to pay for their release from jail: the public defender who represented the man, the prosecutor who argued against the man, the sheriff who shackled the man, and the judge who ruled on the man’s case all take a percentage cut of the money if the man pays for his release. If the man’s family could pay the $2,600 that a for-profit bail company requires for a $20,000 bond, then these local officials would get $600 of that payment. (The for-profit company would keep $2,000.) Every year in New Orleans alone, this money amounts to about $250,000 each for the budgets of the public defender, district attorney, and sheriff, and about $1 million for the budget of the court controlled by the local judges. We had just won two federal civil rights lawsuits, in which the federal courts agreed that a Louisiana judge’s financial conflict of interest in collecting this bail money and in collecting a percentage of other fines and fees is unconstitutional. The local judges are currently appealing the two cases.

A few minutes later, I went outside and walked down the steps and across the street. I looked back at the courthouse. On top of the building, stretching for about a hundred feet on the marble façade, was carved this inscription: “The impartial administration of justice is the foundation of liberty.”

Adapted from Usual Cruelty: The Complicity of Lawyers in the Criminal Injustice System by Alec Karakatsanis, available now from The New Press. 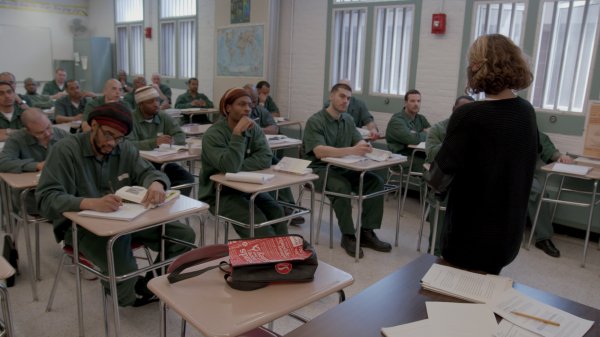 ‘This Is a Story of Hope.’ New Documentary Series College Behind Bars Follows Men and Women Working to Gain College Degrees While in Prison
Next Up: Editor's Pick