Trump's Anti-Abortion and Anti-Immigration Policies May Share a Goal

U.S. President Donald Trump shakes hands with Hungarian Prime Minister Viktor Orban during a meeting in the Oval Office on May 13, 2019 in Washington, DC. President Trump took questions on trade with China, Iran and other topics.
Mark Wilson—Getty Images
Ideas
By Reva Siegel and Duncan Hosie
Reva Siegel is the Nicholas deB. Katzenbach Professor at Yale Law School where she writes on constitutional law.
Duncan Hosie is a second-year student at Yale Law School who researches civil rights and political movements.

As a candidate, Donald Trump promised to restrict abortion and immigration. As President, he has delivered on these promises. He has stacked the federal bench with conservative judges hostile to reproductive rights. He has emboldened states to pass strict abortion laws. Simultaneously, he has initiated sweeping changes to American immigration law and demonized immigrants.

But the President has a growing number of supporters who understand opposition to abortion and immigration as intertwined—as means of preserving a white, Christian America. And the Trump Administration is taking concrete steps to encourage this ideational fusion.

Consider the events of last week. The Trump Administration dispatched officials to the International Conference on Family Policy. There, Trump officials lauded Hungary’s “procreation, not immigration” policies, which oppose refugees and immigration and instead subsidize traditional, nuclear Hungarian families to have more children. These policies coincided with a new Hungarian constitution, which protects fetal life from the moment of conception.

Joe Grogan, an assistant to the president and director of the Domestic Policy Council, praised Hungary for the “courage and creativity” of these policies and said the Trump Administration was “inspired” and came “in support and solidarity.” He took the occasion of celebrating Hungary’s fertility-boosting programs to affirm the Administration’s opposition to abortion.

Hungary’s “procreation, not immigration” policies have their roots in “replacement theory.” This doctrine holds that white women are not producing enough babies and Christian, western civilizations will be “replaced” through the twin forces of falling birth rates and increasing immigration. Hungarian Prime Minister Viktor Orbán, for example, has argued that “there are political forces in Europe who want a replacement of population” and has vowed to fight those who want “an exchange of populations, to replace the population of Europeans with others.”

Orbán was once a rare world leader to explicitly engage in this demographic discourse. Not anymore.

Many were shocked when Trump defended the white supremacists who marched in Charlottesville while chanting “you will not replace us.” Fewer commented on his remarks this year, when Trump told the U.N. that the “free world must embrace its national foundations … not attempt to erase them or replace them.” As President, Trump has ominously tweeted that “we don’t want what is happening with immigration in Europe to happen with us!” and denounced an ostensible immigrant “invasion” of America. And he’s appointed aides on the far-right of immigration policy like former chief strategist Steve Bannon and senior adviser Stephen Miller, as well as aides who have dabbled in replacement talk. Miller, the President’s chief immigration adviser, has recommended articles on white nationalist websites at the forefront of disseminating “replacement theory.”

The International Conference on Family Policy was not a one-off. In March, White House officials, Republican members of Congress and evangelical leaders attended the “Make Families Great Again” conference at the Library of Congress. Hosted by the Hungarian Embassy, the event focused on Hungary’s policy response to the decline of its birth rate below replacement level and promoted Orbán’s “Family Protection Action Plan.” Speakers at the event exhorted women to have more babies. Prominent conference attendees included Valerie Huber, a U.S. Health and Human Services (HHS) official and prominent advocate of abstinence-only education; Mercedes Schlapp, then White House Director of Strategic Communications; Sebastian Gorka, a former deputy assistant to President Trump; and Tony Perkins, the president of the Family Research Council.

Also in March, Trump’s HHS awarded $5.1 million in Title X family-planning funds to Obria, an organization that subsidizes crisis pregnancy centers, refuses to provide or refer for abortion or contraception and aims to be the pro-life “led by God” alternative to Planned Parenthood. In 2015, Obria’s founder and current chief executive explained, “When [Europe’s] nations accepted contraception and abortion, they stopped replacing their population. Christianity began to die out. And, with Europeans having no children, immigrant Muslims came in to replace them, and now the culture of Europe is changing.” She warned that America is “on the same track as Europe” and that “[i]n only two of the past 40 years have we replaced our population.” The New York Times has reported on regulatory changes initiated by HHS that “make it easier to provide money to faith-based organizations like Obria.” Mother Jones suggested that “Obria may represent the future of the Title X program” under Trump.

Most troubling, certain Republican members of Congress seem to be embracing this fusion of abortion and immigration, which suggests this ideational framework will outlast the Administration. Congressman Andy Harris (R-Md.), a staunch pro-life advocate, told the International Conference on Family Policy that “civilizations actually can become extinct” without “an adequate replacement.” He warned that the American birth rate has fallen “below replacement birth rate” and called for preserving the American “culture of civilization” through more births, not immigration. He added that the United States should craft policies that recognize the benefits of the “presence of a man in the family.” Congressman Steve King (R-Iowa) believes, in his words, that “cultural suicide by demographic transformation must end.” He told a right-wing Austrian website that “if we continue to abort our babies and import a replacement for them in the form of young violent men, we are supplanting our culture, our civilization.”

Replacement theory, of course, is not new in American political culture and history. The doctors who led the Civil War-era campaign to enact laws criminalizing abortion warned that “native born” Americans were not bearing children at the same rate as immigrant families. Dr. Horatio Storer, the leader of the physicians’ campaign to criminalize abortion, asked whether America would “be filled by our own children or by those of aliens? This is a question our women must answer; upon their loins depends the future destiny of the nation.”

Now, about 150 years later, the Administration is yoking “family values” to openly nationalist and racialized demographic anxieties that Trump himself invokes – a move that seems to appeal to his loyalists. We observe, for instance, that white evangelical Protestants are among the strongest supporters of Trump’s plan to build a wall along the U.S. border with Mexico. While some pro-life organizations joined religious leaders in opposing the Administration’s treatment of immigrant children at the border, other pro-life organizations were conspicuously silent, or even supported, Trump’s family-separation policies. For some growing number of Americans, two seemingly disparate goals of restricting abortion and immigration are beginning to align as serving convergent ends.

President Trump’s critics have described the “Make America Great Again” movement as unprincipled and unsystematic—a transactional vehicle for winning spoils, from conservative judges to tax cuts to deregulation. Yet we are witnessing the emergence of a disturbing internal logic in Trump’s agenda. Trump, of course, has not yet built a wall between the United States and Mexico. But he’s helped build something far more durable: a bridge between abortion and immigration restriction that is infusing pro-family advocates with the energies of nationalism.

These advocates talk about protecting life—but care whose life is saved. 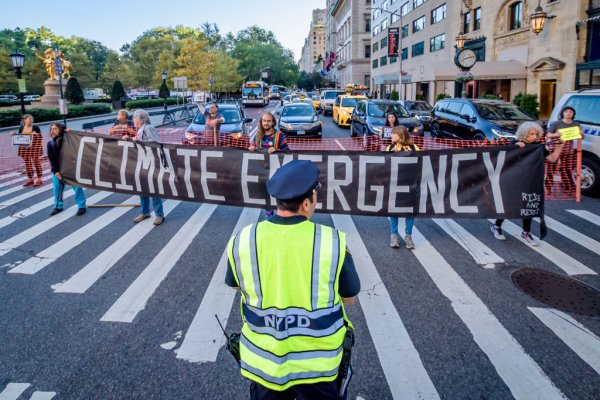 Protests in the Trump Era Have Been Mostly Peaceful. Here's How the 2020 Election Could Change That
Next Up: Editor's Pick