All Americans Bear the Blame for the Failed Afghanistan War

Medevac crew members prepare to evacuate a wounded Marine in Helmand province in 2010
James Nachtwey for TIME
Ideas
By Elliot Ackerman
Ackerman is the author of the novel Red Dress in Black and White and the memoir Places and Names: On War, Revolution, and Returning, as well as three other novels. He served five tours of duty in Iraq and Afghanistan, received the Silver Star, the Bronze Star for Valor, and the Purple Heart.

In New York Times Co. vs. United States, the landmark 1971 case which permitted the publication of the Pentagon Papers, Supreme Court Justice Hugo Black in his majority opinion wrote, “Only a free and unrestrained press can effectively expose deception in government. And paramount among the responsibilities of a free press is the duty to prevent any part of the government from deceiving the people and sending them off to distant lands to die . . .” On Monday, after a contested legal proceeding, the Washington Post released “The Afghanistan Papers: A Secret History of the War”, a trove of hundreds of unpublished interviews on the prosecution of the conflict with senior level officials conducted by the Special Inspector General for Afghanistan Reconstruction (SIGAR).

As negotiations with the Taliban resume, could the Afghanistan Papers have a similar galvanizing effect as the Pentagon Papers, which sped the conclusion of the Vietnam war? This seems to be the imperative behind their release and Craig Whitlock, the investigative journalist responsible for the reporting, wrote, “The specter of Vietnam has hovered over Afghanistan from the start.”

Parallels certainly exist between the two wars. The U.S.-backed governments in both countries suffered from endemic corruption. Our adversaries have enjoyed a sanctuary next door (Cambodia and Laos in Vietnam, Pakistan in Afghanistan). The drug trade exploded in each country as a result of the war. Most profoundly, in Afghanistan as in Vietnam, we have disastrously misunderstood the objectives of our adversaries. For the Vietcong and North Vietnamese, the war was one of national liberation while we Americans associated it with Domino Theory and transnational communism. For the Taliban, the war has also been one of national liberation, in which a key objective is the expulsion of foreigners from Afghanistan, while we Americans continue to associate it with transnational terrorism and al-Qaeda, which for years hasn’t had a significant presence in the country.

The Afghanistan Papers effectively catalogue the deeply dysfunctional nature of the war, from its continuously flawed strategy to its bungled execution. Upon release of the papers, certain members of Congress noisily expressed their outrage, as though learning for the first time of our history of failed policies in Afghanistan. This included Senator Richard Blumenthal, a Vietnam-era veteran, who sits on the Senate Armed Services Committee. He took to Twitter, immediately calling for hearings and writing, “We must end the vicious, lethal cycle of misinformation & unspecified, unsupported strategies.”

With the war well into its second decade, such sudden indignation rings a bit hollow. Did we, the American people, really need an elaborate unearthing of thousands of previously classified documents to tell us that our efforts in Afghanistan aren’t going well? Anyone paying the slightest modicum of attention to the war can see how it has festered on for eighteen years—that number alone tells you it’s been a disastrous undertaking. As does this number: 2,401 American dead. As well as a bill that comes to over $2 trillion. The Washington Post opens its story with the following, “A confidential trove of government documents . . . reveals that senior U.S. officials failed to tell the truth about the war in Afghanistan throughout the 18-year campaign, making rosy pronouncements they knew to be false and hiding unmistakable evidence the war had become unwinnable.”

Inherent in this statement is the logic that the American people were misled and because they were misled they gave three successive administrations their consent to continue prosecuting the war. What is unspoken in this logic is that if the American people knew how poorly the war was going they would’ve mobilized to end it, much as they eventually mobilized to end the Vietnam war. That mobilization hasn’t come for Afghanistan. This isn’t because of a lack of “truth” or “facts”. It is because of a lack of interest.

Policy makers and military professionals certainly deserve some of the blame for the quagmire in Afghanistan. However, the people who are most to blame for Afghanistan aren’t these functionaries. It is we, the American people, who appoint our representatives and fund our military with taxes, who are the ultimate masters of our societal successes and failures.

In the lead up to the 2018 mid-term elections, 42 percent of us didn’t even know whether or not we were still at war in Afghanistan. We fight multiple conflicts around the globe, but we pay no war tax and place those costs into our national deficit, having chosen to pass them along to future generations. Simultaneously, we unquestioningly outsource our national defense to a military caste, largely recruited from the same regions and increasingly from the same families, who bear the burden of these muddled conflicts. Is it a coincidence that in our history the wars we’ve decisively won—such as the Civil War, and First and Second World Wars— were largely fought by citizen soldiers, who would never abide our cyclical quagmires in Iraq, Syria, Somalia, Yemen, and, of course, Afghanistan.

The first part of the Washington Post’s series is headlined, “At War With the Truth”. However, it doesn’t tell us who, exactly, is at war with the truth. The inference seems to be that it is “the government”, which as Justice Black wrote in his opinion “a free and unrestrained press can effectively expose”. But what if it’s not the government. What if it goes deeper than that? What if it’s us, we the people, who after eighteen years of war still lack the resolve to look in the mirror and ask ourselves how we got here and whether we’re willing to change so that it never happens again. The free press can expose government duplicity, as it has in the past. But what about our societal duplicity. Who will expose that? 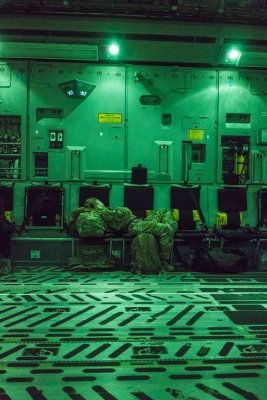 Will Trump Close the Deal to End Afghanistan's Long War?
Next Up: Editor's Pick