Behind the Scenes of TIME's 2019 Person of the Year Issue

Person of the Year started on a whim. At the end of 1927, the editors realized they had made it through the year without putting the 25-year-old aviator Charles Lindbergh on the cover to commemorate his historic solo flight that May across the Atlantic. The solution was to make him “Man of the Year,” launching what has become one of the most enduring franchises in journalism. Lindbergh was not only the first but until now also the youngest individual to be named TIME Person of the Year.

This year we name 16-year-old Greta Thunberg, who—via seemingly every mode of transportation except ­Lindbergh’s—journeyed around the globe while leading a movement to protect it. Of course, the power of youth is hardly a new theme: in 1966, TIME chose an entire generation, people under 25, as Person of the Year. “In the closing third of the 20th century, that generation looms larger than all the exponential promises of science or technology: it will soon be the majority in charge,” the editors wrote.

For our team, a joy of working on Person of the Year is the opportunity to look at the year through the prism of the people who shaped it. The formal process begins in early fall with a meeting where staff from all over the world make recommendations. We then launch numerous projects that could become the choice, led by teams of reporters and editors who themselves don’t know the choice until the end.

TIME has been on our own journey this year, setting up as an independent company with supportive new owners, Marc and Lynne Benioff; adding new franchises and events; growing our team; and deepening the ambition of our coverage.

We are also expanding Person of the Year to reflect the full range of subjects that TIME covers. For the first time, we’re choosing the most influential person in a range of fields: Bob Iger, the meticulous CEO who is rewriting Disney’s story with blockbuster deals, is our Businessperson of the Year. The U.S. women’s soccer team, who inspired millions with their play on the field and their persistence off of it, is the 2019 Athlete of the Year. And our Entertainer of the Year is the irrepressible performer Lizzo, nominated for eight Grammys this year, whose message of positivity captured the culture.

There is one other category this year that is special to us at TIME. Last year for Person of the Year, we chose “The Guardians,” four journalists and one news organization who took great risks in pursuit of greater truths, standing up for free expression and democratic values. This year, we are recognizing a different group of Guardians, who took to the stand and risked their careers in the defense of the rule of law. That project, led by TIME’s Massimo Calabresi and Vera Bergengruen in Washington and Simon Shuster reporting from Kyiv, provides one of the most detailed accounts to date of the nonpartisan public servants who exposed the evidence that prompted the impeachment of a President.

Our reporting on Greta Thunberg this year actually kicked off well before we had begun to think about Person of the Year, when Suyin Haynes journeyed with her over 1,200 miles by train for a profile in our Next Generation Leaders series. For this project, Suyin rode with Thunberg again as she headed to the Madrid conference on climate change. “Compared to when I traveled with her across Europe in the spring,” says Suyin, it was “a complete frenzy.” The resulting story, written by Suyin, Justin Worland and Charlotte Alter and edited by Haley Sweetland Edwards, is a remarkable portrait of what influence looks like in 2019.

“Despite the dire urgency of her message, there is optimism at the heart of this year’s choice,” says executive editor Ben Goldberger, who oversees Person of the Year. “To a generation let down by traditional power structures, Thunberg’s selection shows that you don’t need to be part of them to shape history.”

Perhaps it’s fitting that in his final years, Lindbergh became an environmentalist. “If I had to choose,” he said, “I would rather have birds than airplanes.” 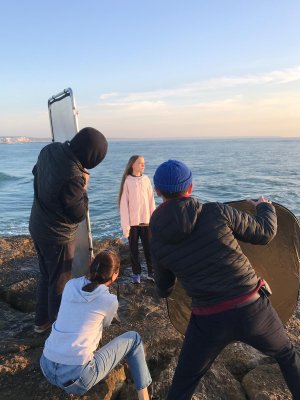 The Story Behind TIME's 2019 Person of the Year Cover
Next Up: Editor's Pick