Making a list of the decade’s most important and influential gadgets is, in a word, illuminating — and that’s before you factor in all the LEDs. Over the last 10 years, thousands of products have been released, and while some are definitely “cooler” than others, their impact on the past decade, and the decade to come, is by no means identical.

Each gadget tells the story of a new way of thinking, a slow-moving paradigm shift set to change the way we approach the personal technology we interact with on a daily basis. Sure, you might not know what a Raspberry Pi is, but its impact on industries like robotics and home automation has been massive. Unfamiliar with the Adaptive Controller? That’s OK! But the elegantly executed idea has opened up a world of delight for gamers with disabilities. Think drones are just for shooting vacation footage? Think again — and watch your head.

Technology exists to augment the human condition, to make people smarter, better, and ultimately, more human. From smartphones and drones to consoles and cars, the past decade has more than enough life-changing devices to choose from. Here are TIME’s picks for the most important gadgets of the decade.

Before the iPad’s introduction in 2010, the idea of a “tablet computer” was mostly relegated to slick science fiction movies and unwieldy laptop-adjacent monstrosities running terrible software. Apple’s iPad — like the iPhone before it — resulted in a cultural shift for personal computing, and set the tone for the next decade of portable devices. Its impressive multitouch display, complete abandonment of physical keys, and gargantuan selection of software and media created a perfect storm of entertainment that everyone could get on board with. And while competitors have had ample time to make laptops or detachable two-in-one computers to attack the iPad’s biggest pain points, Apple has continuously advanced the platform’s iPadOS and hardware (Apple Pencil, anyone?), making any nerd optimistic about the next decade of tablet computing.

Think cars can’t be gadgets? Then you haven’t driven a Tesla Model S — or watched one drive up to you. The electric sedan has slowly reshaped the trajectory of the automotive industry, forcing competitors to embrace a battery-powered future instead of the gas-guzzling present, and challenging the belief that electric cars can’t be cool. Features like downloadable software updates, a huge touchscreen display and advanced autopilot capabilities make it feel like a vehicle from 2022 instead of 2012. Think of the Tesla Model S as the iPod of cars — if your iPod could do zero to 60 in 2.3 seconds.

At first glance, the Raspberry Pi looks more like a component that fell off the space station. But take a closer look at the miniature Linux computer, originally made for promoting coding in schools, and you’ll find a wide-ranging community in love with the blank slate it provides. To get started you’ll need a keyboard, mouse, and monitor. But once you’re plugged in, the possibilities are endless. Since its debut, a vibrant DIY ecosystem has sprung up around the Raspberry Pi, making it the go-to gadget for tinkerers, engineers, and that one relative you always call whenever your Wi-Fi is on the fritz. Sure, you can use it to learn to code, but it’s got the range to handle everything from robotics and home automation to entertainment. Makers and accessory manufacturers have turned the tiny boxes into everything your budding engineer brain can think of: weather stations, retro game consoles, smart speakers, cloud servers, the whole nine yards. After seven years on the market, and with over 25 million units sold, the Raspberry Pi is a tinkerer’s dream come true.

Google’s Chromecast, released in 2013, made it dead simple to beam media from your laptop or smartphone to your TV, helping popularize the very concept of streaming. It bridged the gap for people who wanted a piece of the future without investing in a pricey smart TV, or spending over a hundred bucks on some expensive and gaudy streaming box. At $35, Chromecast democratized streaming while giving users an integral piece of smart home connectivity for cheap. Now, the platform is capable of streaming more than media; Google’s added support for its game-streaming Stadia service to its more powerful Chromecast Ultra devices. It might not be an essential piece of technology in the decade to come, but the Chromecast’s influence on streaming media can’t be understated.

While you might hear a drone before you see it, chances are you’ll be pleasantly surprised by what it sees, and how cool the view is a few hundred feet in the air. And of all the footage-capturing drones around, DJI’s Phantom is the most recognizable — and the most popular drone on YouTube. Its signature all-white design makes it hard to miss, and the company’s dedication to making drone piloting as simple as possible has made the Phantom an easy choice for beginning pilots, and a satisfying tool for aerial photography. And this is only the beginning. There’s already a professional drone racing league, and with companies betting on drones to handle everything from shipping goods to construction to surveillance, you’re bound to interact with more than a few in the decade to come.

Talking to yourself is still a little odd, but talking to your voice assistant has become a common activity in homes worldwide thanks to Amazon’s Alexa, the voice assistant built into its Echo devices and other smart home gadgets. Voice assistants are the new kid on the block, ideal for managing your smart home devices, handling media playback or quickly communicating with friends and family. Amazon’s Echo smart speaker and Alexa voice assistant is one of the most popular, with over 100 million Alexa-enabled devices sold as of 2019. As the first of its kind, Alexa blazed a trail for the multiple competitors trying to sell you on their own voice assistants to varying degrees of success. While convenient, though, the proliferation of devices like the Echo has spurred controversy surrounding the data collection practices of smart device manufacturers, becoming one of the most high-profile privacy issues of our time.

While many have tried, no one has been able to match the polish and performance of the Apple Watch, which set the standard for what a smartwatch could do. Since its introduction in 2015, it’s gone from a device for early adopters and fashion-deficient nerds to a mainstream accessory, thanks to its smart software and ever-improving hardware. And as the Apple Watch expands its health-oriented features, it could become the easiest way to keep your health on track and your day on schedule.

Like the iconic iPod before it, Apple’s AirPods have captured the hearts, minds and ears of music lovers looking to jam to some tunes. First released in 2016, AirPods quickly became an icon in their own right, both for their aesthetic appeal as well as their larger cultural impact. But widespread adoption hasn’t come without criticism. Its controversial manufacturing methods make disposal and recycling difficult, and could alter how we think about the future of our gadgets once we’re done with them. AirPods even carry social significance thanks to the glut classist jokes and memes spread across social media, transforming them into earbuds that double as a not-so-subtle status indicator. However, their cutting-edge hardware and software evolved further in this year’s AirPods Pro, and helped cement them as the gold standard of truly wireless audio for music fans.

When it comes to gaming on the go, no one can top Nintendo’s track record, beginning with the humble Game Boy in 1989. But the introduction of its hybrid Nintendo Switch in 2017 — which you can play either portably or connected to your TV — might be the company’s most important contribution to gaming yet. Compared to the competition, it handily takes the crown as the most important video game console of the decade, with fans begging developers to bring their next title to the Switch. Its smartphone-inspired portability, paired with Nintendo’s ever-growing library of blockbuster, independent and vintage titles, makes the Switch feel like the culmination of Nintendo’s idea of what gaming should be.

Microsoft’s Xbox Adaptive Controller, made for gamers with limited mobility and highly modifiable for different users’ needs, is perhaps my favorite gadget of the decade, and one I pray is duplicated by other major game companies. Not only does it look slick, it’s designed to accommodate a subset of gamers long ignored by the larger gaming industry. Microsoft worked alongside organizations like the Cerebral Palsy Foundation and the AbleGamers Charity to shape everything from the huge buttons on its face to its accessible packaging. With over a dozen ports for connecting assistive controllers, buttons and joysticks, and its compatibility with both Xbox One consoles and Windows PCs, Xbox’s Adaptive Controller is one of the most important developments in the gaming industry, and should put a smile on anyone’s face. 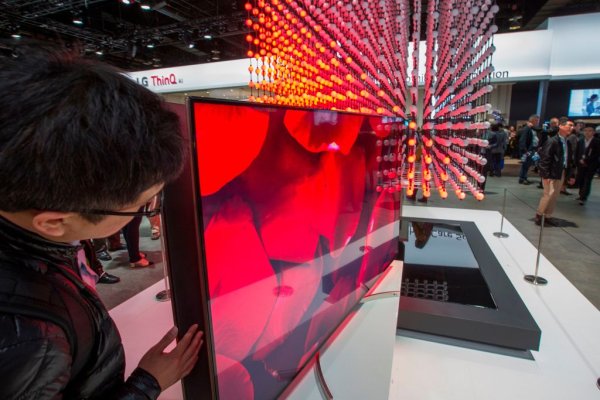 Buying a 4K TV? Here’s What to Know
Next Up: Editor's Pick