Colonel Meow, the Guinness World Record holder for cat with the longest fur, died Wednesday, and the Internet is paw-sitively heartbroken. He was 2 years old.

While the cause of death is unknown, the Himalayan-Persian mix reportedly suffered heart problems in November. His YouTube channel posted this mew-ving tribute:

Fans wept when they heard the news and wished him “Catspeed,” according to his Facebook page — which boasts more than 355,000 “likes.” Internet celebrity cats have extended their condolences; in a statement to Mashable, Lil Bub hailed him as one of the most “impressive and regal living creatures” she had ever met, while Grumpy Cat declared a “grumpy day”:

Born in 2011, Colonel Meow was rescued by the Seattle Himalayan and Persian Society and adopted at Petco by his owner, “Master” Anne Marie Avey. He became an Internet sensation in fall 2012 after his Facebook page and Twitter hashtag “#spreadthefrown” went viral, thanks in part to publicity from The Daily What, an Internet memes website.

Between his long fur and his long face, he was known as the world’s angriest cat and was imagined to be a fierce leader on a quest for world domination. His fans are called “minions.” In fact, during a visit to BuzzFeed, he immediately assumed control of the office and appointed himself CEO.

But his celebrity peaked in August 2013, when he was awarded the Guinness World Record for cat with longest fur, which measures about nine inches and is brushed up to three times a day.

During his two years of life, Colonel Meow enjoyed walks on a leash, drinking scotch (especially Johnnie Walker Black Label), trolling other Internet celebrity animals, staring at things until he fell asleep, and having his butt scratched. 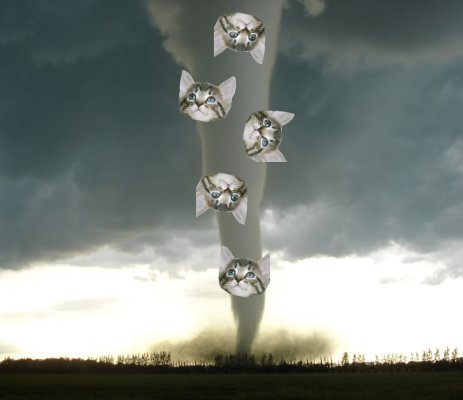 ALERT: CATNADO
Next Up: Editor's Pick