Children play football at the J-Village during a media tour in Naraha, Fukushima prefecture on Aug. 2, 2019.
CHARLY TRIBALLEAU—AFP/Getty Images
By Aya Takada and Stephen Stapczynski / Bloomberg

Tepco cleaned a tainted area in Fukushima prefecture on Tuesday after it conducted its own survey and found that the radiation level there exceeded the government-set tolerance level of 0.23 microsieverts per hour, Shiraki said. Humans on average are exposed to 2,400 microsieverts of radiation annually, according to Japan’s Ministry of the Environment.

“We are checking why the radiation level in the area was so high,” Shiraki said by telephone Wednesday. The tainted soil was moved to the cleanup site at the Fukushima Dai-Ni nuclear plant.

Radiation levels around J-Village sports training center in the town of Naraha in Fukushima were as high as 71 microsieverts per hour at surface level, according to the survey done by Greenpeace Japan.

“The report alarmed the Japanese authorities enough that they checked it, confirmed the data, and got the hotspot cleared up,” Andrew DeWit, a professor at Rikkyo University in Tokyo said in an email.

J-Village, built by Tepco opened in 1997, was Japan’s first national training center for soccer. It is located about 20 kilometers (12 miles) from Tepco’s Fukushima Dai-Ichi nuclear plant, which suffered one of the world’s worst nuclear accidents after Japan’s northeast coast was devastated by an earthquake and tsunami in 2011.

J-Village was used for about seven years as a staging area for workers cleaning up the crippled nuclear plant. It has since re-opened as a sports facility, where it was used as a training ground for the Rugby World Cup this year. According to a monitor placed near the facilities headquarters, radiation levels were 0.111 microsieverts per hour on Wednesday afternoon.

Cleanup of Naraha after the 2011 nuclear disaster was completed in March 2014, paving the way for evacuees to return, according to Kishiko Yokoyama, deputy counselor at Japan’s Ministry of the Environment.

“We are waiting for the result of Tepco’s investigation into this case,“ Yokoyama said. The ministry may take additional measures if necessary, she said. 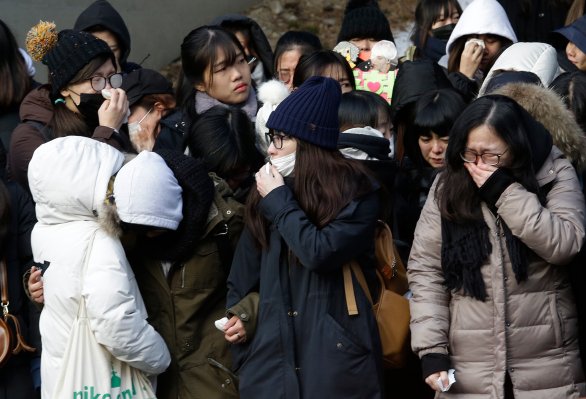 Actor Cha In-ha's Death Is the Latest K-Pop Tragedy
Next Up: Editor's Pick