11 People Injured After a Shooting Near New Orleans' French Quarter

A shooting in New Orleans early Sunday morning has left 11 people injured. Two of the victims are in critical condition, the New Orleans Police Department said in a statement.

Officers near the 700 block of Canal Street, just south of the city’s famed French Quarter, reported hearing gunfire just before 3:30 a.m. Once they arrived, they found many people shot, according to the statement.

Police initially reported that 10 people were injured but then updated the total number of victims in the incident to 11, noting that one individual “walked in at a local hospital for treatment.” The other 10 “were transported to local medical facilities for treatment,” police said. No law enforcement officers were injured in the incident, the agency noted.

Authorities said on Sunday morning that one person was “detained near the scene” but that “no arrests have been made at this time.”

Superintendent for the New Orleans Police Department, Shaun Ferguson, called the incident a “cowardly and senseless act” in a press release announcing that the agency would “not stop” investigating until they “identify and arrest those responsible.” The New Orleans Police Department previously said they are continuing to investigate the incident and are being helped by Louisiana State Police and federal officers.

“To the victims – you are in our thoughts and prayers, and we will work tirelessly to bring those behind this cowardly act to justice,” Ferguson said. “That is a promise.”

The press release also announced a reward of up to $5,000 for anyone who comes forward with information leading to an arrest.

New Orleans Mayor LaToya Cantrell praised police officers for their “instant and efficient response” to the shooting, which she said was an “ugly disruption of an otherwise beautiful holiday weekend.” 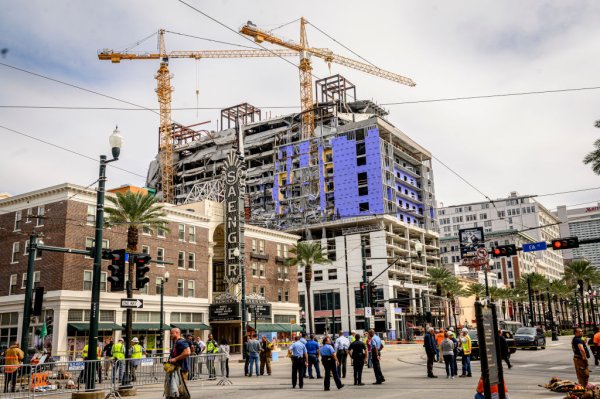