How to Make Congress Work Better for the American People

Every few decades, Congress comes to the realization that it needs to fix itself. For the last 50 years, whether due to an imminent crisis or a slow deterioration, special reform committees have been established to deliver reforms on everything from committee operations to congressional ethics. These committees were tasked to diagnose the problems facing the legislative branch and prescribe solutions to make congress more effective. Some ideas worked, some didn’t, and others were put on the shelf and only utilized years later.

The problems today are plain for all to see. Less than 20% of Americans approve of the job that Congress is doing. A witness at a recent hearing testified that only 27 percent of U.S. Senators and 16 percent of U.S. Representatives have been in office long enough to have seen the federal funding process work as intended. Earlier this year, a former Member of Congress shared that “the current system encourages good members to leave, just as they are gaining the needed experience to be effective.” Partisanship is up, civility is down. Technology is rapidly changing our world, and Congress has struggled to keep up.

That’s where the Select Committee on the Modernization of Congress comes in.

In a nearly unanimous vote in January 2019, the U.S. House of Representatives established this Committee and tasked it with researching and offering solutions to what ails the legislative branch. This includes a wide range of issues, from improving technology and increasing transparency, to budget and spending reforms and exploring a different congressional calendar. The scope is massive. The mission is vital to the future of our government and our nation.

The guiding principle for what this Committee researches and prescribes is simple: make Congress work better for the American people.

To have any chance to succeed, as leaders of this Committee, we knew the committee would require a totally new approach. For starters, the Committee has an equal number of Democratic and Republican Members, six each. The Committee established a unified, nonpartisan staff with one budget and one office, breaking with the tradition of dividing resources between parties. The Committee also instituted a new process centered around passing recommendations on a rolling basis throughout the year, giving focus to particular issues and building broad bipartisan consensus as we move along. This is in contrast to providing one massive, catch-all report at the end of the year. The Committee has even tried to tweak the small things as well, such as mixing up the seating at public hearings so that members behind the dais aren’t divided by political party.

These recommendations have focused on a few specific areas: “opening up” Congress to make congressional operations and legislative updates more accessible and understandable for the American people; improving the way Members of Congress can communicate and connect with their constituents through social media, direct mail and new emerging technologies; increasing staff retention on Capitol Hill so that the institution is better able to solve tough problems (and be less reliant on lobbyists); ensuring Americans with disabilities have access to all procedures and functions of the House, and; overhauling the current onboarding and education processes for new and current Members of Congress. That’s just the start.

Earlier this fall, the Committee held a hearing to explore recommendations for promoting civility and encouraging more collaboration in Congress. Members and witnesses discussed establishing an annual bipartisan retreat, considering bipartisan seating on the House floor and in committee hearings, and adjusting the congressional schedule so that Members have more time to spend engaging in policy deliberations and building bipartisan relationships. The goal is to identify areas where Members from both sides of the aisle can sit down together, engage in tough discussions, and ultimately deliver bipartisan solutions on behalf of the country. As a witness in one of our recent hearings said, “If we want a functional democracy, we must spend less time lamenting our divisions and focus our attention on practical opportunities to strengthen our deliberative institutions.” We certainly won’t agree on everything, but we should be encouraged to move forward on areas of common ground.

The rule that created the Select Committee originally had it set to expire on February 1, 2020. On November 14, 2019, the House voted to extend the Select Committee’s mission and work through the remainder of the 116th Congress. We plan to use this next year building on the nearly 30 recommendations we’ve passed, while identifying new areas and opportunities for reform throughout Congress. No idea for reform is too big or too small, and Congress has a long way to go.

Just as its predecessors did, the Committee is providing a roadmap that current and future Congresses can use to fix both minor and major issues that arise, hopefully with more frequency. We’ve decided that the boat moves best when all oars are in the water rowing in the same direction. The Committee welcomes ideas from anybody that might have them. Pick up an oar and help us paddle towards solutions so we can have a Congress that works better for the American people.

You can learn more at about the Select Committee here. 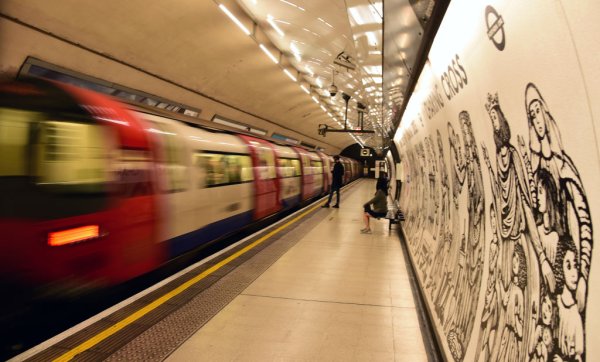 A Muslim Woman Went Viral for Confronting Anti-Semitism on the London Underground. Her Actions Hold a Lesson for Us All
Next Up: Editor's Pick