A New Wildfire Is Threatening Southern California at Thanksgiving. Here's What to Know

A new wildfire has been blazing near Santa Barbara ahead of the Thanksgiving holiday.

The Cave Fire quickly burned through 4,367 acres since it started Monday afternoon—and it remains 20% contained as of Wednesday morning, according to Cal Fire, one of the lead agencies overseeing the fire. Approximately 600 firefighters have been assigned and evacuation orders were issued for more than 2,280 residents, while still other areas are under evacuation warning. All evacuation orders were officially lifted Wednesday morning, Santa Barbara County announced. “With good progress on the fire fight, repopulation plans are being evaluated and all should be in their homes later today and in time for Thanksgiving,” the county said in a Tweet.

But on Tuesday evening, Santa Barbara County Sheriff’s Office had issued an additional evacuation warning in some locations due to the potential for debris flow as the result of a storm that struck Tuesday night and is expected to carry on into Wednesday.

It comes less than a month after the Kinkade Fire burned more than 77,758 acres in Sonoma County, Calif. and the Maria Fire burned through nearly 2,000 acres of Southern California.

Los Padres National Forest fire chief Jimmy Harris told reporters Tuesday afternoon that firefighters are working in some of the toughest conditions in the world. “It’s just a hard, difficult piece of country to fight fire in,” he said.

Santa Barbara officials declared a local emergency on Monday evening. “The Cave Fire is causing conditions of extreme peril to the safety of persons and property within Santa Barbara County,” wrote the officials in a public statement released early Tuesday morning. “These conditions are beyond the control of the services, personnel, equipment and facilities of the combined forces of the county’s Operational Area to combat. Additional resources have been ordered from out of the area, which have been arriving all evening.”

Meanwhile, an additional fire in Northern California’s Yolo County is mostly contained as of Tuesday afternoon. Here’s what to know about the wildfires still raging in California.

The Cave wildfire began around 4 p.m. Monday off Highway 154 in the Santa Ynez Mountains several miles north of Santa Barbara, and officials warned early Tuesday that the fire was advancing toward heavily populated areas including Santa Barbara and Goleta.

Santa Barbara Sheriff Bill Brown told reporters on Tuesday that as of that afternoon, 2,284 residents had been contacted by the Santa Barbara Sheriff’s Department and told to evacuate. Brown added that more than 1,300 had already evacuated on their own, but about 300 indicated they would not be evacuating. In total, the department estimates more than 5,400 people had abandoned the area.

County officials said no residential homes have been damaged so far, but one outpost building has been destroyed. No injuries have been reported.

The fire threatened power lines, and power outages have been reported that are not related to precautionary power shut offs by Southern California Edison, the region’s power supplier, according to the county.

On Tuesday, Santa Barbara Air Pollution and Control issued an air quality warning for the county, urging people to stay indoors and close their doors and windows.

The Cashe wildfire in northern California near Woodland, northwest of Sacramento, was nearly 100% contained as of Tuesday afternoon, a spokesperson for Yolo County tells TIME in a statement. The spokesperson did not immediately provide the official acreage burned during the fire.

The Woodland Fire Department shared on Facebook that local agencies are currently fighting an additional fire that has burned 60 acres, but added “currently there are no threats to structures, although drivers on I-5 may experience smoky conditions.” 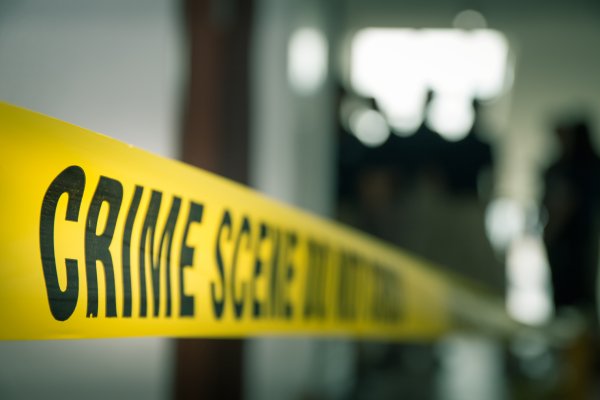