Live TV Has Always Been a Tool for Activism. But Gen Z Is Using It in a New Way

The 2019 American Music Awards were supposed to be Taylor Swift’s night. Along with scooping up a record number of awards—including artist of the year, favorite pop/rock album and favorite music video—at Sunday’s ceremony, she was named artist of the decade and performed an extended medley of her hits featuring appearances by Camila Cabello, Halsey and Misty Copeland. Yet it was 17-year-old gloom-pop phenom Billie Eilish who kept popping up in my social feeds throughout the evening, mostly in the form of screenshots from her performance during the telecast. With a burning urban landscape as her backdrop, Eilish sang her recent single “all the good girls go to hell” wearing a T-shirt that read: “No Music on a Dead Planet.”

She didn’t invent the slogan; for a while now, it’s been a rallying cry among musicians fighting climate change. But Eilish put it in front of millions of viewers watching the AMAs live across the country—and many more around the world who saw images or brief videos of her T-shirt on social media. In just six words spelled out in red sequins, the AMAs’ best new artist winner interrupted the music industry’s regularly scheduled celebration with a reminder that, as Earth misses benchmark after benchmark in the fight against global warming, she and her peers don’t have the luxury of losing themselves in carefree revelry. The climate crisis keeps even the richest, most successful members of Generation Z awake at night. How could it not?

Eilish’s performance was, in fact, the second time this past weekend that young environmental activists hijacked mass media to draw attention to what has becoming the defining issue of their generation. At Saturday’s Harvard-Yale football game, a longstanding annual tradition and the rare Ivy League sporting event that commands national attention, dozens of protesters representing both universities rushed onto the field during halftime. Some held a giant banner bearing the words: “Nobody Wins. Yale & Harvard Are Complicit in Climate Injustice.” Some stayed on the field, delaying the game, for long enough to get arrested. One of the demonstration’s organizers, Harvard student Caleb Schwartz, told ESPN that it had been months in the making. “This is a very deliberate choice of targeting this specific [game] to get our action out there,” Schwartz said.

What’s remarkable about both Eilish at the AMAs and especially the Harvard-Yale protest—which aired on ESPNU to a significantly smaller audience than the AMAs—is how quickly and widely their messages spread. I didn’t tune in to either live broadcast, but I encountered both Eilish’s shirt and the student activists’ banner on my social platform of choice (or possibly addiction), Twitter, within 10 minutes of each appearing on TV. Mainstream news coverage followed soon after, but not before the musician and the Ivy Leaguers had had a chance to state their unfiltered grievances to an audience that extended far beyond whoever happened to be watching television at the moment when they chose to make their stands.

Obviously, neither Eilish nor the Harvard and Yale groups were the first members of Gen Z to speak out on climate change. For years now, Greta Thunberg and many other teen climate activists from around the world have been lobbying governments as well as organizing marches and walkouts. (It’s worth mentioning that their work is a lot tougher, more labor-intensive and more dangerous that wearing a particular T-shirt to an award show.) Kids commandeering the media for progressive purposes isn’t anything new, either. The 1968 Democratic National Convention in Chicago helped to galvanize public sentiment against the Vietnam War—and against a government that would literally attack its own children to justify it—because TV cameras captured so much police mistreatment of the young people protesting against one of the greatest threats to their generation. Fully aware that the optics of the situation were on their side, the demonstrators famously chanted, “The whole world is watching.”

But this weekend’s spectacles hinted at how a generation growing up on social media might go about using live TV for change. As streaming increasingly overtakes linear television and viewership of even live events like sports and award shows shrinks, Gen Z activists seem to realize that such telecasts are only as effective as the unscripted, viral moments that come out of them. Raised on memes, with their simple, economical juxtapositions of image and text, they’re also capable of crafting (or appropriating) pithy statements that are as easy to get stuck in your head as the lyrics of pop songs. Along with the message about the climate crisis comes a message about technology: The whole world is still watching—it’s just doing so on the tiny screen of a mobile device set on silent. 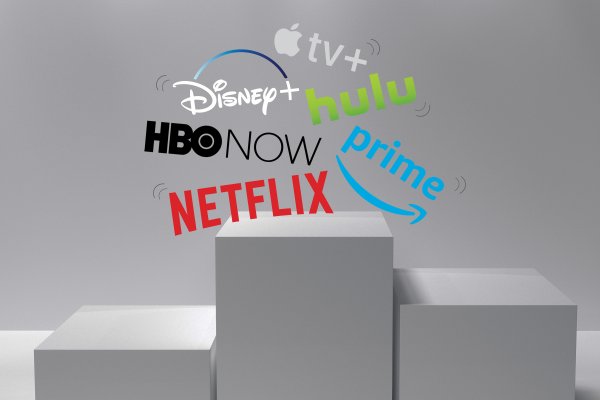 The Streaming Wars Are Finally in Full Swing—And the First Casualties Are Coming Into View
Next Up: Editor's Pick