Rain and Snow Could Make Traveling Back From Your Thanksgiving Feast Difficult. Here’s What to Know

After overloading on turkey, Black Friday deals and family, it’s time to travel home after this Thanksgiving holiday. But the weather might make things difficult depending on where you are in the U.S.

According to the National Weather Service (NWS), the Upper Mississippi Valley, the Upper Great Lakes and the Sierra Nevadas will all be hit by heavy snow through Monday night. Meanwhile, the Northeast and parts of the Great Lakes are being hit with freezing rain, and there’s a slight risk of severe thunderstorms over parts of the Lower Mississippi and Tennessee Valleys.

“A significant storm continues its eastward movement this weekend impacting post Thanksgiving travel,” the NWS tweeted late Friday night. “Widespread snow, areas of ice, and powerful winds from the Northern Tier states into the Northeast can be expected. A new CA storm will bring feet of mountain snow this weekend.”

Here’s what you need to know about the most disruptive storms coming through this weekend.

Snow adds to misery out West

The NWS predicts that a “plume of moisture” will enter California on Saturday and continue through the weekend, which will lead to rain at lower elevations and snow in higher elevations.

Flooding is possible in north California, especially in areas affected by wildfire.

The Sierra Nevada mountains could once again see feet of snowfall, and lighter snow will spread into the intermountain West on Sunday.

The West Coast has already been hit by huge amounts of snow. As of Friday afternoon, some higher elevations in southern California had seen up to four feet of snow.

Heavy Snow in the Midwest

The Upper Mississippi Valley and the Upper Great Lakes will face heavy snow on Saturday through Sunday evening, per the NWS. The storm will move eastward and off the Northeast Coast by Monday morning.

Freezing rain and sleet will also develop in the lower Peninsula of Michigan overnight on Saturday and into Sunday morning, the NWS predicts.

Blizzard warnings are in effect through Sunday morning in parts of the northern High Plains and the Great Lakes. The NWS cautions travel could be difficult, and urges drivers to be careful.

The NWS Sioux Falls warns that a mix of drizzle and freezing rain that’s hitting the region will transition to snow Saturday night.

Freezing Rain and Snow in the Northeast

That storm will then move eastward, bringing freezing rain to the Northern Mid-Atlantic on Saturday night and then up to Southern New England on Sunday evening and Monday morning, per NWS.

On Sunday afternoon that rain will turn into heavy snow, will will drop over the Northeast into Monday. Parts of New York, southern Vermont, southern New Hampshire and Massachusetts are forecasted to get four to eight inches through Sunday night and Monday day.

“Difficult to dangerous driving conditions will be associated with the winter weather over the Upper Midwest into the Northeast,” the NWS warns.

Freezing rain will hit parts of Pennsylvania, New York and the Central Appalachians, per the NWS. Up to over a tenth of an inch of ice could accumulate in some areas.

Rain in the South and Midwest

Further South, that storm will create thunderstorms over parts of the Tennessee and Mississippi Valleys Saturday into Sunday, the NWS predicts. Some could become “severe.”

“The Storm Prediction Center has delineated a Slight Risk of severe weather today and tonight,” the NWS said Saturday afternoon.

The thunderstorms will then move the Southern Mid-Atlantic and the Southeast on Sunday, and go off the East Coast by Sunday night, per the NWS.

Rain will also hit parts of the Middle Mississippi Valley and move into parts of the Great Lakes and the Ohio Valley Saturday night, per the NWS. On Sunday, the rain will become snow.

Flight delays hit the U.S. on Saturday — more than 3,300 flights within, into or out of the U.S. were delayed as of Saturday according to FlightAware. Over 600 have been canceled.

Many were in California or the Midwest.

Andrew Orrison of the National Oceanic and Atmospheric Administration’s (NOAA) Weather Prediction Center advises that people should keep track of flight schedules and weather reports. Travelers in areas affected by severe weather later in the week should try to leave earlier, if possible. 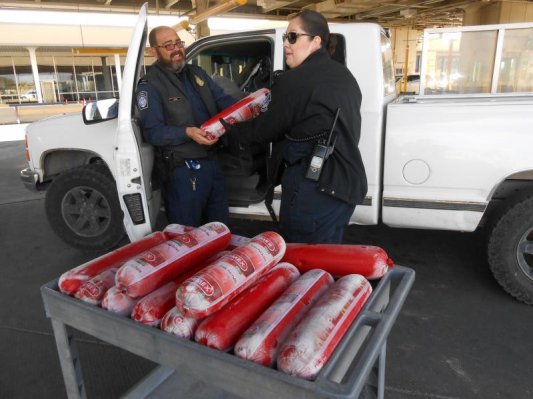 CBP Seizes 154 Pounds of Bologna
Next Up: Editor's Pick