Law enforcement in Union City, Calif., received multiple 911 calls reporting gunshots around 1:30 a.m., according to a statement from the Union City Police Department on Saturday. When police arrived, they found the victims in a parking lot belonging to Searles Elementary School, the statement said, noting that the 14-year-old boy was pronounced dead at the scene, while the 11-year-old boy was pronounced dead while en-route to a local trauma center. The children had been sitting in a van when they were “confronted by unknown suspect(s) who shot into their vehicle multiple times,” police said.

Union City Police continue to investigate the case and said in the statement that no suspects are currently in custody and the victims have not yet been identified.

The New Haven Unified School District also issued a statement on Saturday about the shooting, explaining that “one victim was a student who attended school within the district” and the other victim was a former student in the district. The school district said they are working closely with local police and will have “support for students and staff at the sites where these students attended when school resumes after the Thanksgiving break.”

Less than two weeks ago, on Nov. 15, the Bay Area school had issued a statement about “safety-related incidents” at its schools earlier this year, including a rumor that a student brought a firearm to one of the elementary schools. That rumor was being investigated, the district said.

Police are also considering whether Saturday’s shooting may have any links to an earlier incident on Nov. 20 in which two men were shot and wounded near an intersection in Union City and have “not ruled out the possibility that the incident was gang-related.” Investigators have retrieved evidence from the scene, including shell casings. 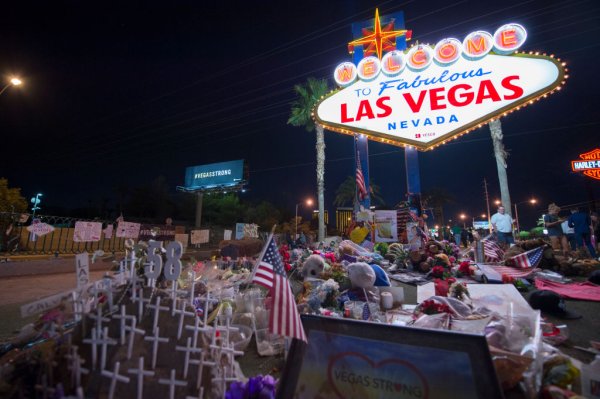 Las Vegas Massacre Claims Another Victim After Woman Dies 2 Years After She Was Shot
Next Up: Editor's Pick