Maya Rudolph’s Sen. Kamala Harris desperately tried to become a meme and America’s cool aunt, Woody Harrelson’s Joe Biden touted his support from “bl-African Americans” and Larry David’s Sen. Bernie Sanders declared he was the “first heart attack patient to show up to the emergency room in a city bus.”

Chris Redd’s Cory Booker delivered the “rehearsed joke” from the actual debate on Wednesday, telling Harrelson’s Biden, “I was stunned to hear you don’t support the legalization of marijuana. In fact — rehearsed joke — I thought you were high when you said it.”

The real Cory Booker has advocated for completely legalizing marijuana and argued during Wednesday’s debate that the drug was “already legal for privileged people” and that the current law affected people of color disproportionately. Biden has advocated for “decriminalizing” marijuana, which allow states to legalize recreational pot and expunge marijuana-related convictions.

During the SNL sketch, Kate McKinnon’s Sen. Elizabeth Warren showed up to the debate with “mom hosting Thanksgiving energy,” Rachel Dratch’s Sen. Amy Klobuchar urged the audience to stop focusing on her quivering bangs and former New York City Mayor Michael Bloomberg, played by Fred Armisen, showed up long enough to sneak some in some Spanish. “Miguel Bloomberg is on fuego,” he said.

Cecily Strong’s Tulsi Gabbard played the villain of the debate. She assured the audience that she, unlike Cruella de Vil, has “no interest in those Dalmatian puppies” — despite eerie background music that played when she spoke. 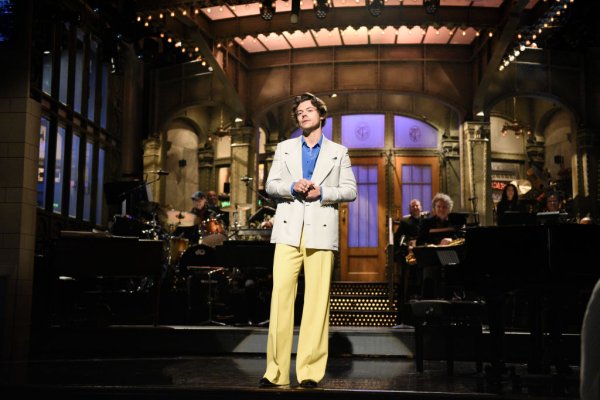 SNL Turns Impeachment Hearings Into a Soap Opera
Next Up: Editor's Pick