What We Can Learn From the Near-Death of the Banana

Much of the world's bananas are of the Cavendish variety, which is endangered by a strain of Panama disease.
Frank Bienewald—LightRocket via Getty Images
By Anna Purna Kambhampaty

The banana has been the subject of Andy Warhol’s cover art for the Velvet Underground’s debut album, can arguably be the most devastating item in the Mario Kart video game franchise and is one of the world’s most consumed fruits. And humanity’s love of bananas may still be on the rise, according to data from the Food and Agriculture Organization of the United Nations. On average, says Chris Barrett, a professor of agriculture at Cornell University, citing that U.N. data, every person on earth chows down on 130 bananas a year, at a rate of nearly three a week.

But the banana as we know it may also be on the verge of extinction. The situation led Colombia—where the economy relies heavily on the crop, as it does in several other countries including Ecuador, Costa Rica and Guatemala—to declare a national state of emergency in August. Banana experts around the world have raised concerns that it may be too late to reverse the damage.

The reason for the problem comes down to a single disease, but it also has far-reaching implications—and the world is watching. Even if the world’s relationship to bananas may never be the same, the lessons of the fruit can still save us from damage that could hit far beyond the produce aisle.

“The story of the banana is really the story of modern agriculture exemplified in a single fruit,” says Daniel Bebber, who leads the BananEx research group at the University of Exeter. “It has all of the ingredients of equitability and sustainability issues, disease pressure, and climate change impact all in one. It’s a very good lesson for us.”

Ninety-nine percent of exported bananas are a variety called the Cavendish—the attractive, golden-yellow fruit seen in the supermarket today.

But that wasn’t always the case. There are many varieties of banana in the world, and until the later half of the 19th century, the dominant one was called the Gros Michel. It was widely considered tastier than the Cavendish, and more difficult to bruise. But in the 1950s, the crop was swept by a strain of Panama disease, also known as banana wilt, brought on by the spread of a noxious, soil-inhabiting fungus. Desperate for a solution, the world’s banana farmers turned to the Cavendish. The Cavendish was resistant to the disease and fit other market needs: it could stay green for several weeks after being harvested (ideal for shipments to Europe), it had a high yield rate and it looked good in stores. Plus, multinational fruit companies had no other disease-resistant variety available that could be ready quickly for mass exportation.

The switch worked. As the Gros Michel was ravaged by disease, the Cavendish banana took over the world’s markets and kitchens. In fact, the entire banana supply chain is now set up to suit the very specific needs of that variety.

To the people who pay attention to such things, it wasn’t long before a case of banana déjà vu set in: the Cavendish had supplanted the Gros Michel, but—even though it had initially been selected for being disease-resistant—it was still at risk. Almost a decade ago, Dan Koeppel, author of Banana: The Fate of the Fruit That Changed the World, warned in an NPR interview that Panama Disease would return to the world’s largest banana exporters, and this time with a strain that would hit the Cavendish hard. “[Every] single banana scientist I spoke to—and that was quite a few—says it’s not an ‘if,’ it’s a ‘when,’ and 10 to 30 years,” he said. “It only takes a single clump of contaminated dirt, literally, to get this thing rampaging across entire continents.”

Sure enough, the confirmation of the presence of Tropical Race 4 (TR4), another strain of Panama disease, on banana farms in Colombia, prompted this summer’s declaration of emergency there.

There are any number of ways the problem can spread. When it comes to bananas, everything from truck tires to workers’ boots can be disease carriers. But the bigger problem is how hard it is to stop. Because banana farmers are overwhelmingly growing the same exact crop—the Cavendish—they were all vulnerable to the same diseases.

“A lot of people would agree that we need to move to a more diverse, more sustainable system for bananas and agriculture in general,” says Bebber, “where we don’t put all our hope into a single, genetically identical crop.”

There’s a name for this situation: monoculture, the practice of fostering just one variety of something. Monoculture has its benefits. The entire system is standard, so there are rarely new production and maintenance processes, and everything is compatible and familiar to users. On the other hand, as banana farmers learned, in a monoculture, all instances are prone to the same set of attacks. If someone or something figures out how to affect just one, the entire system is put at risk.

And as the banana industry has begun to battle the effects of monoculture, someone else has taken notice: the tech world.

The parallel was noticed as early as the late 1990s. Stephanie Forrest, one of the early researchers in this area, commonly cites the banana problem in lectures explaining the importance of diversity in computer systems. Forrest argues that some of the most notorious software attacks in history are comparable to Panama disease’s threat to the Cavendish; uniform software systems lead to uniform vulnerabilities. For example, the 1988 Morris Worm infected an estimated 10% of all computers connected to the Internet within just 24 hours, and, more recently, the 2016 Mirai Botnet, which allowed an outside party to remotely control a network of internet-connected devices, brought down Twitter, Netflix, CNN and more.

“Monocultures are dangerous in almost every facet of life,” echoes Fred B. Schneider, a cybersecurity expert at Cornell University. “With people, of course, populations are stronger and more disease-resistant if there’s more genetic diversity. And with transportation, it’s more effective to have several different options—when a train line is shut down, if you have other choices at your disposal, like a car or another form of transit, you won’t be stuck.”

Schneider points out that software monocultures are common because, without them, using your computer would be a lot harder. Default configuration settings, for example, are the norm to help users who may not be experts in the technology they’re using. Defaults like that can protect people from some problems, but also lead to others, as all the systems using the same default are vulnerable to the same problems. Knowledge of the problem, thanks to understanding of the issues facing crops like bananas, have led technologists to take steps to introduce artificial diversity into their systems. “To make a system artificially diverse, you just rearrange its guts in ways where the differences do not affect functionality in a material way,” Schneider says. Microsoft implemented one of the first large-scale commercial developments of artificial diversity in their Windows OS system, by randomizing the internal locations where important pieces of system data were stored.

For bananas, addressing the problems caused by monoculture may be harder, as market standards and supply chains make it very expensive for fruit companies to cultivate multiple varieties.

Existing disease-resistant varieties haven’t made inroads on the international market, but The Honduras Foundation for Agricultural Research (FHIA) has spent more than three years working on developing a disease-resistant variety that is as close as possible to the Cavendish, so that the world’s banana infrastructure doesn’t have to be reshaped from scratch. Still, that’s a process that can take 15 to 20 years, Bebber estimates.

Genetic engineering can lead to the development of new varieties at much faster rates than traditional breeding methods, but it can also turn consumers off. However, it has been the answer to similar problems in the past—for example, when the papaya ringspot virus threatened the papaya supply in the 1990s, “the major supply shock was averted through the development of a transgenic ringspot virus-resistant papaya,” explains Cornell’s Barrett. He believes that consumers’ fears might ease if it becomes one of the only viable answers to the issues created by monoculture production. The UK-based biotech company Tropic Biosciences has received $10 million in funding to use gene-editing technology to research solutions to widespread issues with tropical crops, focusing specially on disease resistance in bananas.

And while even the most Cavendish-like of FHIA’s disease-resistant varieties, a banana known as the FHIA-18, hasn’t yet met the standards of multinational buyers, that may change, according to Adolfo Martinez, director general of FHIA. “It’s still not close enough to the Cavendish,” he says, but he thinks the crisis may convince them. “Maybe now, companies will be more interested in it.”

So, what’s next for the banana? Will it simply disappear from our diets, album covers and video games? Bebber says the banana may change, but hopes are high that it won’t completely vanish. “Science,” he says, “will find a way.” Meanwhile, tech researchers are watching—hoping they can once again learn a lesson from biology, learning how to prevent a crisis before everything goes bananas. 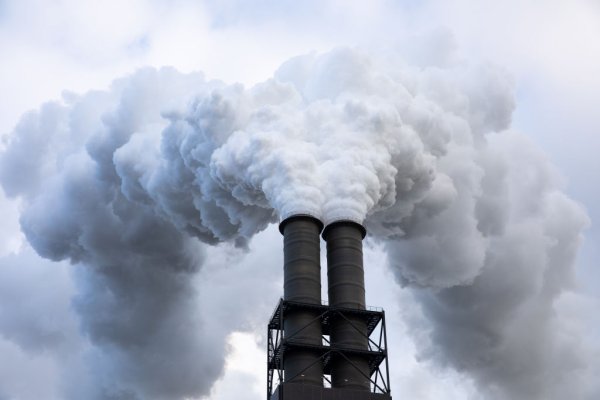 Countries Are Falling Far Short on Action to Tackle Climate Change as Fossil Fuel Use Increases, Says Energy Report
Next Up: Editor's Pick