'It's Like a Clark Kent Hair Swoosh.' Here's What We Know About the Extra Tail on Narwhal the 'Unicorn' Puppy's Head

Turns out the “tail” on Narwhal the “unicorn” puppy’s head is basically just there so we can all fawn over it. If you haven’t yet had the privilege of seeing the photos and videos of Narwhal making their way around the web, then allow us to introduce you to the now-internet famous pup.

Narwhal became a near instant viral star this week after the Twitter account WeRateDogs tweeted out a series of pictures showcasing the extra appendage growing out of his forehead. The Wednesday tweet has since garnered over 603,000 likes and nearly 129,000 retweets, and soon after its posting, celebrities like Zach Braff were also tweeting about how adorable Narwhal was.

Rochelle Steffen, the founder and owner of Mac’s Mission, the special needs dog rescue that took Narwhal in on Nov. 8, says the face tail serves no real function and doesn’t affect his everyday life.

“It’s like a Clark Kent hair swoosh. It’s not in his way at all. It just stays right in between his eyes and has a little bit of a curl under,” she tells TIME. “For the most part, he doesn’t even understand that he has it. He just goes around and does what he’s going to do and doesn’t care.”

However, Steffen says that the vet who examined Narwhal’s face tail told her there is a scientific explanation for its existence — but it may be difficult to identify. “We had the discussion the day we did the x-rays,” Steffen says. “There’s the possibility that he absorbed a twin because they do that in the womb. Or it could just be a random extra part that formed on him without anybody understanding why. [The vet] said figuring out the cause is probably pretty impossible.”

Steffen previously shared on Facebook that the vet had concluded the extra tail, which isn’t connected to anything, is harmless in its current state. Although it doesn’t wag like a normal dog tail.

“Dr. Heuring said there is no real reason at this time for the unicorn tail to be removed (and we all wish it wagged)!!” Mac’s Mission wrote in a Nov. 12 Facebook post. “The unicorn face tail does not bother Narwhal and he never slows down just like any normal puppy. He seems completely healthy other than some usual puppy worms he got meds for.”

However, for all of you wondering if this unique and adorable pup could be yours, Narwhal apparently won’t be up for adoption until Mac’s can ensure that his face tail isn’t going to have a growth spurt and become an issue. That doesn’t mean there aren’t people already expressing interest in giving him a forever home though. Steffen tells TIME that when she last checked on Thursday, Mac’s had received about 300 adoption applications for Narwhal.

“We want to watch him grow for a little while. At the very earliest, it would probably be about a month before we post out that we’re accepting applications,” she says. “We just want to make sure that [the tail] doesn’t turn into like, an elephant tusk, and become a problem.”

For now, Steffen says that Narwhal is just being given the opportunity to live life as the fun-loving pup that he is. “He’s just being allowed to be a puppy,” Steffen tells TIME. “He’s learning how to potty train, he’s playing with toys, he’s getting treats and everybody’s fighting over holding him…He just makes you smile.” 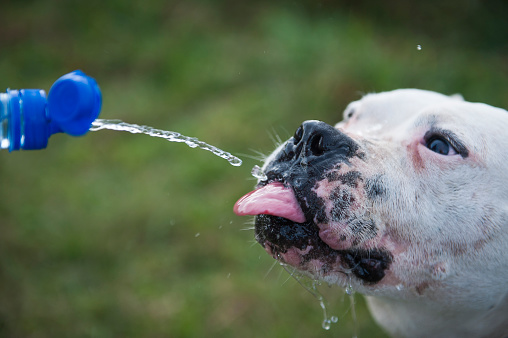 Dog Trying and Failing to Figure Out Own Personal Fountain Is a Struggle We Can All Relate to
Next Up: Editor's Pick