We Are Wasting a Massive Amount of Food. Here Are 4 Concrete Ways to Change That

Michael Shank, PhD, teaches sustainable development at NYU’s Center for Global Affairs and is the communications director at the Carbon Neutral Cities Alliance.

Bishop Marcelo Sánchez Sorondo is the Chancellor of the Pontifical Academy of Sciences.

Food waste might be finally getting the focus it deserves. From Washington D.C. to the Vatican, world leaders are stepping up their efforts to reduce food waste. In Washington D.C. last week, the US government announced a new Food Waste Reduction Alliance to formalize federal agency, food manufacturer and restaurant association collaboration to reduce food waste 50% by 2030.

And in Vatican City next week, the Pontifical Academy of Sciences is hosting a major summit on reducing food loss and waste, putting the issue front and center for the Catholic Church. This builds on Pope Francis’s mantra that “to throw food away means to throw people away” and the Catholic Church’s teachings to ask for daily food for all – that it’s a moral obligation to ensure that everyone has enough food, which includes avoiding food loss and waste.

This doubling-down on food waste by world leaders is heartily welcomed. We’re wasting too much food, money, opportunities and resources. Around the world, roughly one-third of all agricultural land produces food that is lost (in the production phase) or wasted (in the retail and consumption phase). That’s more than 1.3 billion metric tons of edible food. And the entire supply chain is responsible, from poor climatic conditions to produce damaged at farms to improperly stored food to eating habits and more. When this food goes uneaten, we waste the water and energy needed to produce it, harvest it and bring it to market. And the economic, social and environmental impacts of this practice are devastating.

Economically speaking, this costs our communities dearly. Industrialized countries are losing $680 billion and developing countries are losing $310 billion. The financial hit to our economies, of this lost or wasted food, runs nearly $1 trillion dollars. To put this financial loss in perspective: If we wanted to deliver clean water and sanitation to the world for a year, it’d cost only $150 billion. What a preventable waste, then, that could free up new monies for essential poverty-alleviating projects, which is the focus of the next section.

Socially speaking, the food wasted could feed the world if we better managed the food supply chain. The Food and Agricultural Organization found that “consumers in rich countries waste almost as much food (222 million tonnes) as the entire net food production of sub-Saharan Africa (230 million tonnes)”. What an incredible waste, then, especially when over 800 million people go hungry. We must do better. The World Bank estimates that just a 1% reduction in post-harvest losses could yield gains of $40 million each year, the majority of which would go directly to small farmers growing the food while helping local economies. That’s a win-win socially and economically.

Environmentally speaking, if food waste were a country it’d be the third-largest emitter of greenhouse gases, behind China and the U.S., a fact reiterated by a senior UN climate official attending this month’s international Zero Waste Summit in Istanbul. The carbon footprint is formidable. Food waste and loss contributes to approximately 8 percent of greenhouse gas emissions. To put that in comparison, that’s equal to the apparel industry, which also contributes 8 percent of global greenhouse gas emissions, and greater than the airline industry, which is roughly at 2.5 percent of global gases. Food is the low-hanging fruit, then, in the carbon-reduction agenda. It’s much easier to tackle immediately.

How do we save our economies, societies and environments from the deleterious impacts that come with food waste and food loss? A good overhaul of the food system is needed but let’s start with a few concrete next steps.

First, we need to change social norms that exacerbate food waste. It’s too easy to waste food as there are no consequences for throwing food away. That needs to change. We can all shop smarter and stop over-serving ourselves and others. Big portions lead to big waste. Our shelves – whether at market or at home – don’t have to be stocked full all the time. And with better access to daily or weekly local farmers’ markets, it’ll be easier to get what you need for the next few meals, avoiding the waste that comes from stocking up for weeks. Additionally, let’s eat more ugly fruits and vegetables, which are tossed out for cosmetic reasons. The preference for a straight carrot versus a crooked one is part of a norm that generates high percentages of food waste. These norms are changing, thankfully, and there’s a growing market for ugly fruit. But more is needed.

Second, we need to rethink arbitrary expiration dates in places like the United States. Most people don’t realize that these dates are set by companies, not health agencies, with the intention that you buy more food. The lack of federal standards leads to vast inconsistencies, and often means food that could still be eaten ends up in the trash instead.

Third, our local governments, which are often responsible for the collection of household scraps, can play a major role in reducing food waste. In San Francisco, for example, which has a zero waste goal by 2020, they’ve diverted waste from the landfill by over 80 percent, and they’re transforming food waste into compost and selling it back to farmers. That’s good for soil health and its ability to retain water, and it cuts down on irrigation as well as fertilizers and pesticides. San Francisco’s approach to food waste as a resource – which is what cities in the global south, like Rio de Janeiro, are also doing by salvaging food waste – is a win for the city, its economy, its farmers and the environment.

Fourth, we need better refrigeration to prevent food spoilage. Many countries don’t have the capacity to keep food cold when it’s stored or transported. If they had the capacity to build a “cold chain” – with the necessary refrigeration along the way – a lot less food would be wasted when moving food from farm to market. Countries that already have refrigeration need to significantly increase their energy efficiency so that this expansion is done sustainably elsewhere.

This, and more – like switching to plant-based diets – is the way forward, which is why the Carbon Neutral Cities Alliance helped co-found the Cool Food Pledge to scale up climate-friendly foods. It’s good that global leaders are finally putting this front and center on their policy agendas. The world is watching, and now it’s time for us to stop wasting. 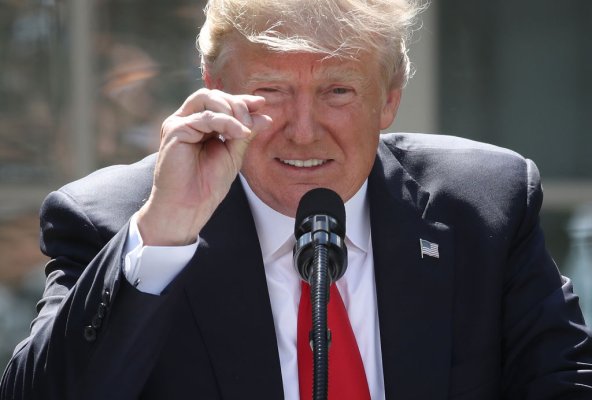 How Trump Is Trying To Spin His Paris Agreement Move
Next Up: Editor's Pick