The best toys of 2019 can hatch, tumble, light up, battle, and more. Some of the toys, such as Kano’s coding kits or Lego’s Hidden Side play sets, let users create or discover new worlds. Others, like Pictionary Air or the smART Pixelator, offer a new, high-tech upgrade to timeless kid-approved activities. Here, the editors of TIME for Kids round up the best toys of the year.

TECH WILL SAVE US

Ready to rock out? Kids can build their own mini electric guitar and amplifier from scratch with the Tech Will Save Us Electro Guitar Kit. Interactive step-by-step online instructions teach you how to put the instrument and amp together with cardboard, rubber bands, and other provided materials. Kids can then use video tutorials and an online recording studio to learn riffs, record sounds, and share tracks. The do-it-yourself kit takes music education to a whole new level. (Ages 8+)
Buy Now: Electro Guitar Kit

Maybe the best way to learn about robots is to build one yourself. And My Robotic Pet—Tumbling Hedgehog, by Thames & Kosmos, might be the cutest robot around. First, it must be constructed from 172 pieces, including gears, motors, and sound sensors. A colorful manual alongside a comic-book story will guide you through the process. But building it is only half the fun. Once you’re done, the bionic hedgehog responds to sound commands. Different patterns of claps make it bristle, tumble, spin, and more. (Ages 7+)
Buy Now: My Robotic Pet—Tumbling Hedgehog

There’s something so satisfying about completing a hands-on art project. Y’Art makes that easy. These yarn-art kits give “by-number” projects a new dimension. Kids use the included yarn to create colorful, textured art pieces. Choose from a selection of designs—from the simple Y’Art Pug Puppy to the more complex Y’Art MasterPiece—The Starry Night. The best part? They’re mistake-proof: If you place the yarn in the wrong spot, just pick it up and go again. (Ages 8+)
Buy Now: Y’Art Pug Puppy; Y’Art MasterPiece—The Starry Night

Back to the Drawing Board

A well-loved game makes a high-tech comeback. Pictionary Air offers a fun twist on the classic sketch-based version of charades. The original Pictionary relied on pen and paper. But this new version gets players up and moving in a whole new way. To get started, download the free app. As players take their turns drawing in the air with a high-tech pen, point the device’s camera at them. They’ll appear on a phone, tablet, or TV screen along with the sketch they’ve created. (Ages 8+)
Buy Now: Pictionary Air

Come Out of Your Shell

Want to train a dragon? Hatching Dragon, based on the popular How to Train Your Dragon franchise, lets kids do just that. The baby dragon’s name is Toothless, and he comes inside an egg. Make him angry, and he’ll move, shake, light up, and tap to be let out. When he’s mad enough, he’ll hatch. Once he’s out, he can play games like Toothless Says, Hot Potato, or Ask Toothless. You can teach him how to fly and dive-bomb, too. But there’s more to Toothless than just being playful. Put your hand over his head, and he’ll purr with affection. (Ages 4+)
Buy Now: Hatching Dragon

Step into otherworldly adventures with Kano’s Disney Frozen 2 Coding Kit and Star Wars the Force™ Coding Kit. From conjuring ice castles to creating spaceships, these new-for-2019 kits let users build the Frozen and Star Wars worlds while learning how to code. Kids build a sensor that connects to an app. The sensor picks up hand motions, which lets you swing a lightsaber, create a powerful blizzard, and more. (All ages)
Buy Now: Disney Frozen 2 Coding Kit; Star Wars the Force™ Coding Kit

A Smart Way to Art

If Perler Beads and Lite-Brite—two classic, kid-approved crafts—joined forces, the result would be smART Pixelator. With smART Pixelator, kids can create their own digital designs and bring them to life. First, upload a photo to the free app, which pixelates the image. The app sends the pixelated image via Bluetooth to the beading device. Easy-to-follow light technology shows you where to place the beads. Just trace the pattern to make your creation. The app also comes with loads of graphic designs to choose from, and for extra fun, the company offers sequins and pegs that can be used instead of beads. (Ages 7+)
Buy Now: smART Pixelator

Playmobil’s Mars Space Station is the ultimate extraterrestrial play set. The 187-piece kit features everything from sleeping compartments to fitness equipment and a lab for analyzing samples. The main control center lights up, makes sounds, and features a removable roof. And two docking stations can be attached to other Playmobil space sets to create an even bigger base for exploring the cosmos. The set also includes two astronauts, plus all the tools and food they need to survive and thrive in outer space. (Ages 6+)
Buy Now: Mars Space Station

Drive Me up the Wall

Battle of the Bots

3Doodler’s Start Robo Sumo 3D Printing Pen Set lets you use a kid-safe version of 3Doodler’s plastic-melting pen to create your own robots. Then you can cheer your robots on as they battle it out in the ring. The kit comes with molds to make arms, gears, wheels, and other robo-parts. The plastic also acts as a glue, so you can attach the robo-parts to one of two rumbling motors. Turn on the motors, place your bots in the center of the ring, and watch them fight to the finish. May the best robot win! (Ages 6 to 13)
Buy Now: Start Robo Sumo 3D Printing Pen Set 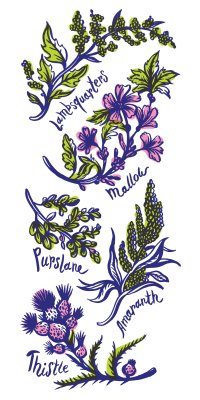 Why Modern-Day Foragers Want You to Eat Weeds for Dinner
Next Up: Editor's Pick