The Fall of the Berlin Wall Seemed Like a Victory for Democracy. 30 Years Later, Both Sides Are Losing

Thirty years ago, the fall of the Berlin Wall seemed to mark the victory of capitalism and democracy in the Cold War. The George H.W. Bush Administration proclaimed a “Europe whole and free” and a new international order, and some foreign policy specialists looked forward to an era of U.S. hegemony. In the succeeding three decades, however, it has turned out that both sides lost.

The year 1989 brought to a close a century of strong governments, massive spending on public goods, decreasing inequality and political engagement. The fall of Communism allowed the West—and particularly its leader, the United States—to go in any direction that it wanted. The direction it chose, however, unleashed powerful economic forces that had been kept in check since the Great Depression, thus weakening political structures. Today, to a degree that would surprise anyone in 1989, we might be forgiven for missing the Cold War.

In 1942, at the height of the Second World War, Vice President Henry Wallace declared the 20th century “the century of the common man.” The war pitted the United States and its allies, who wanted freedom and economic security for ordinary people, against the Nazis and their allies, who would reduce them to slavery. The wartime alliance between the U.S. and the USSR obscured the enormous differences between them, and both claimed to be fighting for democracy. In the postwar period they quickly came into conflict in both Europe and Asia, and both Moscow and Washington cast themselves as the model for the rest of the world, and the hope of the masses.

As the Cold War began, while the Soviets imposed Communism in the nations their armies occupied, the Western Europeans adopted the principles of the American New Deal and built welfare states with strong labor movements. They saw that meeting the needs of the working class could insure against the growth of any new totalitarian movements. And in the rest of the world, both the U.S. and the USSR encouraged decolonization and argued that newly independent states should adopt their model. Any new nation could secure material and political assistance simply by allying itself with one side or the other.

The American political consensus around the Cold War broke down in the late 1960s, and a great deal of attention focused on its negative aspects for the next two decades. Its anti-Communism led to McCarthyism, destroying the careers of many innocent people in various walks of life, and it created a huge permanent military establishment. Both sides built terrifying nuclear forces. U.S. intelligence agencies helped overthrow elected governments in Iran, Guatemala, Brazil and Chile, and plotted the assassination of several foreign leaders. That, however, was only part of the story.

The worldwide political and military competition with the Soviet Union had all sorts of beneficial effects on the United States. From 1950 through 1973, the military draft drew many millions of young men into the armed forces, where they learned basic skills, secured some long-term benefits and worked with men from every part of the country and every ethnic group. Congress funded both the Interstate Highway System and the National Defense Education Act to strengthen the country in the Cold War. Americans measured the strength of their economy and its growth rates against the supposed achievements of the USSR, whose official growth rates were higher than those of the U.S. well into the 1960s. The space program, with all its technological and political benefits, also arose out of the competition with Moscow. The 90% top marginal tax rates that had financed the Second World War effort remained in place until 1964 to pay for all this. The nation also treated its trade balance as a national security issue.

While the continuing nuclear competition between the U.S. and the USSR brought the world to the brink of catastrophe at least once, in October 1962, it did not prevent the two states from working together for the common good. The nuclear Test Ban Treaty of 1963 and the Non-proliferation Treaty of 1969 tried to keep the nuclear genie in the bottle, and in the latter treaty, Moscow and Washington actually committed themselves to abandon their own nuclear weapons in exchange for the promise of other nations not to acquire them. Other arms control agreements followed in 1972, and in 1975, at Helsinki, the two nations and their allies agreed not to attempt to change the borders of European states by force.

It is clear in retrospect that the postwar orders were already in decline in the U.S. and the USSR by the 1980s. Moscow’s economy was almost stagnant, its birth rate was low and the health of its people deteriorating, and a whole generation had grown to young adulthood with no faith in the Communist system. In the United States, a new President had announced that government was the problem, not the solution, and had embarked on a path of tax cuts, deficits and deregulation, destined to transform the country within a few decades. Mikhail Gorbachev, the first Soviet leader born after the Bolshevik Revolution, came to power in 1985 determined to reform the Soviet system, but set off a process of disintegration that he could not control. In Eastern Europe, Communist regimes collapsed in 1989 when Moscow would no longer come to their support. The Cold War, suddenly, was over.

For a few years, western academics and some political leaders cherished the fantasy of the “end of history,” a world where capitalist democracy was not merely the norm but the only alternative. Democracy, however, turned out to have too few adherents in Russia and parts of Eastern Europe to flourish. The end of the Communist regime in Yugoslavia led immediately to a breakup of the country and a long, bloody civil war. Privatization in Russia created a new oligarchy, and when a strong government emerged in the early 2000s, a former KGB agent, Vladimir Putin, stood at its head. In the United States, the leaders of the postwar Boom generation seemed to feel that the collapse of Communism meant they could have anything they wanted. Deregulation, and eventually tax cuts, resumed, introducing a new series of booms and busts that culminated in the financial crash of 2008. Abroad, the George W. Bush Administration fell victim to a fantasy of a democratic Middle East, and involved the nation in catastrophic military involvements that continue to this day.

Without the unifying focus of the Cold War, the nation has sunk into tribal warfare. And in the world at large, lesser powers like North Korea, Pakistan, Turkey and Israel are pursuing their own interests without the restraints that the Cold War international system provided.

The history of the world can be viewed as a sequence of periods of stronger authority on the one hand, and greater anarchy on the other. The events of 1989 marked the beginning of the end of the first kind of era and the onset of a new age of entropy and chaos. The values that seemed so well established in the middle of the 20th century are in many ways under attack. To future generations will fall the task of crafting a more stable new order. 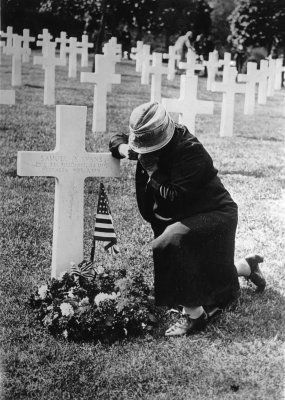 After WWI, Women Began to Make Their Way to Europe's Graves. What They Found Is Worth Remembering
Next Up: Editor's Pick