For some inexplicable reason, there has been a strange new phenomenon on the rise in recent years where people appear to be eating mayo straight out of the jar while watching their favorite teams at professional sports games.

The most recent publicly documented instance of this behavior took place at the Montreal Canadiens game against the Dallas Stars on Saturday. As the two hockey teams battled it out on the ice, one Habs fan was caught on camera spooning what appeared to be mayo out of a giant Hellman’s jar as the man sitting next to her dipped fries in it. The Stars’ Twitter account quickly took advantage of the moment and tweeted it out to the world with the caption, “Today in sports,” causing the clip to go viral.

Of course, there’s some speculation over whether the video was real or staged, with a Dallas Stars representative telling HuffPost Canada that “it would raise questions” if somebody attempted to bring a jar of mayo through security at the arena. But this also isn’t the first time this has happened.

Back in January 2017, a Belmont Bruins fan went viral for shoveling spoonfuls of mayonnaise into his mouth while sitting directly behind the commentators at a women’s basketball game. He later shared a video on Twitter of himself opening a sealed packet of mayo and slurping down its contents to prove what he was eating out of the jar wasn’t actually vanilla pudding as some people had suggested.

Another documented instance. More than a year later in March 2018, a woman watching the Detroit Pistons play the Sacramento Kings appeared on the jumbotron with a mayo jar and spoon in hand. ESPN tweeted out the video with the caption, “You know, there’s food you can put that on,” and the comments started flowing in. Some people continued to insist that the whole thing was an act.

Since then, there have been continued instances of people eating — or at least pretending to eat — mayo straight out of jumbo-sized jars at sports games. One fan at a June 2019 Memphis Redbirds game was even dubbed “Mayo Man” after the camera continued to flash back to him chowing down on the contents of his jar throughout all seven innings. However, the man in question, Clint Thrasher, was later identified as a Redbirds ticket sales employee, leading some to speculate it was all a publicity stunt.

In the end, whether or not these cases of large-scale mayo consumption are a stunt, the simple question remains: Why? 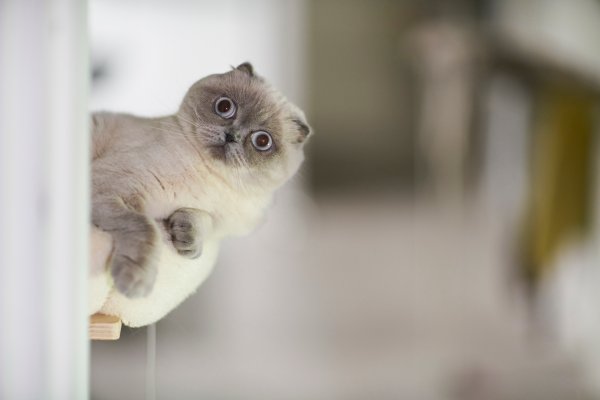 Sly Escape Artist Shelter Cat 'Quilty' Who Will Not Be Contained Keeps Freeing His Cat Comrades
Next Up: Editor's Pick