A juvenile suspect has been charged with attempted murder after a shooting on Halloween in Chicago left two people injured, one them a 7-year-old girl who was trick-or-treating.

According to the Chicago Police Department, the shooting happened around 5:30 p.m. in the 3700 block of W. 26th street on Halloween, when the suspect was allegedly targeting the other victim, a 31-year-old man. The shooter was reportedly wearing a hockey mask, similar to the horror movie character Jason from the Friday the 13th films, the Associated Press reported.

The 7-year-old victim was shot and wounded in the lower neck and was taken to Stronger Hospital, where she was listed in critical but stable condition, according to police. Police spokesperson Anthony Guglielmi tweeted on Nov. 2 that doctors are “optimistic about prognosis.”

The adult male suffered a gunshot wound to the left hand and was transported to Mount Sinai hospital in stable condition.

The child was allegedly not the target and the shooting is believed to be gang-related, according to the AP.

“This is unacceptable,” Sgt. Rocco Alioto said according to the AP. “A 7-year-old girl that was trick-or-treating with her family had to get shot because a group of guys want to shoot at another male.”

The juvenile suspect was charged Nov. 1 with two counts of attempted murder and two counts of aggravated battery and gun charges. Police later recovered a firearm that they believe is connected to the shooting. Other suspects are being pursued by police.

“Those involved don’t deserve to be in our city so I’m disgusted,” Johnson said at the press conference. “This is a crime that touches all of us. There is no place for this savagery in our city.”

The suspect appeared in court on Friday and has another court date set for Nov. 26, according to the Cook County State’s Attorney’s office. 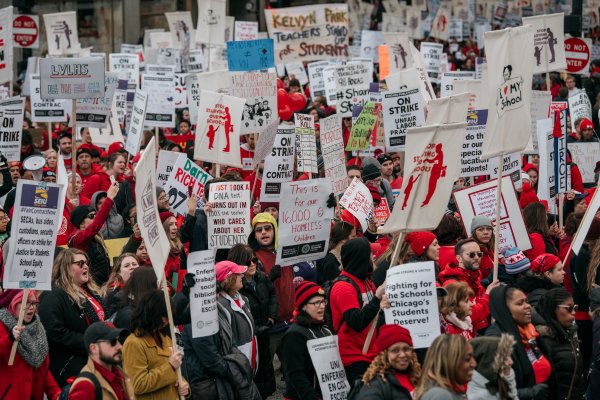 How Chicago's Teachers' Strike Extends Beyond Schools
Next Up: Editor's Pick