On Jesus Is King, Kanye West depicts himself as a lonely martyr barred from the Christian kingdom.

“They’ll be the first one to judge me / Make it feel like nobody love me,” he says of Christians in “Hands On.” In another track, “Selah,” he compares himself to a Biblical patriarch: “Before the flood, people judge / They did the same thing to Noah.”

West has certainly received a fair amount of backlash for his hard turn toward spiritual music. On Twitter, blog posts and published articles, black Christians have frequently accused West of hypocrisy and commodification — especially given his support of Donald Trump and his eyebrow-raising comment that slavery “sounds like a choice.”

But West has also received a groundswell of support— particularly from gospel artists themselves. Many of these musicians believe that no matter what they think about West’s politics, it’s more important that a prominent artist with an enormous reach is relying on gospel traditions to talk fervently about God.

“The traditional Christian church has always frowned upon anything that is new and innovative,” Richard Smallwood, the renowned gospel singer and songwriter, tells TIME. “He’s singing about Jesus Christ and God—and that, to me, is the bottom line.”

So while West paints “the Christians” as a monolith, in actuality his spiritual recommitment has opened up fissures in the black Christian community, with listeners on both sides believing that Jesus Is King has the potential to be a turning point for gospel music — for better or worse. Take a closer look at how West’s latest offering is dividing many in the spiritual community.

“Is Christ really at the center?”

In January 2019, West began his Sunday Service performance series in Calabasas, California, with the choir group The Samples and other collaborators performing a combination of hymns and secular pop songs rewritten with Christian themes. (Ginuwine’s sex jam “So Anxious,” for example, became “Souls Anchored.”) As the performances unfolded over the months, they drew skepticism from many online, who wrote that the exclusive, invitation-only events ran contrary to the open, communal spirit of church. Tobi Oredein, writing in Premier Christianity magazine, also pointed to the seemingly megalomaniacal nature of the events: “He’s employed a choir of people who are not only singing his songs, but are all dressed in his apparel. Is Christ really at the center of this gathering?”

Some of those who made it inside West’s events, however, see it differently. Dr. Ricky Dillard, a Grammy-nominated gospel singer, was invited to a Sunday Service in Malibu in April, and listened as West’s combination of gospel, hip-hop and house music reverberated around him. “It was rejuvenal, inspiring, uplifting,” Dr. Dillard told TIME. “Kanye is a part of the contemporary movement which has revolutionized music.”

Dillard dismissed the idea that the performances were Kanye-centric. “If you know God and go to one of Kanye’s worship experiences, you will experience God because you know God,” he said. He was also impressed by the way in which West ceded much of his spotlight to the choir group The Samples: “It felt like for the last few years, choirs have either been eliminated or pushed to the back,” he said. “With him coming forward with The Samples, it has turned a light on.”

“It has to reach the young people”

The choir takes a more ancillary role in Jesus Is King, which was released Oct. 25. The album mixes choral refrains, soul samples, trap drums and West’s signature autotune, as he raps about not only Jesus but Chick Fil-A and the IRS. But while the album’s sound and subject material stray from traditional gospel, his prominent predecessors say West’s modernizations are not only musically intriguing but essential toward the genre’s evolution.

Smallwood, a member of the Gospel Music Hall of Fame, says that the negative reaction to Jesus Is King continues a reactionary sentiment that has run rampant throughout gospel music history. He cites Thomas A. Dorsey—considered the father of black gospel music—and influential urban contemporary gospel singer Edwin Hawkins as two pioneers who initially faced severe resistance when they brought secular musical elements into the church.

“Gospel becomes too exclusive when people describe it,” Smallwood says, adding about Jesus Is King: “I like the sound of the music; I like the arrangements. And it has to be contemporary because it has to reach the young people.”

Bishop Marvin Sapp, an eleven-time Grammy nominee, agrees. West sampled Sapp on the 2018 Teyana Taylor song “Never Would Have Made It,” and says that West’s interpolations of him and other artists show that “the gospel music message transcends time.” And while he acknowledges that some of West’s lyrics might be self-centered or silly, he says the widely-ridiculed line about Chick-Fil-A is “a neat concept—just a wonderful angle to come from in order to spread the message of Christ.”

Alisha Lola Jones, a theologian and assistant professor of ethnomusicology at Indiana University Bloomington, says that ostensibly campy lyrics like the Chick-Fil-A line work for West on multiple levels: they ignite controversy, which increases discourse and sales; and they play to a “multiple consciousness” for younger black listeners who grew up listening to both gospel textures and hip-hop one-liners. “While he does gesture toward established gospel sounds and styles, he’s also allowed for a little bit of kitsch,” Jones says. “I can appreciate how he challenges the gospel idea where pitch has to be hit and everybody is a virtuosic singer.”

But Jesus Is King has been received coolly online, with many critics both inside and outside of the Christian community dismissing West’s pledges of faith as surface-level and disingenuous. Alicia Crosby, a minister, educator and activist, says that several key gospel elements—including musical underpinnings and sorrowful narratives—are wholly missing from the work. “You can have ‘Hallelujahs’ on a track, but it doesn’t make it gospel,” she says. “It’s weak theology, it’s not substantive, it’s not glorifying. This will confuse white audiences about what gospel is and isn’t.”

While Crosby says that Jesus Is King is a “vapid” work, her greater issue with West comes from his ongoing comments about Donald Trump and slavery. Last year, West said that wearing Trump’s MAGA hat “made me feel like Superman”; last month, he continued espousing the idea that black people had some control over their enslavement. “If they throwing slave nets again, how about we all don’t stand in the exact same place?” he asked a crowd at Howard University.

These comments have caused many to reject the album out of hand. Jones says that she’s heard of many ministers and preachers who are simply unwilling to listen to the record. After its release, the theologian Candace Benbow wrote on Twitter: “The intersection of my Blackness and my faith is too sacred and holy to listen to a Trump lover who routinely disrespects my ancestors.”

Many controversial and disgraced black celebrities, from Michael Jackson to O.J. Simpson, have returned to the black church at strategic times in order to reclaim support from the community. Ashon Crawley, associate professor of Religious Studies and African American and African Studies at the University of Virginia, wrote in an essay in NPR last month that West’s religious turn is a calculated distraction. “We are always mixing the political and economic with the religious. Kanye West has used the concept of salvation to obscure that — to disallow thoughtful engagement with his politics,” he wrote. “Kanye’s use of gospel seems to celebrate a lack of imagination, an entrenchment into the constraints of the now moment, the current crisis.”

Both Smallwood and Sapp disagree with some of West’s politics and comments. But they are willing to overlook those differences, given how West is using his enormous reach to preach Christianity to a younger and unfamiliar audience. On the day of Jesus Is King’s release, 10 of the top 12 streamed tracks on Spotify were from the album; it is expected to debut at number one on the Billboard charts next week. “His view on politics is different from mine — and that’s fine,” Sapp says. “I listen to it from the standpoint of him trying to the best of his ability to deliver a message to a really messed-up age—and I think he was successful.”

“I cannot embrace all of Kanye’s political beliefs,” Smallwood said. “But it’s about taking it to the masses. I would be glad to see the time when you can go beyond the personality and say, ‘Look, what is this person doing to help?’”

Jones says that no matter whether black Christians embrace or revile West, he wins either way. “At the end of the day, artists have to ascribe to what will make sure their product is consumed, even if it’s by people who are ridiculing it,” she says. “To me, the album’s provocations and contradictions are all that he needs to get people to listen.”

The original version of this story misstated Thomas A. Dorsey and Edwin Hawkins’ impact on gospel music. They brought secular elements into the church, not non-secular elements. 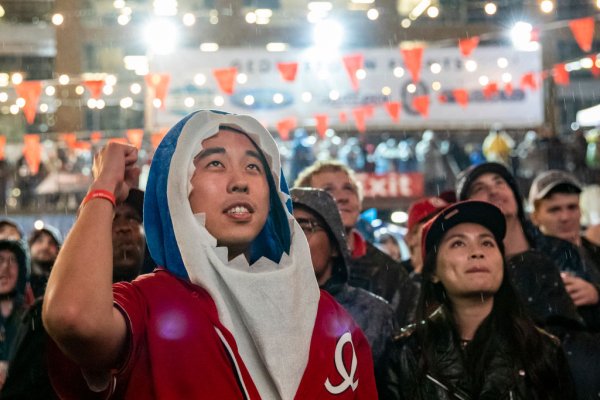 'Baby Shark' Has Made Millions for This Korean Family
Next Up: Editor's Pick